A few weeks ago, before moving into this madhouse hotel and dedicating every ounce of my sanity to the participants of the 2013 Smithsonian Folklife Festival, I wined and dined with a new acquaintance of mine and left the “where” up to him. He brought me to a place in Logan Circle (which, I am ashamed to say, I just realized was 15 minutes from my apartment) called Pearl Dive Oyster Palace. On a sunny summer afternoon, in that happiest of hours when folks leave the office and gather for small bites and merriment, it is a great little place to hang out and socialize. The restaurant itself is nice – low light, whitewashed walls and irregular exposed brick surfaces, narrow but stretching back far, comfortable and relaxing. Intimate. The oyster shucking station could’ve been a tad closer to the rest of the dining room (perhaps in the middle of it, even) for some extra atmosphere but the place does seem to specialize in prepared items more so than its raw bar, so I guess I understand why it wasn’t given that much priority.

The bar fronting the resto spills out to an outdoor area where 4-5 stools line the bar window and people stand talking, smoking, sipping pink lemonade and mid-shelf vodka with-a-touch-of-lemongrass out of mason jars. It’s a good vibe. Out of their specialty cocktails, I had the Fleur 75, with Cold River Gin, Crème De Violet, thyme, lemon and a bit of sparkling wine for fizz. I found it very refreshing on a hot day. The herbal element of thyme was nice, as was the scent of the garnish each time I took a sip. The slightly blueish-violet hue of the drink was great too. 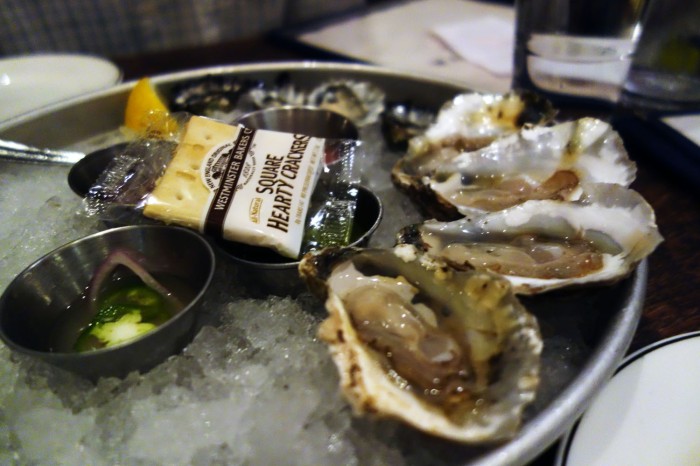 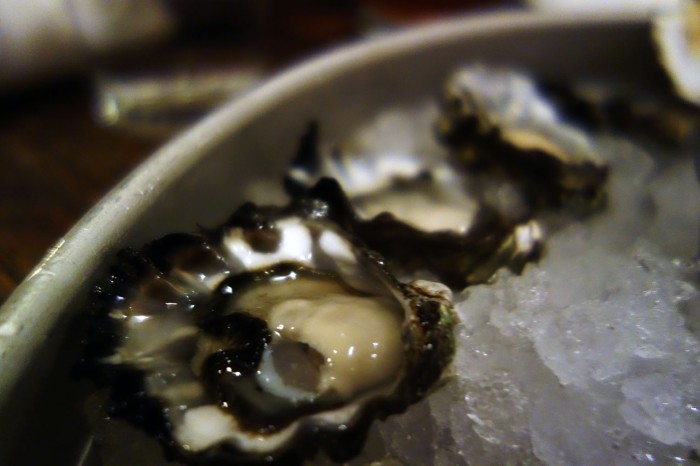 To start, we went with the Kumamoto oysters from the raw bar. These have recently become my favorite. They are quite small, but maintain a plump, firm texture instead of disintegrating into a milky, dilapidated, floppy mass. They have a sharp and concentrated flavor, salty and almost nutty at the finish. I’m not really a big oyster expert, but these really do always stand out for me. 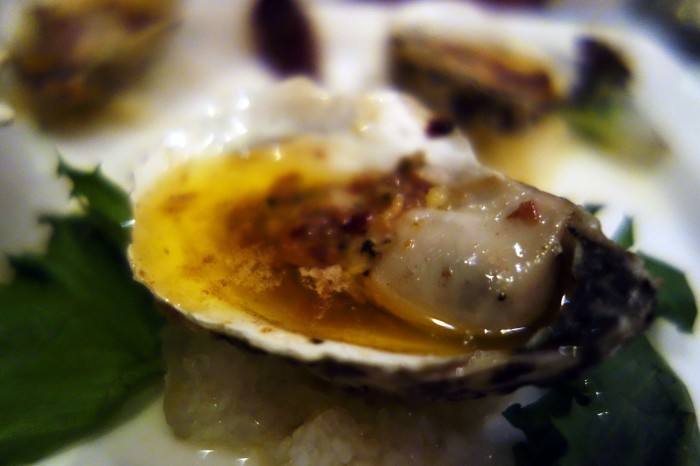 The Wood Grilled East Coast Oysters were fantastic. A warm, mushy- soft, grilled oyster with a hint of smoky flavor exuding from its flesh, topped with finely minced garlic grilled alongside it, swimming in a pool of very spicy red chile butter, which lit my mouth on fire for a few seconds after I swallowed it. The bit of citrusy (though warmed through) gremolata cooled my throat afterwards. The way that the butter dripped down my throat so smoothly, followed by the slippery mass of the oyster was very comforting. Not too complex, especially compared to the others, but one of my favorites of the night.

Next up were the sinful little Angels on Horseback, bacon-wrapped and grilled oysters topped with a creamy Vin Blanc and balsamic reduction. This one really was quite extreme. I would’ve preferred the bacon to be a tad bit crispier, although I understand this is rather hard to accomplish when it is grilled together with something, and especially when it is wrapped around something so moist. The salty, smokey, fatty bacon completely overpowered the subtle flavors of the warm oyster inside, the latter of which basically just contributed its velvety texture as canvas for the piggy flavor to splash up against. Definitely not for the oyster purist, but – then again – neither are any of the prepared oyster dishes on this menu.

The Cornmeal Crusted Chesapeake Oysters were probably my favorite of the night, proving that I am truly a Northeastern gal at heart – I like my oysters breaded and fried. In this case, the cornmeal crust was great, very light and perfectly crisp, flavored with plenty of black pepper. When bitten into, the mushy, still quite briny oyster gushed out and its flavors danced a beautiful waltz with those of the spicy, salty Andouille sausage around it, a dance of flavors which reminded me of the happy mélange of mussels and pork in some Portuguese stew. The mound of firm, then mushy sweet potato micro-hash lifting up the oyster added a lingering, root-sugar sweetness which circled back to the cornmeal and hinted at the sweetness of its origin. 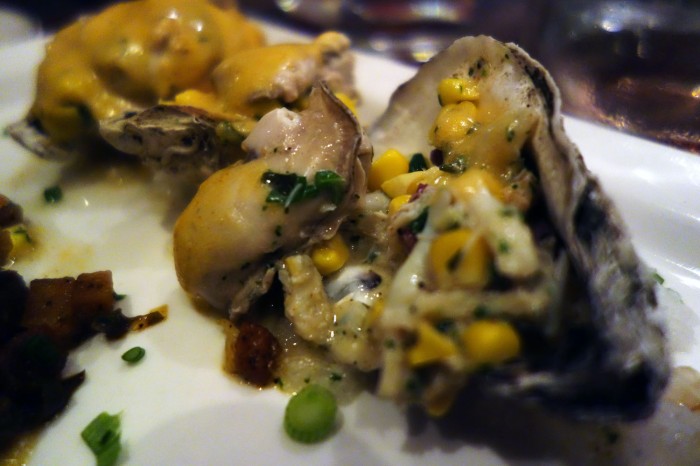 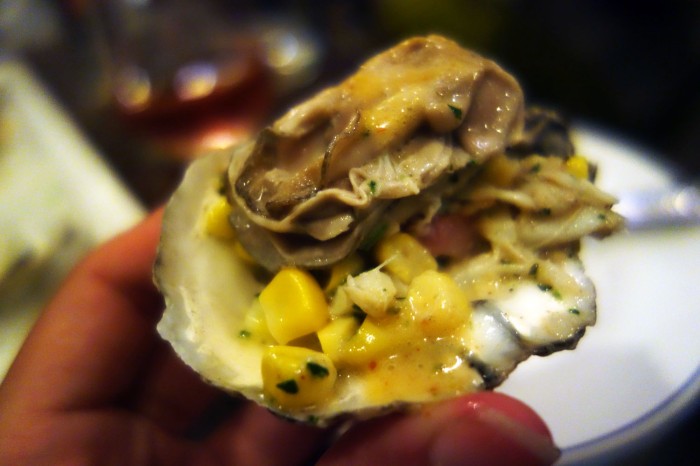 The most extreme prepared oyster dish on the menu, in my opinion, were the Tchoupitoulas. A pretty half-shell packed with fillings. A savory, creamy-smooth oyster with small cubes smokey, peppery, very salty Tasso pork at the base. The salty fat of the “ham” rejuvenated the brackish warm oyster, breathing its own piggy essence right into the oyster’s unique texture. Topping the oyster were kernels of very sweet roasted corn and some incredibly smooth, tender shreds of Blue Crab meat, which also brought a subtle natural sweetness. Finally, a creamy smooth aioli was drizzled over to hold all the ingredients together and make each bite moist and cake-y. A delightful summer dish. It seems Blue Crab really does run this town.

We decided to also order a meat dish just to try out how a non-oyster would be handled and were pleasantly surprised. The Braised Pork Cheeks were incredibly tender and fatty, but not too greasy in the least. The chipotle-ham hock broth had a deep, savory flavor, though in my opinion there was a bit too much of it and a bit too little of the creamy grits which the meat was pinned onto. The delicate, smooth grits were taken over by the sauce and diluted to the point where it was a struggle to get them on the spoon. The crispy fried onion strings around the meat were nice, adding a coarse, gritty texture from its coating and a smooth, slippery one from the softened onion inside. Overall, I wouldn’t change anything about the meat itself, maybe just tone down the broth around it.

I will definitely be returning to Pearl Dive Oyster Palace soon, on a hot summer day, especially for that easy-breezy, Ray-Ban-smile outdoor mood of the street-front bar and definitely for another one of those delicious violet gin shakes. Now if only they had the prepped oyster plates on the Bar Menu….