Wine Country on an empty stomach is never a good idea, especially on the Saturday morning after a Friday night out in Oakland. The thought ran through all three of our minds as we headed out, the trunk packed with sheer white tops and boat shoes. So we rolled back down to Oakland during brunch prime time and left our name at the host stand of Boot and Shoe Service.

While the girls waited for the man friend to park, we ordered a couple of espressos at the more express café portion of the restaurant. The hostess seemed a tad catty in telling us she couldn’t seat us in the dining room until our “entire party” (one more person) had arrived, especially considering that there were quite a few tables still available. But, when seated, our server was friendly and helpful. The interior is nice, designed with elegant high ceilings and plenty of exposed brick – a tired, cozy, sepia-tinted feel to the place. Its vibe is similar to that of Duende, an Oakland bar supposedly owned by the same folks, which has some of the best sangria I’ve had to date. The kitchen is largely exposed and a cool little bar to the back fronts a sunlit courtyard area. High top chairs and communal benches give the place a great social vibe as well. 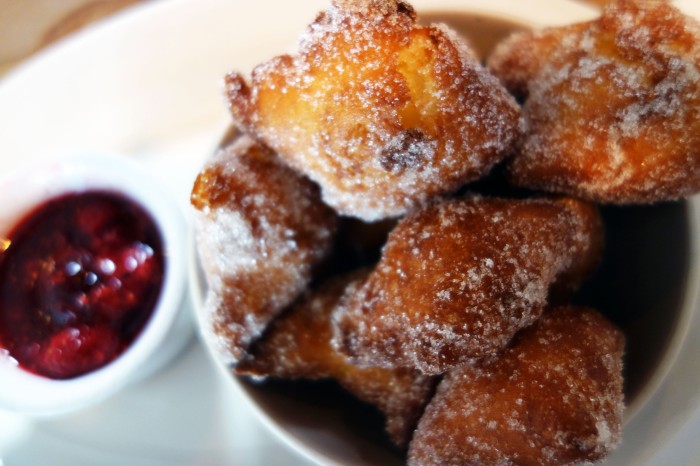 To start off with, we got 2 big old Bloody Mary’s, a glass of Prosecco for my Belgian friend and some of B&S’s Beignets with Fig Compote to soak up the hooch. When I ordered these I did so because I thought they would be a good snack to share and something to hold us over until the more time-consuming dishes came out. I wasn’t expecting them to also be the best beignets I’ve ever had. They were fluffy little clouds of heaven; the last bite just as satisfying as the first. Crispy and golden brown on the outside, with a light and spongy interior that melted after only a few chews. I actually really enjoyed that they were coated with crystalized sugar instead of powder, because it gave a nice gritty texture to keep my tongue interested, instead of just melting from the warmth beaming off the exterior. The fig and raspberry compote on the side was almost not necessary, but it gave a fantastically sweet and citrussy-tart flavor to the pastry. The texture of the compote was also quite nice, with the chewy fig and plump, moist raspberries providing great contrast to the crunchy, airy beignets. 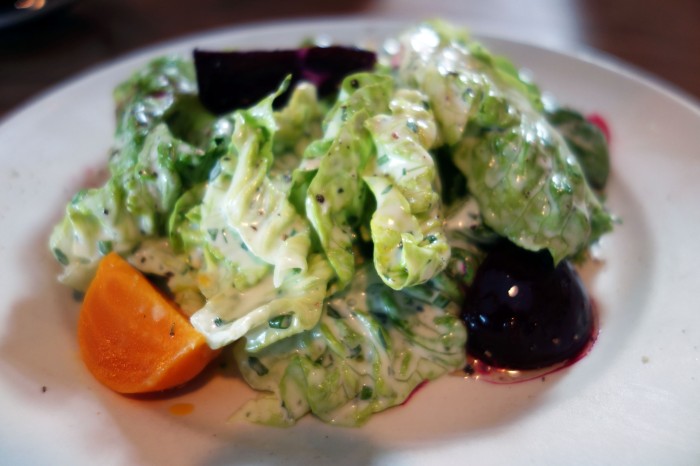 We also ordered the Blue Heron Farm Little Gems with Green Goddess Dressing and Pickled Beets salad to nosh in the meantime. Appearing quite frequently on menus I browsed while there, Little Gems really seem to be the lettuce of choice nowadays in the Bay Area. I understand why. The leaves are springy, tight and crisp, with furled edges ideal for trapping dressing. Gems are also quite petite and pretty on a plate, a bright and healthy green when fresh. And these were fresh, no doubt sourced locally, with a great, hydrating bite and a mildly sweet flavor to them. The lettuce was tossed in a light Green Goddess dressing which perked up the dish with tangy citrus and the clean flavors of parsley, tarragon and chive adding great depth. The taste of tarragon was particularly special to me as it reminded me of the tarragon-sprinkled eggs my grandfather used to make me for breakfast when I visited Hungary every summer as a child. “Táááárkony”, he would say.

A few slices of red and golden beet provided a nice meaty texture to the salad, along with a slightly piquant flavor from the red wine vinegar used to pickle them. I appreciated the fact that they weren’t soaked in vinegar for too long. The beets maintained a firm bite instead of disintegrating in the acid, and the taste of the pickle did not overwhelm the rest of the dish. 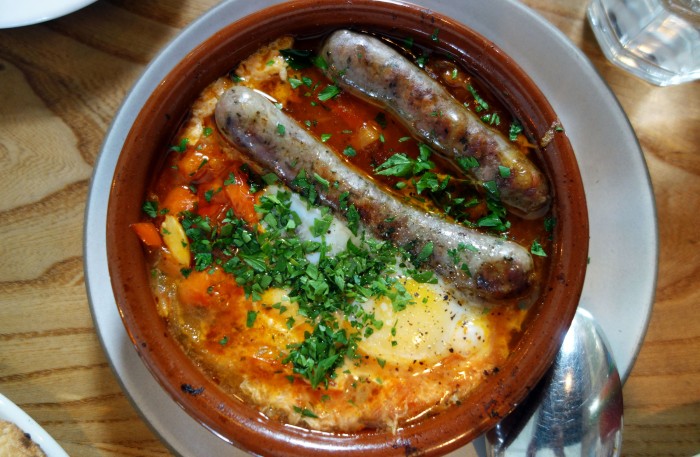 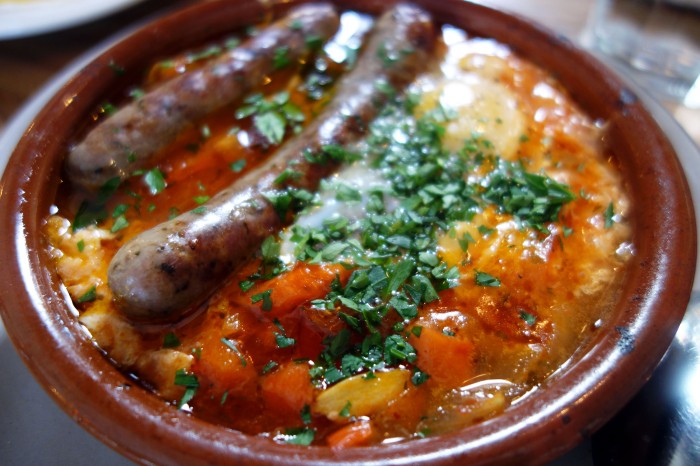 Off the brunch menu, I chose the Housemade Pork & Sage Sausage Links toasted up in the wood oven and served with a bowl full of peperonata and an egg plopped into the middle. “What is peperonata?” you ask? A colorful Italian thing made of onions, garlic and bell peppers stewed together with plenty of olive oil. Its a wonderfully vibrant and comforting dish, which reminds me of Hungarian (kinda-) gypsy dish lecsó, especially with the addition of the egg and sausages. The egg pretty much cooked itself in the heat of the vegetable ragu and reached the perfect state of being not raw, while still remaining runny and luscious. The peppers and onions were not seasoned too heavily, with the dominant flavor being the natural sweetness of the veggies and the anise-y twang of the fennel in the sausage link. The sausages were plump and juicy – tight natural casing with caramelized crispiness on the exterior and a smooth, moist grind of meat inside. Mix the yolk in to make the dish all the more decadent or eat it in one big explosive bite. It’s all good. 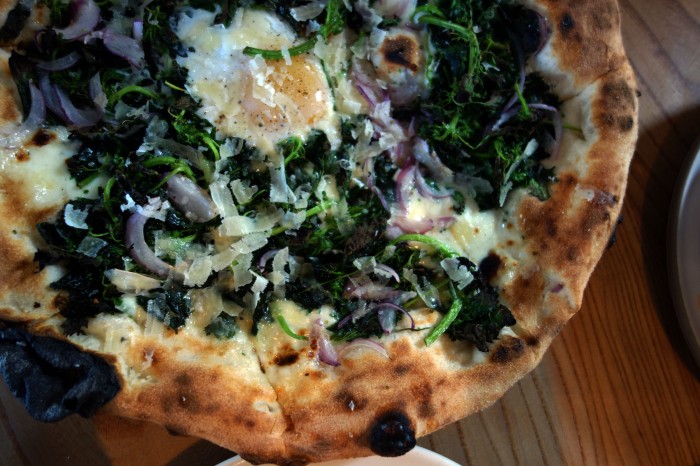 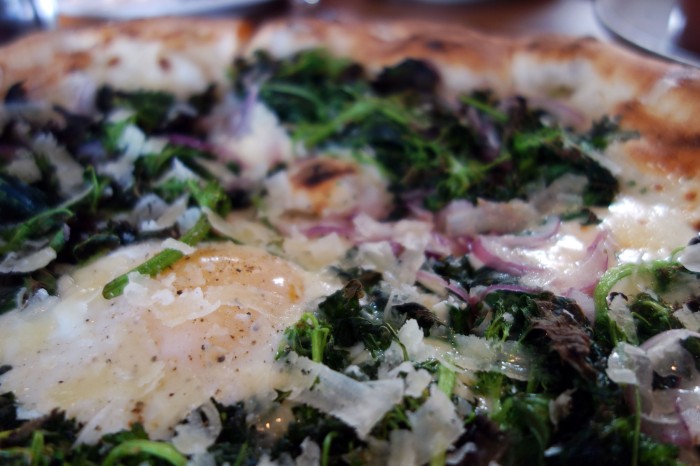 Eyeing the impressive wood-fired Mugnaini oven proudly displayed for all the dining room to see, my friend decided to order one of B&S’s signature Neapolitan-style pizzas, the Nettles and Pecorino Pizza with Farm Egg. The crust had large blistered bubbles, crispy in some parts and chewy in others, thin all around to let the toppings shine. The nettles stuck onto the thin layer of cheese were woodsy, reminding me a bit of spinach seasoned with crushed black pepper. Some very lightly roasted but still largely fresh red onion added a zing and a caramelized sweetness. Salty, nutty little curls of Pecorino cheese melted over the greens, balancing out the slight bitterness of the latter. The thick, velvety smooth yolk was meant to run over the pizza when poked into, to ooze over the nettles which would’ve hydrated the slightly dry leaves. I say “meant to” because I couldn’t help cutting out the Pecorino-sprinkled yolk and eating it in one happy bite. This left the rest of the pizza slightly dry for my taste.

We departed the place pleasantly buzzed and comfortably stuffed, ready to take on tastings aplenty. Unfortunately our culinary pit stop caused us to arrive to Napa a bit later in the afternoon than we had planned, and after our 5 for $25 flight at Robert Sinskey it was already past vineyard hour. If it had been a mediocre meal I would’ve regretted prioritizing this way. But, well, it was far from that.