Not too long ago I attended an opening party at Osteria Morini, located in the Lumber Shed building within the 42-acre space along the Anacostia Waterfront that makes up the urban, mixed-use development project called The Yards. It is the first D.C. outpost of Michael White, Executive Chef and Co-Owner of Altamarea Group, which encompasses six Manhattan restaurants (two with Michelin stars), two New Jersey restaurants, and one restaurant each in Hong Kong, London and Istanbul. The D.C. location of Osteria Morini will undoubtedly serve as a pillar in the development that the Capitol Riverfront is currently going through by providing authentic, expertly made dishes from Emilia-Romagna region of Italy and a warm, inviting, neighborhood feel to go along with it. I have already written about the opening event for another publication, so I will not be going into too much detail about the story here. Instead, I would like to present a slideshow of the delicious numnums I sampled, often miniature versions of actual menu items available to guests at Osteria Morini as of their opening day on November 19th.

As usual, I spent the evening awkwardly hawking over the open kitchen to get a feel for the prep-area atmosphere and to avoid missing something. And, as usual, this paid off. I didn’t miss a thing.

It started with a Negroni and a tray of puff pastry balls, stuffed with a smooth foie gras mousse and topped with caramelized shallots. Awesome bite-sized bursts of velvety soft liver butter, the mineral offset by the sweetness of the shallots. I’m pretty sure this was just a canope for the event and not a regular menu item but whatever…. They were great. 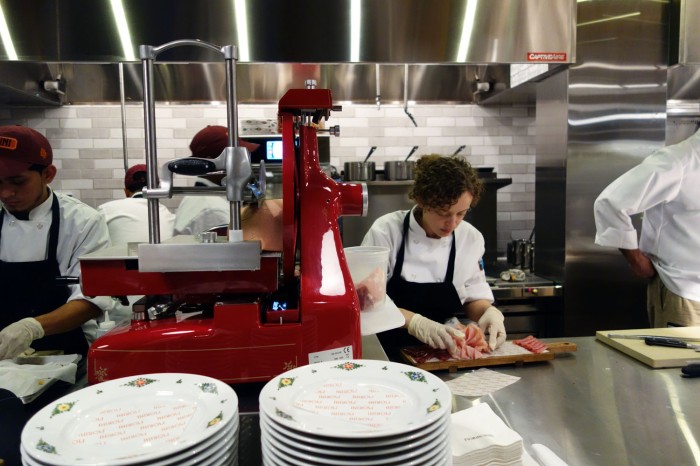 Then came a big board of Battilardo di Affettati (Italian cured meat) with Prosciutto di Parma, Felino, Mortadella and Bresaola, all freshly sliced across the counter. I watched as thin ribbons of ham and salami fluttered forth from the blades of the brilliant red slicer. My favorite was the mortadella which melted like butter on my tongue. No bread around to take the attention off the quality of the meat. No open-faced sandies, just quality deli cuts folded up and eaten on their own. 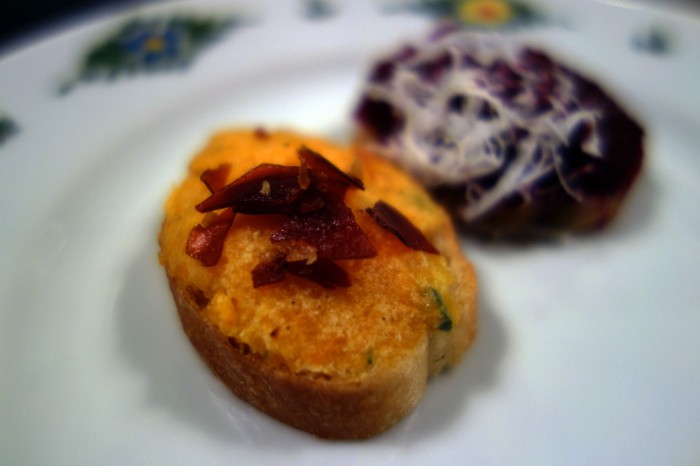 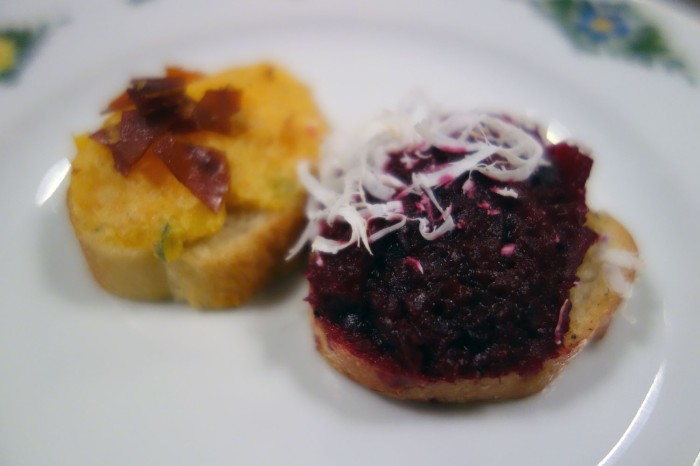 A colorful tray of crostini circulated as well, the Crostini di Zucca (with winter squash, sage and a bit of crispy speck as garnish) and the Crostini di Barbabietole (roasted beet and some tangy soft cheese shaved on). While I though the squash was a bit bland (despite the salty speck) and could have used more seasoning, the roasted beet topping had the perfect combination of natural root sweetness and earthy minerality, offset nicely by the acidity of the cheese.

There was also a crostini of whitefish sashimi with smooth mustard crema, which definitely hit the spot, but which does not seem to be on the regular menu. It should be. The fish was fresh and cool, with the acidity and heat of the mustard picking up any trace excess of fishy oil in the flesh. 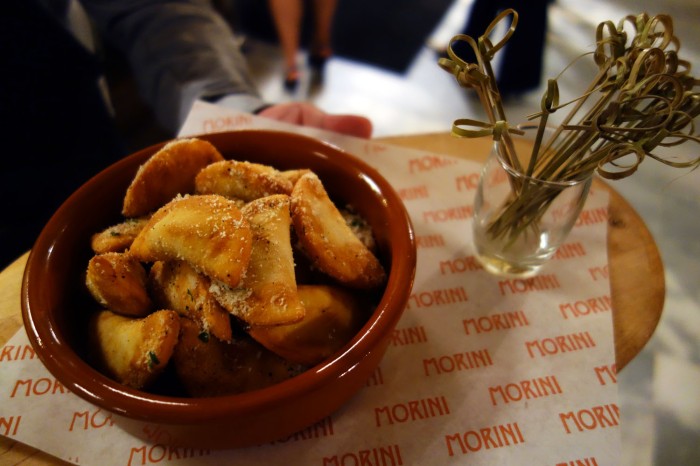 Another seemingly popular treat were the Fried Bolognese, which came in empanada form. The dough was flaky and toasted to a nice golden brown with the crumbly bits of Parmesan adding a nice flavor, though there could have been a bit more of the crumbly ground beef stuffed in. Unfortunately I really only tasted the cheesy dough itself. Maybe it was just the batch I tried from… 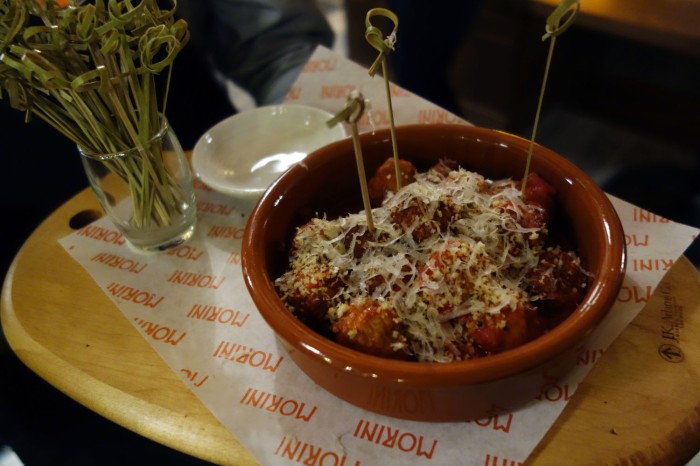 My companion’s favorite dish was the Polpettine. These are Executive Chef Matt Adler’s prosciutto and mortadella meatballs topped with a light basil-tomato pomodoro and some nutty Parmesan shaved over the top. They were pretty addicting and quite difficult to pass on, even after the 4th or 5th tray-ful had circulated. The meatballs were pillowy soft and light as a feather, with a smoky flavor from the prosciutto and a delicate texture from the mortadella. They weren’t drenched with sauce but just touched by it, and the latter was not too acidic to take away from the flavors of the meat. Good quality Parm used, and not sparingly either. 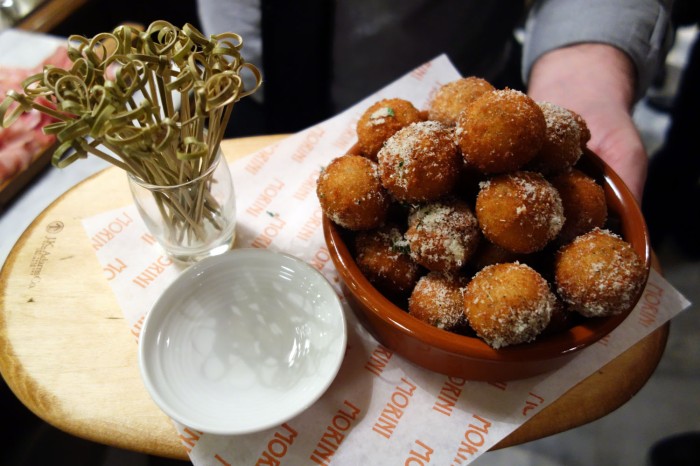 My personal favorite were the miniature Arancini, stuffed with braised short rib and topped with grated Gruyère. The fried little balls of rice had a crunchy, thin breadcrumb coat. After cracking the latter, the warm, moist filling of rice and tender short rib poured forth and coated my mouth in its comforting, well-developed flavors. Nutty, salty Gruyère melted slightly against the heat coming off the exterior and added an extra kick of flavor.

A beef crudo named Manzo came on Parmesan crisps with a bit of smooth, woodsy mushroom crema at the base. These were great. The beef was not seasoned (or, if so, very lightly) and the natural flavors of the meat shined through, accented by the earthy funk of the mushroom. I would have preferred a slightly more sturdy platform, as the thin crisps were a tad brittle and shattered when bitten into, instead of providing a canvas for the beef to shine on. I believe on the actual menu they come on crostini.

Artisanal charcuterie came in the disguise of Testa, a breaded and fried block of pig head terrine topped with a fried quail egg and some Meyer lemon squeezed over. Nobody really knew what the base was until one of the servers actually explained. The announcement deterred a few from trying it, but had the opposite reaction on me. While I think the egg was quite nice with its loose, smooth yolk contrasting well against the grainy breadcrumb coat, I thought the terrine itself was too stiff and robbed of flavor by the preparation. 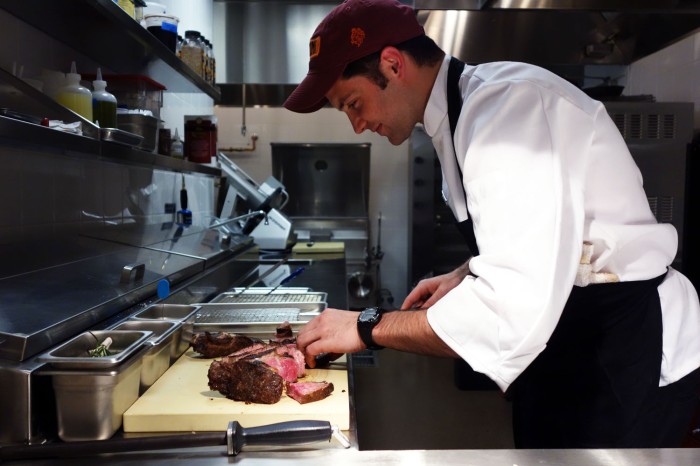 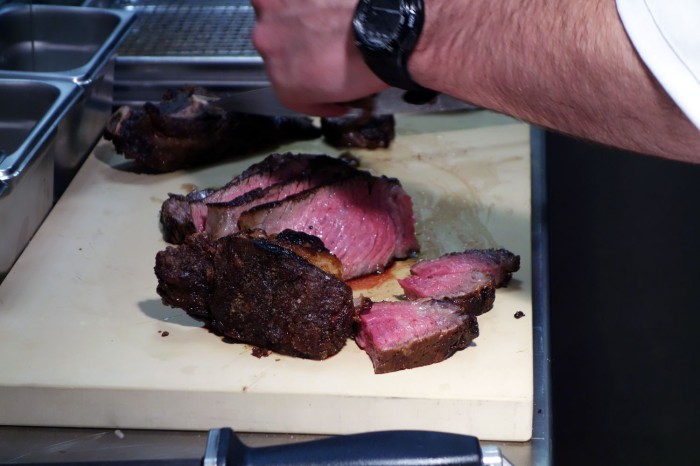 Perhaps the most anticipated dish was the 32 oz bone-in NY strip, dry-aged 40 days before being cooked to order, topped with a wonderful agrodolce and the meat’s own juices. Gloriously tender, bright red in the center, a very slight hint of aging but not too funky for the steak-purist. For the sake of the event, it was chopped up into bite-sized chunks heaped over the bone, which looked pretty cool.

Tasked with providing a sweet ending to the Morini experience, Chef Alex Levin promises a whopping 10 flavors of house-made granite and gelati available to choose from on each given day. We tried the chocolate and the vanilla bean, which both had a fantastically smooth texture, and flavors I would expect from a gelato stand in Rome. Freshly baked chocolate chip cookies were there as well to crumble on. A humble ode to the simple delights of childhood.

A board of more composed dessert dishes, also the creations of Chef Levin, included a sinfully luscious Manjari Mousse Chocolate Cake with dolci cremaux, jiggly sugar-crusted pear jelly candies and a bright green Savarin di Pistaccio. The latter was a pistachio cake with a wonderful pistachio flavored crème fraiche piped on top. On the regular menu, it comes with sorbet and red-wine marinated figs.

Delightful little teasers of what’s to come at Osteria Morini. D.C. foodies rejoice!  Capitol Riverfront is poised to become the newest patch added to the colorful culinary quilt of the city.