Sourdough and sausage stuffing, roasted beets and pearl onions, my mother’s crispy spinakopita defined my most recent visit to Boston. I wasn’t really looking to review new restaurants or to write anything at all, really. I wanted to enjoy food as sustenance and familiar love expressed through flavor instead of searching for words to describe art. But when a friend brought up a plan we had made weeks before, to visit The Kirkland Tap and Trotter, I could hardly refuse.

It’s Tony Maws’ new place, a little brother to Craigie on Main, which continues to be my go-to in Cambridge. When the hype following its opening dies down, it will be a casual eatery for Maws to roam free in once again. Where Craigie has become a bit bougie, attracting a  higher-end clientele than it did in the earlier years of its existence as Craigie Street Bistro, KT and T will be the kind of place where families can relax and have a casual, albeit expertly crafted meal. Highchairs will be tolerated without any eye-rolling and there will not be an unspoken dress-code to make the jean-clad feel awkward. It’s in the name. Tap and trotter. Beer and cheap cuts. The place will allow Maws to once again feed Cambridge with the type of dishes he would prepare for his own family on a slow weekend afternoon. Grilled things, simple flavors, substantial portions. Allowing ingredients to take their time caramelizing, luring flavor slowly out with heat and attention. Plates are topped with canopies of hearty, tannic leaves that are meant to be included in the bite instead of with touches of fragile macro-greens meant to be swiftly dusted off.

And the beverage choice is just as bold as the food menu. Funky, weirdo wines and ballsy craft brews on tap. Straightforward cocktails that do not beg to be overanalyzed. Their gin and tonic is called a KT&T&T and has Amaro Montenegro and house-made tonic. That kind of thing. 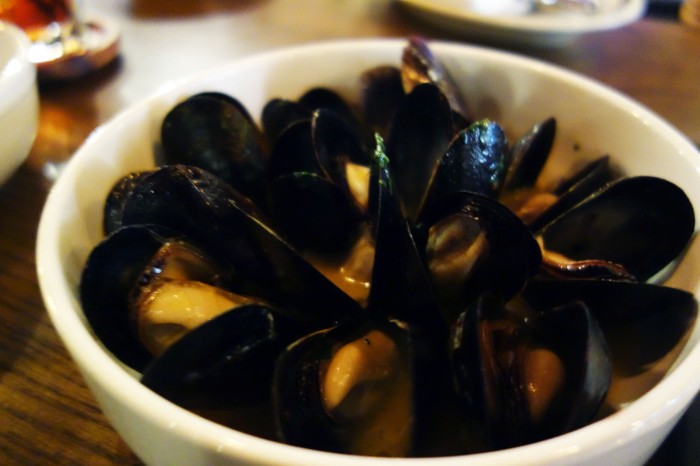 First came the Maine Mussels, plump and round, but unbelievably soft and delicate. They were stewed in a broth of herbs and bits of toasted garlic right at the precipice of bitterness, but still caramelized and sweet. No grainy, teeth-scrapping grit or chewy connective tissue in these mussels. No heavy sauce attempting to mask day-old brine and none of that lumpy, mushy pudding meat inside of the animal. They tasted clean with only a hint of their marine origin and the flesh was pillowy soft, smooth in texture the whole way through. Despite making a point to avoid the bread basket (as part of my post-Thanksgiving efforts to retain my pre-Thanksgiving figure), the broth made it impossible to do so. I tore away at the fresh, hearty slices and dunked chunks into pools that formed as the number of shells in the bowl dwindled. The crunchy crust kept its texture while the fluffy interior soaked up the musky wine, the hint of cream, the zangy garlic and that beautiful, high-maintenance bitch of an herb. I speak, of course, of saffron. The dish was a good one to start with, clean and simple, a well-made classic. And at no point did I feel like a country bumpkin for grabbing shells with my fingers.

It was a wonderful surprise that despite “trotter” being in the name of the restaurant, the menu was not dominated by charcuterie. Because while I love the stuff and appreciate it becoming a trend in country full of organ meat haters, it’s getting old. Of course I enjoy sitting down at a restaurant with “pig” incorporated into the name and being brought out a chef board of head meat with traditional accoutrements. But, honestly, I don’t need it every day, just like I don’t need oysters or uni every day, especially if it is an afterthought of mediocre quality added to the menu just to stay in vogue. At KT&T, it’s not an afterthought. There is only one type, a Housemade Farmhouse Terrine, and it speaks for itself. It has a bite to it but melts readily on the tongue, leaving metallic notes from pork liver and some herbs rounding out the flavor. The terrine sports a bright white coat of silken fat, which also melts from the heat of the mouth and breathes decadence and flavor into the mushy forcemeat. A wine and carmel flavored red onion compote at the base adds crazy little hint of vinegar and sweetness while the pickled mustard seeds and dollop of whole grain mustard add a slightly cleaner acidity and heat to even out the fatty richness of the terrine. 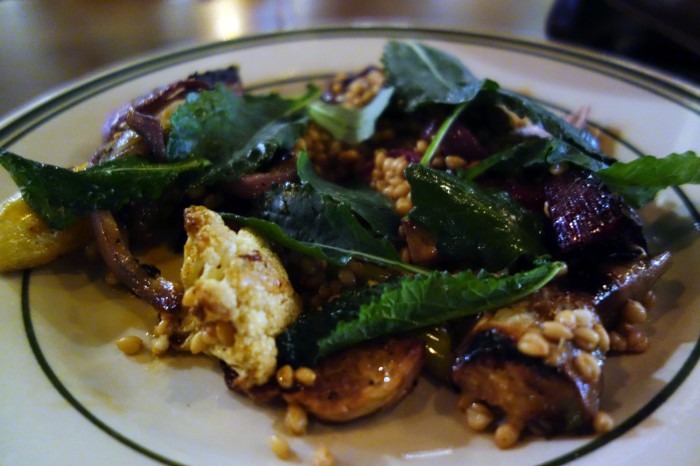 The Grilled Root Vegetable Salad is a playful mess of delicious things, a dish that looks much like one made by a man picking veggies off the grill and throwing them onto a plate before moving onto flipping the meat. No dots of vinaigrette running up the side, no spoon-sweeps of wine reduction or finely chopped micro-chive anywhere on this plate. It’s a heap of onions, cauliflower, Chinese eggplant and beets all cooked to a wonderfully caramelized but still firm point and served cold, sprinkled with chewy farro for textural intrigue. Over the top there is a rough layer of green baby kale leaves adding a dank, musky, earthy note. These leaves contrast wonderfully with the piquant and slightly spicy pimente d’Esplette vinaigrette. The latter is drizzled on, just enough to make the veggies glisten and give them something to offset the smokey char lining their exterior. A great dish for the season and a really nice little gift for those pesky vegetarians out there. For these three the Peter Lauer Sekt Riesling, a fluted sparkling dry Riesling from Saar, NV was the perfect complement. 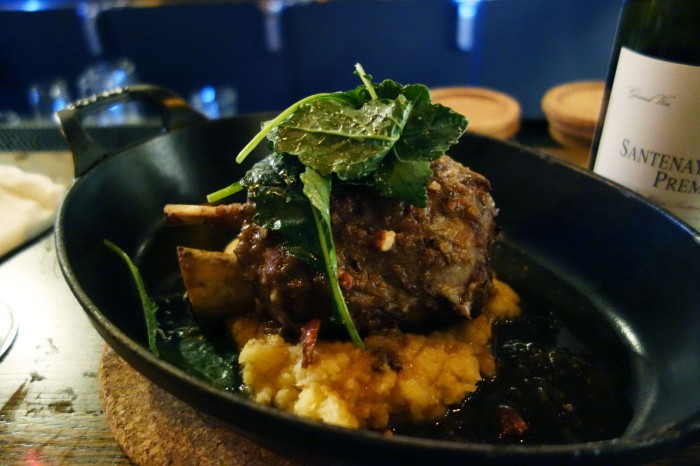 Out came the White Wine Braised Lamb Shank next, a special entree they were featuring that night, to replace the Vadouvan Lab Ribs. With it we had a creamy Burgundy, the 2009 Domaine Roger Belland Santenay 1er Cru Beauregard. The meat had been braised to steamy, juicy perfection and it did not take much to tear it from the bone. It practically trickled off with a touch of my fork. While the meat maintained the lean, moist texture of the lamb, that metal zing unique to the animal had been washed largely away by the white wine. The meat had a cleaner flavor than I’ve ever experienced in lamb, with the wine and herbs providing a good depth but the murky taste only very faintly noticeable in the background. This was quite nice, actually, because the meat did not overpower the very delicate sweet root flavors of the celeriac puree as it might have, had it been left saturated with that gamey animal quality. The mash reminded me of a wonderful cream of celeriac soup (topped with crunchy croutons) that my grandmother used to make and my mother now makes occasionally. Perfect for the season, a great meal to share and take time in so doing. Wonderful even as leftovers eaten only 3 hours later in one’s kitchen… 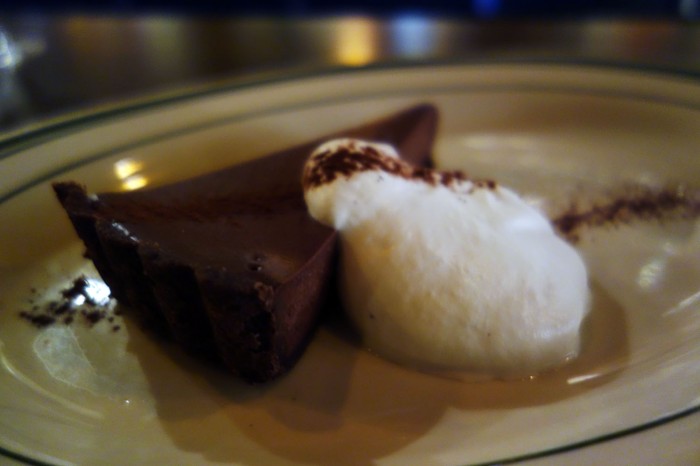 For dessert, there was an ominously dark Taza Chocolate Tarte, which we paired with some Green Chartreuse. Each bite was thick, dense and bittersweet. The tarte filling was cool and smooth like buttery ganache and the bitter notes running through it made the tongue beg for the fluffy Bourbon whipped cream to smooth things out and hydrate the bite. The crust was very thin and allowed the deep chocolate cream to shine through. I thought the kitchen did a splendid job at coercing the unique flavors of Taza (local to Somerville) and ditching the rough grainy texture that results from the beans being stone ground. There was a dark, bitter depth and that almost savory flavor of cacao in there, sure, but these were followed by that weirdly winey, citric and overall fruity note that characterizes the brand as well. Cleverly local and absolutely delicious.

We had a great meal and lots of good things to drink with it. It was at the bar, as is almost always my preference. The food somehow fit to our conversation instead of the other way around. It’s what I had hoped would happen.

One thought on “Damn Good, Homey Things at The Kirkland Tap and Trotter”