It seemed to me unapproachable at first glance, as the hype following its opening did not die down for months – a good sign, but a fact which left me weighing a 45-minute wait against just going to Estadio down the street on multiple occasions. Eventually I went to Barcelona Restaurant & Wine Bar for drinks and bar-side snacks and then to a dinner with friends. The food was genuinely good and despite being as jaded about tapas as I am about cupcakes, I had some spot-hitting dishes that drew me back. Both that time and the next I felt like my table was taken care of by 3 or more people, each well-versed in a specific segment of my meal – the meats, the dishes, the wine. I was recommended a good little Albariño, and later a great Tempranillo. In between I had a Pinot Noir from Patagonia, for which I needed no recommendation.

At one point some particularly sexy piggy gams were rolled out table-side to my neighbors and I overheard a word that made me smile a kind of smile I only smile on such occasions. Mangalica. “It’s from… Hungary, I’m gonna say?” That curly sheep-fleeced, ugly bastard of a breed raised in the Great Plain of my homeland and brought to Spain to process and cure. I hope against all odds that they never become extinct. 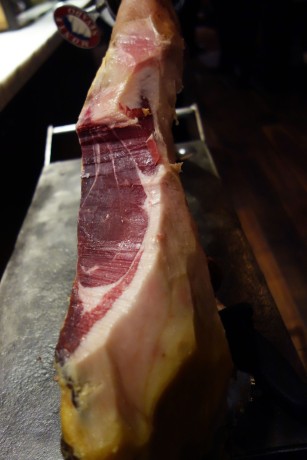 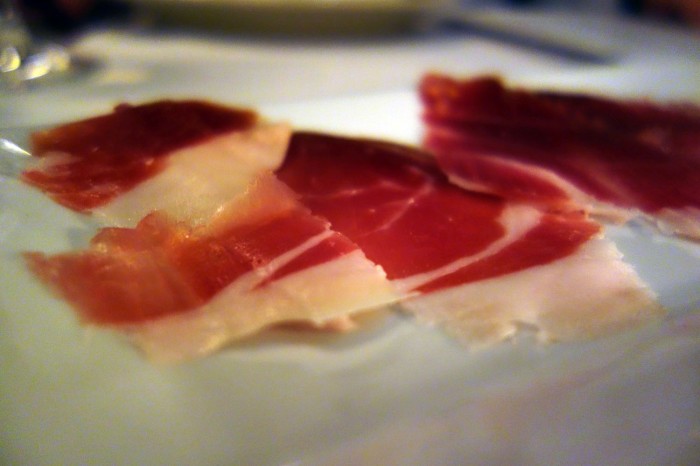 It was aged 3 years in Spain, this leg. The fat saturating its volume contributed to a slow aging, a gradual release and buildup of flavors, which made every slice worth 5 slices of Ibérico. Nutty, earthy, funky and old with a clean, pearly white layer of fat that left the mouth dry for wine and another slice. 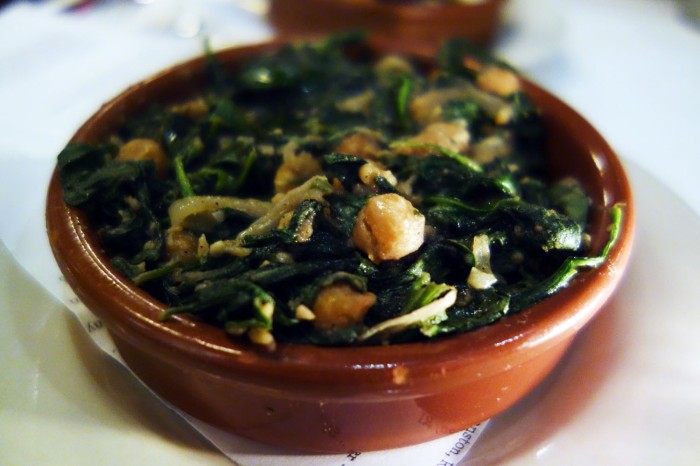 I asked my roommate before I headed out which dish had been her favorite and there was no hesitation in her response. She’s vegetarian and when there’s a dish that she herself does not prepare that sticks out and stays with her, it’s worth noting. Such is the Spinach-Chickpea Cazuela at Barcelona. An oven-licked little earthenware bowl of slippery smooth spinach, a few languid strands of onion and some tight chickpeas cooked to a good firm bite. The textures calm the palate, while the flavors shake it awake. Musky, gamey cumin and sweet roasted garlic reach a good harmony and contribute a fantastic depth that makes this dish a must-order. 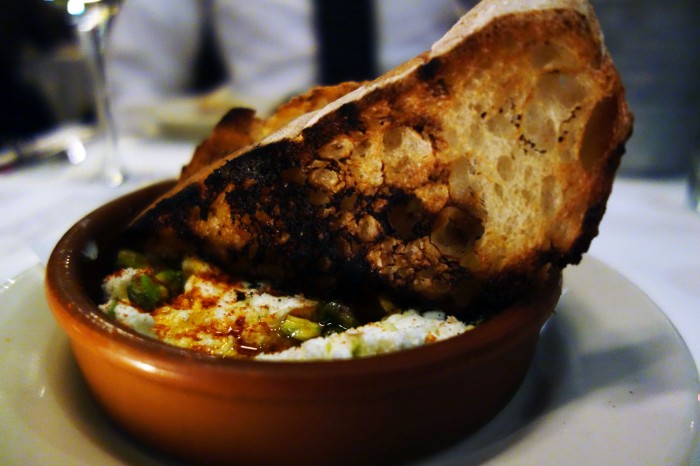 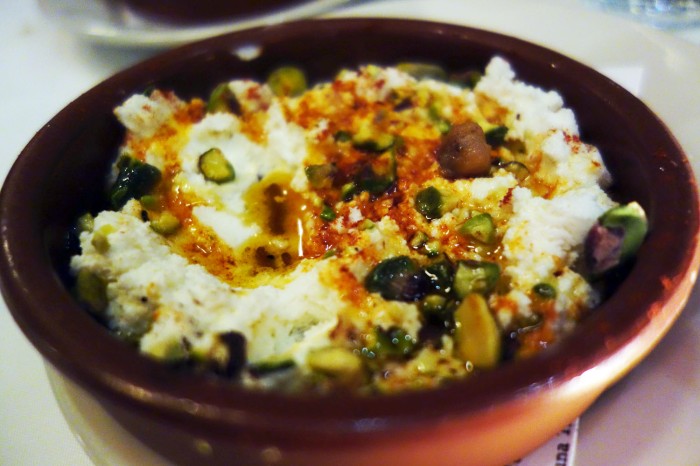 Another great veggie dish is the Whipped Sheep’s Milk Cheese topped off with toasted pistachios, a drizzle of olive oil and a sprinkle of paprika. Smoky Spanish pimentón – sure – not Hungarian paprika, but I appreciated the dramatic color at least. This is a simpler dish and a good alternative to a board of firm cheeses which are far out-shined by the charcut anyway. It is tangy and warm, melting readily over the hearty slices of toast stuck in. The pistachios add a crunch and a sweetness that the smoke from the pimentón balances nicely. For those who like this kind of spread lumpy (e.g., me) it’s easy to just spoon the cheese on. Mixing the oil in makes for a smoother layer for those who prefer it that way.

I totally meant to order bacalhau, but what came out was Boquerones and I wasn’t too disappointed  with the way things turned out. Another simple dish, this one with cool little anchovies pickled in something that reminded me of the brine herring gets, but with garlic rather than white onion and some parsley tossed in. They reached a good texture, not completely loose but instead maintaining their firm little anatomy, plump belly and all.

There was also a board of Chorizo de Soria, a relatively lean sausage made with large chunks of pork winding through the cross section. It was flavored with garlic kept raw enough to contribute a tangy heat and pimentón, with its smoke and mild heat contributing most of the flavor. A board of it was cool but, with my upbringing, I’d rather have this for breakfast on a slice of bread smeared generously with butter with a side of spring onions and salted tomato wedges. Like a nice kolbászos szendvics made with Gyulai. Delicious nonetheless. 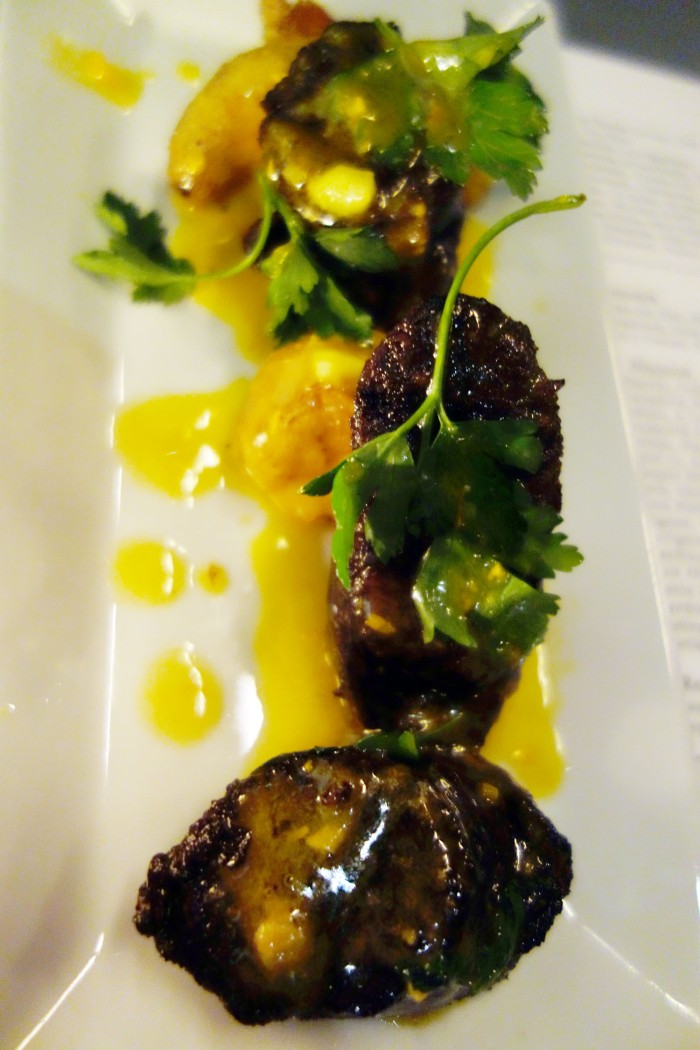 There are two m-words that make my heart flutter – morcilla and mollejas. I’ve given up on finding hunky pieces of thyroidal sweetbread grilled on the parilla and doused in lemon juice anywhere in D.C. I had also given up on the only type of blood sausage I really enjoy – one with more blood and minimal (if any) rice, mushy and funky, kept savory instead of masking the taste of cooked blood with cinnamon or nutmeg or allspice. It’s an ingredient and texture that most American-American men and women cannot stand or allow themselves to enjoy without guilt or anxiety or a fear of actually loving it and subsequently being scorned blood-hungry by even more closed-minded peers. To be clear, I’m not ordering this to be adventurous or interesting or ballsy. I’m ordering it because it’s absolutely delicious and rare to find. Morcilla rocks and century eggs rock and Taco Bell rocks, all in their own way. Your custom-made, overpriced, “shaken” salad does not.

Barcelona’s version of Morcilla is wonderful. Hearty black lumps of it are served with delicate, tight little fingerling potatoes whose skins snap when bitten into. A crunchy crust from the grill complements the mushy, soft interior beautifully and exactly as it should. The barnyard flavors of the sausage are soothed by the acidity and subtle sweetness of a citrus reduction over the top. The latter is of a creamy consistency and is there for the diner to use as much or as little of to clean up the funk. Excusing myself from the table for a few minutes I messaged an old friend in Argentina behind closed doors: “Quick thing. Please stock up on morcilla and mollejas for when I’m there in a few weeks.” The reply appeared before I headed back to the table. “Already done.”

On a bright green bed of leafy arugula came a Grilled Lamb Chop with a side of orange romesco. The chop was smokey with a gorgeous caramelized char, bright red on the inside, and bursting with savory, life-sustaining meat juice with that crazy little twang of minerality so unique to lamb. The romesco pulled those deep yet basic flavors into a sweet, nutty direction in addition to contributing a very feint vegetal heat to bolster the cracked pepper on the char.

My experiences at Barcelona, be it with bosom-buddies or lickspittle, have been memorable for the food, wine and service around those. The simpler dishes shine in not over-loading with ingredients and the more complex ones are thought out carefully enough to seem simple. Wine feels right here and the list, while Spain-centric, remains varied and exciting. I’m looking forward to lazy summer afternoons spent lounging on padded outdoor couches next to a chiller with a frosty neck of rosado peeping out.