I have an ongoing love affair with Stachowski’s Market in Georgetown. The Polish-inspired (though not quite traditional) deli is not as popularly known around town as it should be. Red Apron and Union Smoke House tend to take much of the credit for D.C.’s charcut scene; Stachowski’s remains for foodies and Georgetown residents searching for premium, high quality meats to cook their Sunday dinner with. Their products also occasionally pop up in unexpected places, such as Bayou Bakery’s menu. The latter proudly sources turkey sausage from Stachowski’s, locally.

The place is run by a man named of Jamie Stachowski, with the assistance of his wife and son, Joe. Mr. Stachowski makes his presence noticeable immediately upon entry. He is intense, and loud and seemingly pissed off all the time. Overhearing him growl at employees and delivery drivers makes one blush, as if witnessing a domestic dispute of hosts at a dinner party. I myself got some of it directly when I asked to try the blood sausage I had had there a few months prior. Wrapped up and raw, but not cooked so no, I cannot try any. Got it. Just asking… Joe smiles apologetically and combats the negative energy given off by his father with his own pleasant charm. Be this as it may, the pâtés and sausages and cold cuts more than compensate for the ‘tude. Stachowski’s temper leaves the meats thoroughly unharmed and – honestly – if he needs to be a little bit uptight to create such wonderfully crumbly, mushy, smokey stuff then it is well worth it. 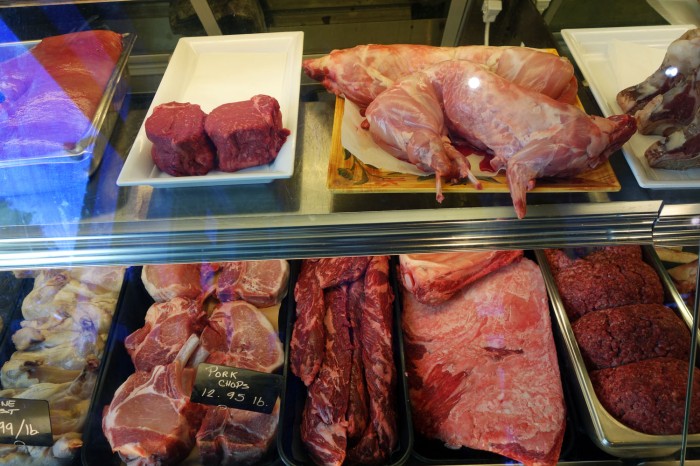 An angelic light illuminates a case full of some of my favorite things: buttery, smooth mortadella (veal as well as pork), pork rillette covered by a snow white layer of lard, chopped chicken livers, a rabbit pâté and chorizos, linguiças, kielbasas in an array of colors and thicknesses. There were also some brilliant butcher’s cuts – beautifully marbled pork chops, tenderloins, racks of lamb, bright red ground beef (ultra-gourmet hamburger meat). There were bonier bits too, some calf’s livers, and some whole (well, headless) rabbits lain out as well. After trying their wonderfully spicy, peppery coppa and crumbly country pâté, my friend and I ordered a Four Meat Grinder and a Fresh Kielbasa, with a side of potato salad. The dude warned about the size of our order, which came out to cost somewhere around $18.00 for the both of us. We got our ticket and sat at the small sunlit table near the window.

The Potato Salad was surprisingly wonderful and memorable in that it had some kind of tingly fizz to the texture which reminded me of the fizz of fermentation I’ve experienced in kimchi… and beer. It might have been a side-affect of all the pickles thrown into the mix, big hearty chunks of tangy cuke, which added a significant crunch factor to each bite as well. There was just enough mayonnaise to grace the large lumps of red bliss potato, cooked to a perfectly tender texture but not overcooked or mushy in the least. Usually I’m not a huge fan of potato salad, but this one left me feeling light as a feather and had enough flavor to justify the mayonnaise. Unexpectedly, it might have actually been my favorite part of the meal, but maybe it was just the fact that it was my first bite of what was a fantastically satisfying lunch. 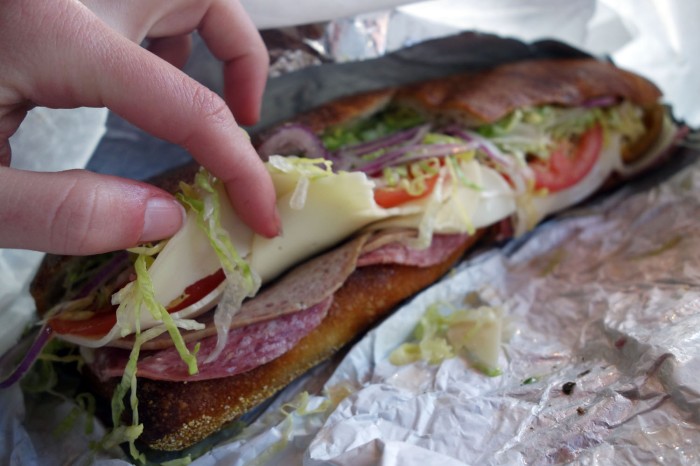 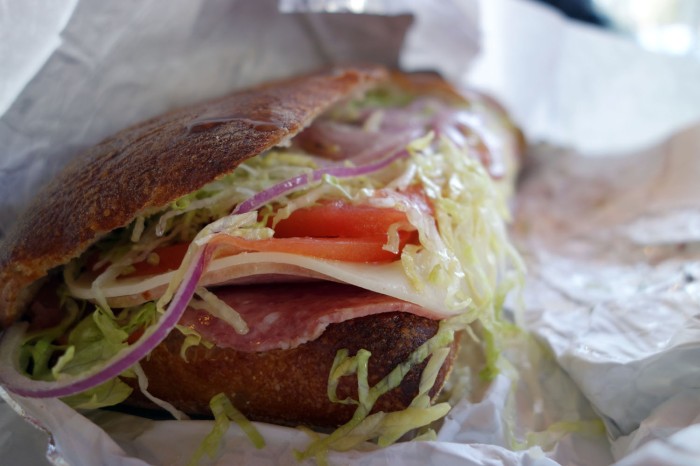 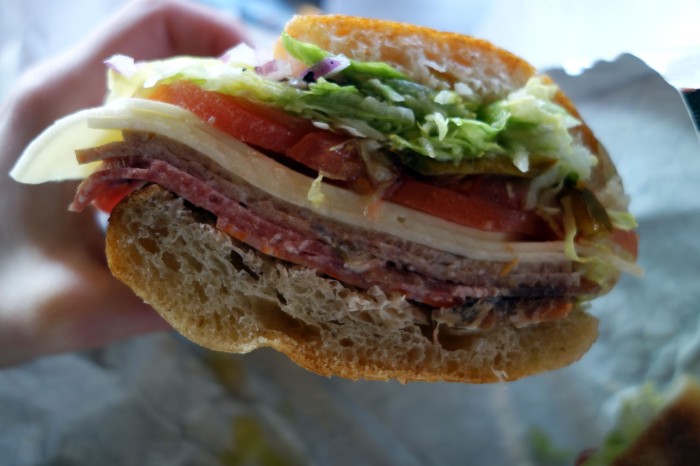 Stachowski’s claim to fame in the sandwich department is their monstrous Four Meat Grinder. A canoe of crunchy, hearty Italian bread stuffed with a foursome of the deli’s house meats: soppressata, salami, coppa and a buttery mortadella. There is also a mild provolone, ribbons of pickled red onion, spicy jalapeño, tomato, lettuce and some oil and vinegar splashed on. The sandwich is a cold one, with the acidity of the onions and the heat from the jalapeño cleaning the mouth of the fatty notes from the cold deli meats. The latter blend very well, with the more cured, salty meats compensating for the milder ones. I appreciated that the cheese was provolone and not anything sharper because it allowed the meats to shine and offered a nice textural canvas for their flavors to be projected on. 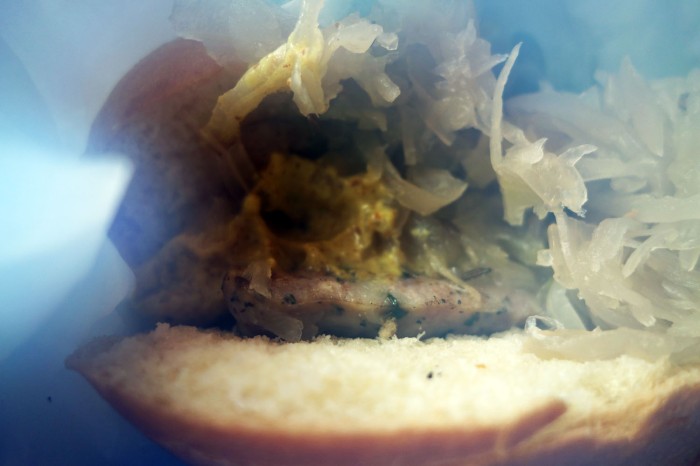 My Polski friend ordered the Fresh Kielbasa, a nice log of their house-made Polish sausage prepared and flavored in the traditional way, no doubt influenced by Stachowski’s Polish roots. It was smeared with tangy mustard and topped with sauerkraut, off which wafted a pleasant wave of steam that made every mouthful feel even more life-sustaining on a cold day. The sauerkraut was actually very mild, bordering on bland. My friend commented that she would have preferred it a bit more pickled and less boiled cabbage-y. I agreed after the first bite, but then changed my mind. The lack of acidity in the sauerkraut allowed the heat of the mustard to dominate, while still providing a wonderful shredded, vegetal texture to the sandwich. The mustard really was all the flavor necessary to complement the sweetness of the kielbasa, while extra acidity from a more sauer sauerkraut might have overpowered the latter. They did their sausage justice by allowing it to be the protagonist.

While I waited for our sandwiches, I also glanced around the place and saw some things that made my gourmande heart race: bins of duck fat, jars of pickled things, homestyle jams and some of the most rustic, crumbly cookies I’ve seen in a while. Sodas I’ve never heard of in glass bottles. Mr. Stachowski’s rants aside, this is definitely a place to spend some time admiring the good stuff you didn’t order as well as the stuff you did. A highly recommended stop in a neighborhood I don’t normally approach for its food.