America del Sur hostel in Calafate has a pretty phenomenal view of Lake Argentino. On mornings before glacier treks or mountain hikes, I would sit gazing through the lofty floor-to-ceiling windows that exposed a beautiful natural landscape within arm’s reach. Carbo-loading on complimentary hostel breakfast and plotting my expeditions on a trail map, I would struggle to concentrate against the distraction of the view. On a late February evening the sun sets at around 8:30pm, casting a myriad of hues over the canvas of the sky. This image was enough for me to never want to leave that common room, that comfy arm chair where I got some of my best writing done while gradually forgetting the closet skeleton I had left behind in D.C. I feel lucky to have had the chance to file such a beautiful sight away into my memory.

I wanted to spend my last night in Calafate with that view of lake and sky. Unfortunately, the folks at my hostel were not firing up the communal parrilla that night (as they had the night before), so sizzlin’ morcillas and cuts of steak in the dining room were out of the question. I asked around for an alternative and was recommended Don Pinchon, which happened to be a 2 minute walk uphill from my hostel and was blessed with the same wonderful vista. I knew I would have to dish out extra for dining in front of a sunset, but spending the most money on the last night of a trip is a tradition handed down to me by my own father and one that I inadvertently but consistently follow.

I called ahead and made a reservation for 9:30pm (normal dinner hour in Argentina) for myself +1 book, which kept me company throughout my meal. Don Pinchon is set at the top of a hill, overlooking the lake. The dining room is rustic, tavern-chic, a bit dressy by Calafate standards but not intimidating in the least. Seats directly adjacent to the window were already reserved by blushing couples holding hands across white linen, bread basket pushed aside. I asked for a 4-top close to a window and the host was very accommodating in splitting the thing into 2 tables of 2 and seating me at the better one. They were patient with me as I sipped my water (not wine) and nibbled on my 1 appetizer, reading my book for an hour as the restaurant got busy. Even knowing that they were making about 1/4th of the profit from my table than any other 2-seater, they treated me well and I never felt rushed. An awkward band did come through to play songs about Don Pinchon, its menu and its employees before rather pathetically demanding both an applause and purchase of their C.D. from the audience. That was a little bit odd, but I guess it added comic relief.

I peroused the menu, noting the lamb asado and the trout, and continued on to some of the more funky stuff in the appetizer section. I stopped at “Mollejas de Cordero con Hongos Fueguinos” (Lamb sweetbreads with Patagonian mushrooms). Mollejas of the cow/calf are among my favorite achuras (innard meats) when prepared correctly. I expected the lamb version to measure up to beef ones I’ve had in the past. I’d also never had mollejas with mushrooms and suspected the pairing would be very successful. The dish cost a whopping $100 pesos ($12 USD,) which is crazy expensive for an appetizer. But I ordered them anyway and shortly after a huge, steaming plate came before me. The dish was clearly meant for an entire family to consume as an app before their main. I immedietaly knew I wouldn’t be able to finish half of it and that taking the rest to have as leftovers wasn’t an option either (leftover mollejas are impossibly tough to chew). But I wasn’t too hungry anyway and trying something new is always a top priority so I did not regret my order. 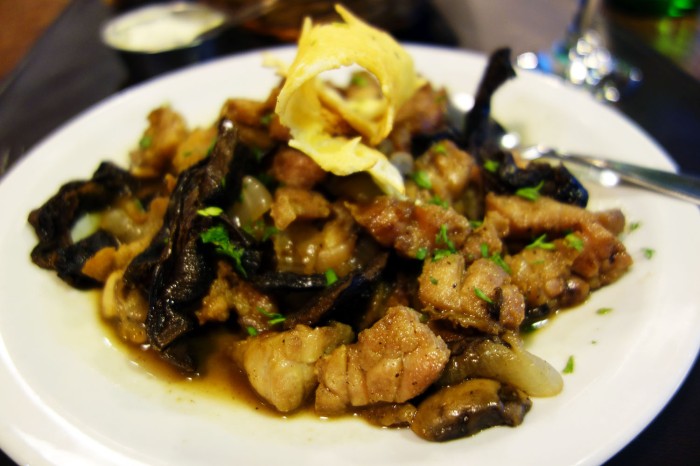 The mollejas were very different from what I had expected. They were gummy and rubbery and fatty all throughout, with no creamy or crunchy bits to make them pleasurable to eat. They also tasted, oddly, like cooked mussels. That similarity bothered me. There was an unmistakable brine that reminded me more of murky, warm, rotting seawater than the characteristic minerality of land animal innards. Nothing, besides seafood, should taste like seafood when cooked. The mushrooms mixed in with the mollejas were great, on the other hand. They were woodsy, dark and funky. I was half expecting to hallucinate after chewing them hard enough to release flavors pent up within. The wine sauce coating the mollejas and mushrooms also had a rich, deep flavor and there was a good amount to sponge up with extra bread. I wish there had been more contrast in the dish – maybe something crunchy or a soft puree to offset the chewy sweetbreads and ‘shrooms, maybe something bright and citrussy to lift up the dank, fungal flavors of both main ingredients. There was a little coil of parmesan crisp but this was more a garnish to be picked off rather than something crunchy to scoop up the wet mollejas with.

I’m happy to have tried the dish, if only to know never to order lamb mollejas again. Patagonia or no Patagonia, I prefer my sweetbreads to come from a cow and this dish just made me appreciate and miss those more. I did get the view I had wanted though, of the blood-red sun setting behind the lake. So I guess for that only, it may have been worth it.