Recently I attended a wonderful event at Zaytinya. Local craft brewery D.C. Brau was invited to pair some of its signature ales to Chef Michael Costa’s Greek-inspired Mediterranean cuisine. For the full story, check out my coverage of the event for The Daily Meal.

Here is a quick slideshow of the delicious treats I tried: 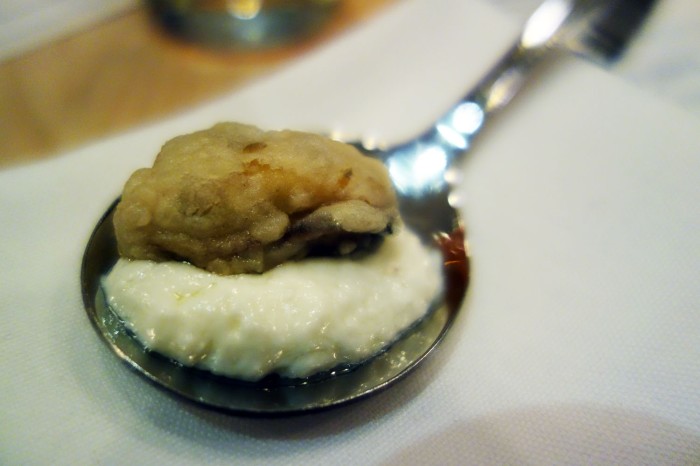 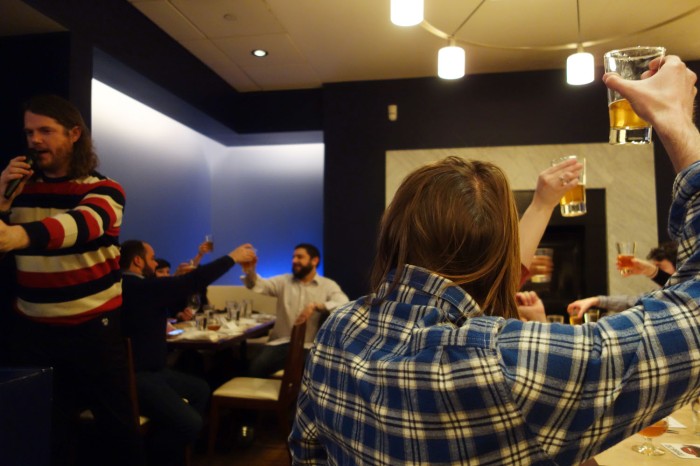 A toast to D.C. Brau’s Brewmaster Jeff Hancock! Also in attendance was D.C. Brau CEO and Co-Founder Brandon Skall (the non-bald guy with the beard in the background).

The first appetizer was a Carpaccio of Salt Cod. Thin but juicy slices of cod on top of a creamy potato skordalia — thick potato purée with plenty of crushed garlic and vinegar. Apparently, the skordalia is a traditional accompaniment to cod in Greek cuisine. There were also cubes of root veggie, notably kohlrabi. The dish was served with The Citizen Belgian Ale. The hop added a spicy note that went great with the dish.

Next came a Papiatopita, phyllo wrapped around braised duck and foie. It was served on braised wild greens (traditionally referred to as horta in Greek cooking), which was seasoned with tons of garlic. This dish needed a beer with a backbone and got it: a glass of DC Brau’s world class Imperial IPA, On the Wings of Armageddon. Intensely hoppy and bitter, this was a very intense beer. 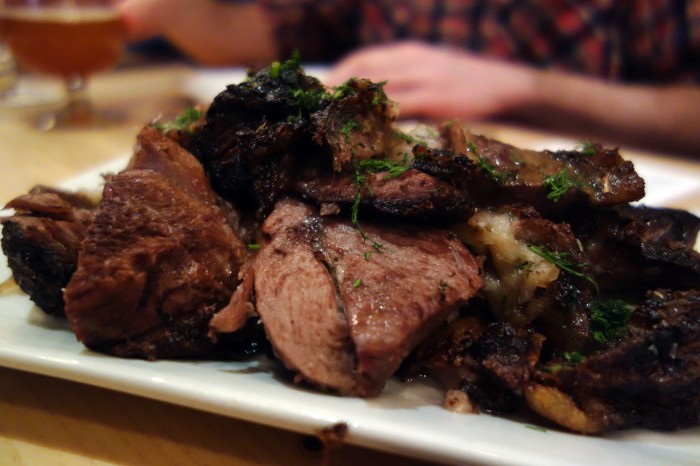 Family style, Spit-roasted lamb shoulder with a mash of La Ratte potatoes and wild mushrooms served on the side. The meat was wonderfully tender. Crisp end-pieces were mixed up with fattier chunks. The lamb was paired with D.C. Brau’s Exaltation Holiday Ale, which had flavors of cherry, cocoa, cinnamon, and black rye malt.

Dessert was a Chocolate baklava with Ikarian honey ice cream, paired with a snifter of Penn Quarter Porter. The harmony here was clear. The beer tasted of cocoa and nuts, both of which were also prominent in the baklava. The sweetness of the honey ice cream balanced the dank flavors of the baklava and the beer.

As I write in my article, “The night was a success, full of good food, good beer and equally good cheer. Here’s to hoping the collaboration will continue.”