A few weeks ago I found myself on a train to New York, with no concrete plans other than to stroll lazily around in the brutal summer heat of the city with my oldest childhood friend and her boyfriend, who were visiting the States for the first time. Fortunately, they had checked off the Empire State Building, Wall Street and the Big Green Chick by the time I got there, leaving quality time for us to do the only thing I have the energy for nowadays in this all-consuming behemoth of a metropolis – to chill, meander and go to a comedy show at the Cellar. I walked with them along the Hudson promenade and took a nap on the grass in Central Park, where we also posed for photos on the boulder. Midday hunger struck us all at the same time – conveniently – in the West Village, and at first we did what overwhelmed tourists who haven’t done much research do: we hesitated at every place we passed, each of us refusing to be the decision maker for the rest of the group. It was “Pease porridge hot; Pease porridge cold” the whole way down 7th. I wanted oysters but my friends hate them raw. They wanted street cart hot dogs but I wanted to sit with a beer. Too cheap, too expensive, too bougie, too hipster.

But then we came upon a place that drew all three of us toward it like some kind of silent, universally awesome magnet. We didn’t point at it or inquire “What about this place?” We just kind of walked in and sat down. The place – Numero 28 – is simple, and not “too” anything. The patio gushes out to the sidewalk, with an elevated section adjacent to a kitchen that faces the street as well. A wood fire burning beauty glares out of that kitchen to the street, orange flames locking in bold eye contact with passersby as if to say, “I’m caramelizing stuff, melting stuff, making stuff crispy. You know you want this.” There are tables with chatty Villagers noshing on salumi e formaggi, sipping frosty glasses of white, totally absorbed in the bella vita. There are also tables with quieter, hungrier folks working away at more substantial fare. Every few minutes the wooden paddle hits the counter with a familiar bang and hopeful heads turn to identify the pizza as their order. And in the midst of it all Nonna Eugenia emerges, smiling modestly at guests and touching her employees by the upper arm the way only nonnas can do. She’s short but her presence beams over the place as if she were 7′ tall. The place is a mini-chain with four locations, but as long as this lady checks in regularly the food will be real and the vibe will be as it would be for any guest in her house in Naples. Her presence keeps everyone going, fear of her disappointment secures quality.

We breezed through the menu effortlessly and ordered within minutes of arriving. 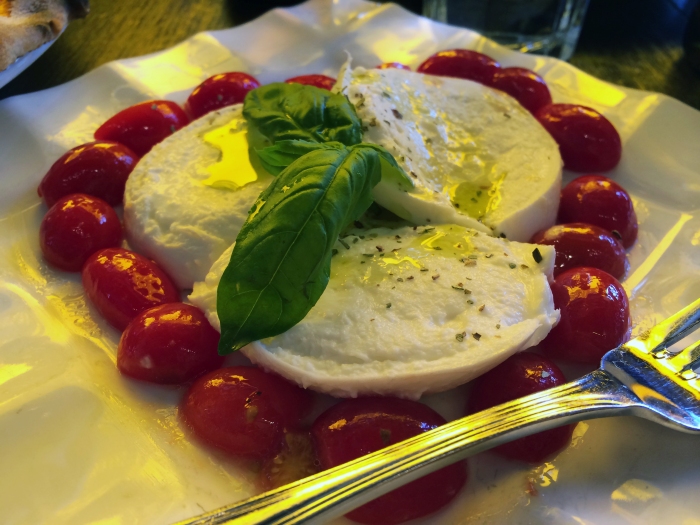 A Caprese, to start, on a hot summer day. Thick slices of cool, milky white mozzarella with plump grape tomatoes neatly arranged around it. The gummy, chewy bite of clean dairy flavor accented by beads of acidity. Two bright green leaves of basil, unscratched and unbruised, lain over the top. Some dry basil more for show than for taste and some pre-pubescent green olive oil with its sprouting, vegetal flavor drizzled on. Best with a glass of cold white wine, though not bad with an ultra light Peroni either. Simple and real and good.

A bubbly, char-patched crust snapped and crackled as I bit into it. I normally never start at the outer rind of a slice of pizza. I pick it up (sorry, Europe!) by the crust, supporting the center with two fingers underneath if necessary, and approach the thing from the tip of the triangle. I like meeting the toppings first, enjoying the sauce-licked, thinner, glossier part of the crust before reaching the foot of the crunchy outer rim. But in the case of the Numero 28’s Neapolitan style creation, it was all about that crust, flour dusted and as asymmetrical as a scattering of hills across plain landscape. Beautiful. We got the D.O.C., which came with a thin layer of tomato sauce, blown up and bleeding cadavers of cherry tomato, snow white globs of di bufala and some fresh basil lain over. The layer of sauce is thin and so is its consistency. It does not coagulate into bunches here and there but stretches out and seems to breathe out steam evenly across the surface of the pie. It’s not oversalted, overpeppered or over-garlicked and retains its very subtle vegetal sweetness. This is in turn picked up by the cherry tomatoes which are likewise caramelized into sweetness but still have a mild acidic edge. Coming across the patches of mozzarella, slightly melted into angelically soft and smooth droplets of sweet cream is a treat each time and the kitchen is surprisingly generous with the stuff.

Nonna Eugenia has a pasta named after her on the menu. It’s a rigatoni bathed in a light tomato sauce, shaved parmesan and plenty of polpettine, marble sized meatballs that fit nicely between the tubes of pasta. I wasn’t too enthusiastic about this when it first hit the table. Generally a bit jaded by Italian food in the States, I saw thick, chewy looking pasta covered in red sauce, which I expected would be heavy, chunky and over-seasoned. It was clear from my friend’s expression that he was thinking the same. But his face transformed, overcome with surprise and melting into silent recognition and content. Having watched the change I couldn’t help but reach over for my own forkful and what I got was extraordinary. Perhaps the reason I shy away from pasta (besides my limited tolerance of carbohydrates) is that it is a dish where the sentiments of the cook come straight through and it is painfully obvious when he or she does not care. Not the case with nonna’s rigatoni. The pasta had a perfect bite to it, not tough or loose, but firm and tender. The word “ethereal” echoed loudly through my mind as the first puffy cloud of veal and pork polpettine unrolled itself and melted on my tongue. The meatballs were seasoned very lightly and retained all the subtlety of ground veal without being overpowered with garlic or pepper. Succulent and very light, they reminded me of the carefully hand-rolled liver dumplings floated over traditional Hungarian hen soup. The tomato sauce sticking, though not aggressively so, to the grooves of pasta was similar to the one brushed over our pizza. Mild and slightly sweet, complemented nicely by the nutty parmesan.

We sat back, satisfied but not stuffed, wanting only for a short nap (and I for the dry hiss of a slowly burning cigarette). Three nostalgic European expats in New York far away from our Hungarian grandmothers, we savored familiar love at Numero 28.