On the last day of our road trip in Slovenia my two sisters-in-law took off to Lipica, Sežana to visit the breeding ground of the famous Lipizza show-horse and ride a bit as well. The Lipizza stud was originally developed during the reign of Hapsburg Maria Theresa of Austria. These horses are fancy and white and as regal-looking as they must have been 400 years ago. They step over the mud as if scared of getting dirty and do weird little jumps that are largely unnecessary but for show. My brothers and I met up with their wives after they rode and took a seat at the cafe of the Maestoso Hotel. We ordered a few coffees and sandwiches, along with a Kremna rezina big enough to feed all six of us. 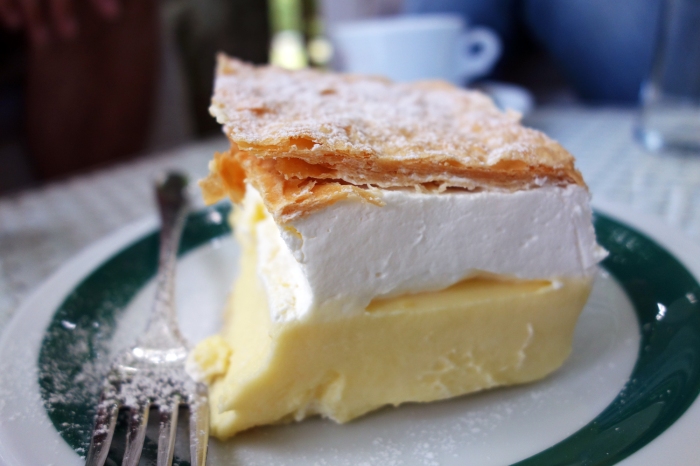 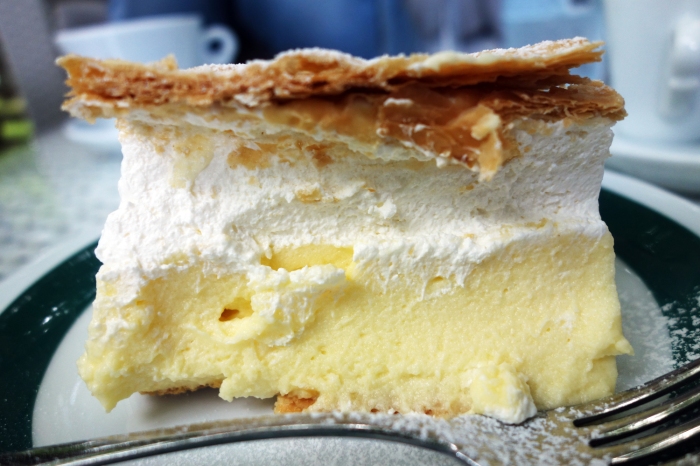 Kremna rezina is a Monarchy era (by which Hapsburg Era is understood) pastry that consists of a thin puff pastry base topped with a jiggly thick layer of vanilla custard and a thinner layer of stiff whipped cream. A powdered sugar dusted, thin puff pastry sheet lines the top. In Hungarian it is known as krémes and comes in a plain variety along with one containing a layer of sweet quark cheese. It’s also well known in Austria and Slovakia. To me its a bit odd, though, that this cremeschnitte made it as far south as Croatia and Slovenia and that it became so popular there. It’s one of the only classic Monarchy era pastries I saw in Slovenia, or at least the only one I could still recognize as originally northern. The creamy, thick custard and puff pastry base have very little to do with other Balkan pastries which are more Arabic in style and descent.

Kremna rezina is not my personal favorite, as there is too little textural contrast – everything is just kind of soft and creamy. The custard is also a bit too sweet and bland for my palate. But, somehow, devouring this Monarchy era pastry while watching spotless white Monarchy era show-horses prance and neigh daintily made sense. And with a shot of bitter espresso it actually wasn’t too sweet at all. 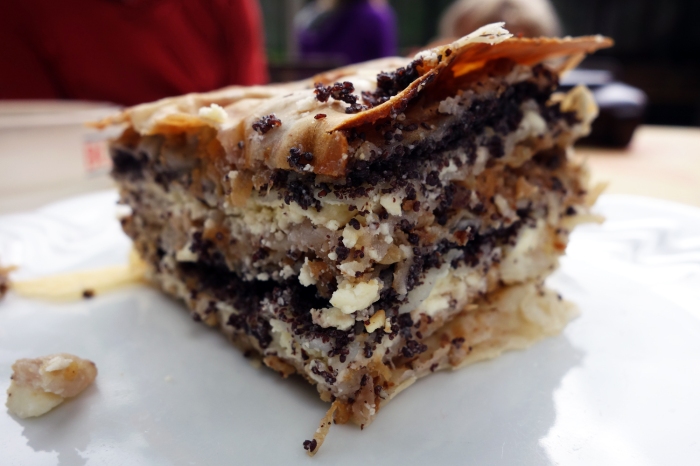 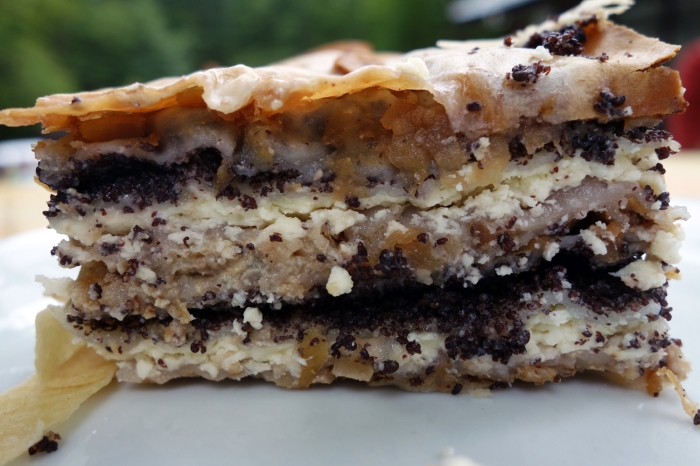 A must-try dessert in Slovenia is Prekmurska gibanica, widely considered a national specialty. It is a layered cake with alternating stratae of sweet quark cheese, poppy seed filling, ground walnuts mixed with cinnamon and grated apple. There are some golden raisins here and there too, along with a crispy or creamy layer of dough over the top. As my sister-in-law aptly pointed out, it’s quite similar to a Hungarian Jewish pastry called flódni, except that the latter leaves out the quark.

I had one at Savica Restaurant at the foot of Slap Savica, a gorgeous waterfall near Lake Bohinj in the Julian Alps. My brother insisted we buy one, and then another as soon as he saw a tray of the stuff sitting on the counter. It must have stirred some pretty awesome memories of his time studying abroad in Ljubljana. A waitress assured us it was made fresh in house and it certainly looked it, so nobody in the group resisted the idea, least of all my 2 year old niece who nearly finished one of the roughly 3” by 3” by 1” blocks of gibanica by herself.

The pastry is wonderful when prepared fresh. The layers mash together and their flavors harmonize, with the sweetness of the walnut and poppy balancing the slightly sour cheese and tart apple. There’s also a good amount of textural contrast to keep each bite interesting. The quark firms up into a somewhat stiff base, which crumbles only when chewed and dominates in texture and flavor. Sliding against this base are the slivers of grated apple and the mass of poppy seeds, which rub the tongue like beads of fine caviar. The only qualm I had with this Prekmurska gibanica is that the top was neither soft nor crispy, but seemed a bit crispy-gone-soggy instead. A nice sheet of crunchy phyllo would’ve been the perfect cap to this dessert. Either way, it definitely hit the spot on a chilly afternoon in the mountains.