“No, you need to reserve before.” My heart sank. “You need to call ahead to book the tours. We work all day.”

I had dragged my family up a mountain range on a winding path amidst a series of summer showers that practically blinded my sister-in-law as she drove. Two years ago in Hong Kong I had tried a wine that I fell head–over-heels for and it was Slovenian. It was Movia’s Lunar Rebulla. Finding myself in Slovenia, it quickly became high priority to go to the source. I set about planning a trip to the winery as soon as we arrived in Portorož and, with the help of our waiter at a restaurant in Piran, we mapped out our route and took off. But I had neglected to call ahead and, what’s worse, I had convinced everyone that it would be unnecessary to do so. The woman at the winery was justifiably grumpy when we pulled up at her door, a party of 6+child. But after some delicate coercion and a few seductive smiles from my 2 year old niece, she complied. She told us to come back in two hours for a tasting and recommended a spot nearby for lunch.

And so it was that we came to a town on top of the hill, where incredible views of leafy green Goriska Brda lent themselves to our admiring eyes. Rolling hills, neat rows of healthy vines packed tightly onto each slant of the landscape. After a bit of light rain the air smelled fresh and the view was crispy clear; everything seemed greener and bluer and whiter than usual. On the main street of Dobrovo there is a restaurant overlooking all of this, Belica Restaurant of the Belica winery and estate. The restaurant is located on the first floor of a beautiful hotel whose bright white hallways are visible from the terrace. We sat on the outdoor patio, covered over the top with a canopy of vines that stretch down poles and dangle loosely into view, rounding out the already gorgeous vista. The amuse–bouche came quickly to welcome us: slices of fresh bread smeared with a spread of quark cheese flavored with herbs and garlic. With it came the wine list contaianing mostly wines from Belica winery, of which I chose a nice crisp Rebula, the region’s signature varietal. 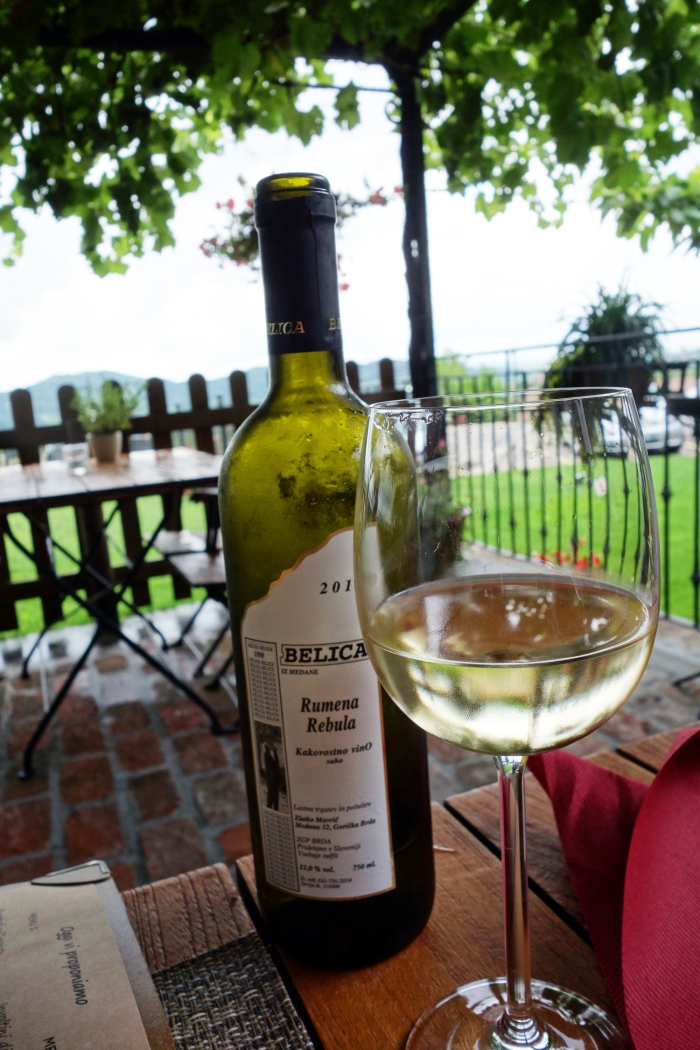 From past experience with Rebula, I was expecting a wine deeper in shade. The 2013 Rumena Rebula was straw blonde and very light. It was still young, crisp, not too complex but tasty nevertheless. The acidity and alcohol went nicely with our food and too much wasn’t lost by combining it with the flavors in our dishes.  I would have to wait until after lunch for the deep and ruddy, nutty splendor of my Movia Lunar. I didn’t mind something simpler for lunch.

A ginormous portion of cured meats and cheeses came next. Breseola, prosciutto and pancetta brought over from nearby Italy were arranged neatly on a wooden board with some hard cheeses made on the estate. The collective favorite seemed to be the ribbons of pancetta, with its gorgeous streaks of meat marbled into bright white fat that melted on the tongue. House bread was brought but left aside for the most part. The savory meats were ripped and rolled and eaten directly off the board. 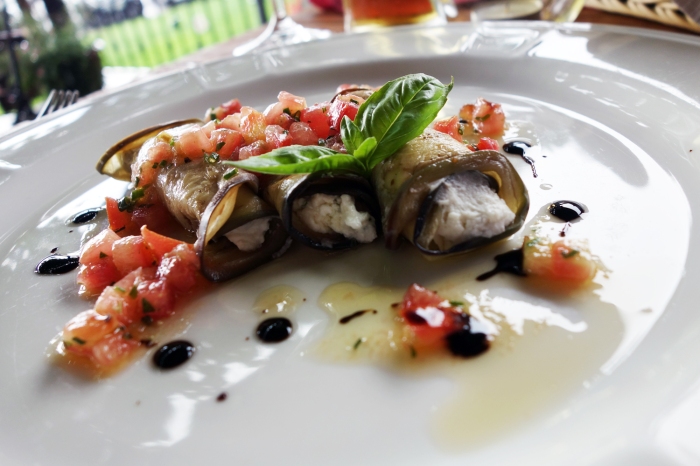 What follows is in no particular sequence. The timing of our courses was completely out of whack, resulting from the restaurant’s policy of allowing both a la carte and set menu for the same table. After the meats and cheeses we all kind of bid adieu to each other and went our separate ways. My brother ordered the veal. I ordered the 4-course Set Menu 2. My sister-in-law ordered deer and her mom ordered Menu 1. Luckily we’re a family that shares ‘n’ cares, so I got to try a bit of everything. Menu 2 started with rolls of thinly sliced roasted eggplant with a fluffy ricotta filling, topped with a salsa of marinated tomatoes and drizzled with the estate’s own olive oil and balsamic. It was a healthy, colorful dish with bright flavors. The eggplant was a tiny bit dry and tough to slice through, making it difficult to cut into a roll without the ricotta shooting out. Nevertheless, a good start and a dish that went perfectly with my first few sips of Rebula. 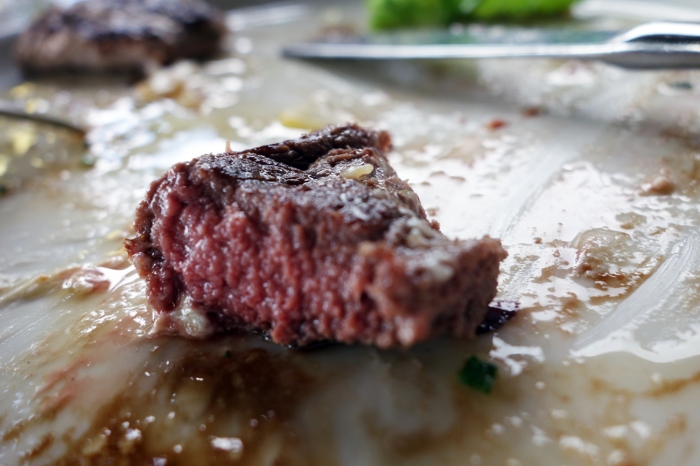 While the eggplant rolls didn’t particularly wow anyone, the venison was a show-stopper worthy of praise. The meat was beautifully lean, but with marbling that made the flesh break down and melt after only a bite or two. The very little fat had worked its way into the muscle and spread itself thin – the tasty, sweet fat of a wild thing that gallops and roams free. The deer had a rich flavor, though not one I would call gamey, and a great crispy cap of char and caramelized flesh. The meats at Belica all had in common that they were licked with the estate’s own wonderful olive oil, which imparted a very clean flavor and even more essence of terroir to the locally caught, wild deer.

My brother ordered the veal steaks, which were likewise very lean but juicy nonetheless. They were a tad more well-done but still pillow-soft and very easy to chew. Seasoning was minimal – salt and cracked black pepper. It really didn’t need anything else. Meat dishes at Belica didn’t come with sides and I don’t remember our waiter having suggested any. The portion is pretty generous though, so maybe that’s for the best.

Also part of Menu 2 was a creamy stew of barley with bright red bits of pepper and plenty of fresh goat cheese both cooked into and shaved over the top. The little beads of grain had great texture. They were slightly chewy and firm, with the creamy cheese pulling the pieces together into a comforting mass, like tapioca pudding. The contrast between salty, sharp cheese and toasty, earthy barley kept the dish interesting despite it’s homogenous texture. 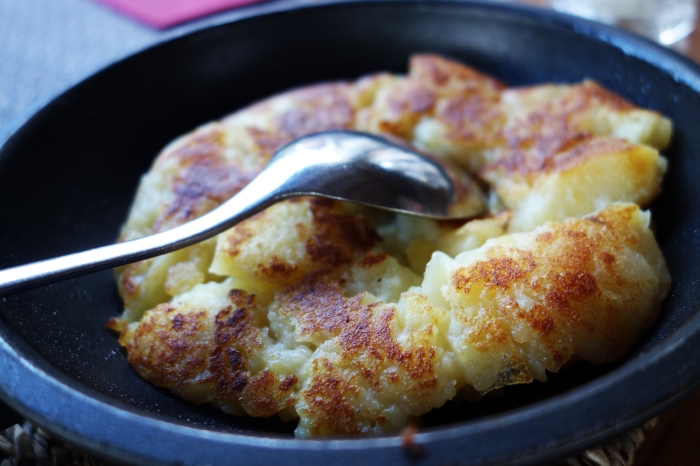 There was also a gratin of potato, which had been ground down to a chunky, loose puree and then toasted in a cast iron pan to achieve a gorgeous caramelized crust. We ended up sharing this as a communal side dish for all the different types of meat, and it worked out well. Scooping out a spoonful was a pleasure for the senses – the crack of the crunchy crust followed by the creamy, soft mash inside. And again the clean, green flavor of the olive oil used to pan–fry the thing was very much present and appreciated by all.

Menu 2 had a slightly smaller portion of veal on a bed of greens referred to on the menu as a “salad.” I could’ve used a slice of tomato or two. The smaller bits of veal were just as juicy and tender as the larger steaks, even later that night when we ate them, chopped into bits with a side of bread.

As it turned out, we had not gauged the timing of the meal properly. We had arrived with only an hour and a half to spare and by the time we ordered entrees it was down to 45 minutes. Belica is a restaurant that needs more time. It’s a place to slow down and enjoy the company of whoever you’re there with, while dishes are prepared individually, from scratch, to order. By the time the a la carte folks at the table finished their entrees, the set menus were only half on the table and it was time, more or less, to get going. Our server expedited the meal as much as he could. He was very helpful in wrapping up what remained and getting us out of there on time. We arrived to Movia just 15 minutes late, with a car full of delicious leftovers to take back to our hotel. And although I would’ve preferred to finish the meal on that scenic terrace in a more leisurely fashion, the ultra-tender veal certainly hit the spot as a rather gourmet beer–side snack during the World Cup semifinals, which we watched back at the hotel.

That day spent in Slovenia’s wine country turned out pretty damn close to perfect, by my definition of that word. Our meal at Belica was a wonderful part of that experience.