I don’t like traveling alone. I like being on planes alone, trains alone, sure; it’s when I digest what I’ve just experienced or prepare for what awaits me. But I’ve gotten lazy with planning my own route and paranoid of falling into the tourist traps that I know I’ll regret later on. Plus, drinking a beer alone sucks. Bourdain once said, “The more you travel, the less you realize you know.” In my experience the more I travel, the more I realize how much I need a local to show me around, a fixer who knows what to do and what to avoid doing to fully experience the place without wasting any time. When that person is someone you know and trust, it’s ideal. But sometimes that doesn’t happen and the challenge becomes making friends (the right kind of friends) in a limited amount of time. There are some things that make this easier to do: open-mindedness and humility, enough self-confidence to admit to needing help, honesty to admit to being alone. And couchsurfing.

A few weeks ago I stopped in Vienna for a day and a night en route to Alicante, Spain. I have an Austrian friend who would’ve been the perfect guide and whom I was dying to see anyway but, as fate would have it, I arrived to the city on the day before she left to celebrate her birthday abroad with friends. Using couchsurfing as a back up I found a Peruvian DJ who has been a Vienna resident for 6 years. He agreed to put me up and to put up with me for a day and a night. Before the official tour of the Monarchy Era stuff he took me to 7 Stern Bräu, a restaurant built around a craft brewery located inside of a yellow and white house on Siebensterngasse. It’s near the Museum Quarter.

The menu is old-fashioned Austrian fare. The dishes are quite familiar, as many of them find their counterpart in Hungarian cuisine. The beer list is extensive and interesting; the proximity of the brewery itself – across the counter – is comforting. Both my newfound buddy and the server were patient with me as I, one pint in, got to playing the game of “over-articulate the German word” while perusing a menu. But after a few “AUFFFF” and “EIIIIINS”‘s it got old, and we ordered.

We shared a Wiener Schnitzel (vom Schweinnnnn) because you really can’t not share a Wiener Schnitzel if you’re in Vienna for just one day. The appetizer size would have been more than sufficient for an entree. It was good, damn good. It wasn’t a dish particularly foreign to me, as I’ve had the version popular in Hungary under the name bécsi szelet (literally, “Viennes slice”) quite often. I’ve also had the bastardized Argentine version (milanesa), which is often prepared with full-grown beef instead of veal or pork. This one was perfectly made. The pork cutlet was pounded to a good thickness (still hearty but manageable) and fried in a deliciously crispy bread crumb coat. The breading was similar to that which my grandmother used to use for her rántott husi (informally, “breaded meat”). It was just grainy enough, with a wonderfully toasty, nutty flavor that added much to the meat within. It was delightfully crunchy around the edges and delicate near the center. Served with the meat were so-so French fries that I didn’t have too many of. A slice of lemon to squeeze over the meat was the only garnish for this simple dish.

My buddy got the house special, a sizzling hot skillet full of white and green gnocchi mixed up with tender chunks of pork, turkey and chicken. The mound was topped with a mushroom sauce and melted cheese. When I’m starving this is exactly the dish I want. In any other case it’s a bit sloppy. It’s also comfort-food to the core. The plump little dumplings were held together by velvety smooth cheese, which caramelized into a crunchy, golden brown layer on the surface. Poking forth here and there were the various types of meat among which I even found a crumbly chicken liver, bursting with delicious mineral funk. I recommend ordering this dish to share among a group of friends on a cold winter night with pints of beer on the side. 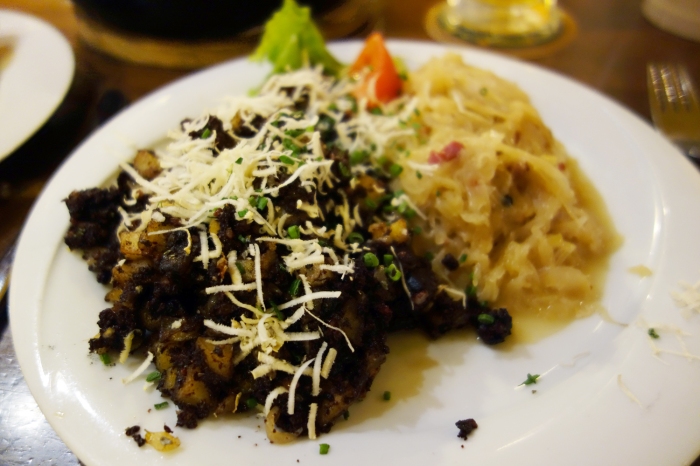 There wasn’t much hesitation on my end, as I leapt headfirst into a gargantuan pile of blood sausage and kraut. The crumbles of sausage (a local variety, called blunzen) were moist and creamy, wrapping around soft bits of diced potato to form a very palatable mash. The flavor was exactly what I had wanted – funky, mineral and slightly sweet, with an autumnal touch from clove added. By its side was a mass of warm sauerkraut. The strands of cabbage were cooked until glassy and smooth. They were absolutely saturated with the tangy brine they had been cooked in. The two went together magically, since the acidity from the sauerkraut lifted up the otherwise quite heavy flavors of the sausage. This was a plate of mushy things with very little textural contrast, but one which I spooned away at eagerly. It also went remarkably well with the hoppy housemade brews arriving continuously to the table.

I only spent around 10 waking hours in Vienna altogether but they were 10 hours of being fully immersed in the local vibe, thanks to my new buddy. I’m grateful to have had someone show me around. Our meal at 7 Stern Bräu was exactly what I wanted that night – homey, substantial and simple food paired with excellent house-brewed bier.