As I start this article I’m on a RENFE train, Basque Country bound. My expectations are high. Pretty much every chef I’ve ever met has either wanted to go to San Sebastian or waxed poetic about the city, having visited often for inspiration. I know already that there are more Michelin stars per square foot there than anywhere else in the world. I also know that the accessible stuff is just as dearly recommended as the four star fare. As I understand, “Basque” is often understood as a fusion of French and Spanish, but the Basque are fiercely proud of their culture, which is totally different from that of Spain or Catalonia or France. The cuisine, I’m sure, mirrors this somehow. There must be something unique about it, something different from the cuisines of its neighbors. I’m going there now to discover what that something is.

A few months ago I got a taste. “It’s Basque,” my uncle said as he described Erroak, the restaurant where my mother’s birthday dinner would be taking place. “Basque,” he said with a significance that hung in the air heavily, echoing there long after he pronounced it. He raised his eyebrows as if to wordlessly add, “…and they know a thing or two about food, wouldn’t you say?” The truth is, I don’t really know. I am completely ignorant of what “Basque” even means. I once had a boyfriend with a Basque last name and I know that their land is somewhat mountainous. But that’s really about it as far as my knowledge goes, for now. 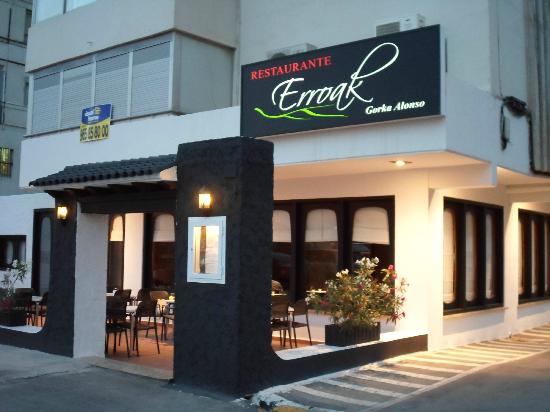 Erroak is a restaurant in Benidorm, a city that doesn’t otherwise have too much going on food-wise. It’s a beach town overrun by gangs of odious British travelers, a promenade lined with nightclubs and strip-clubs and crappy tapas joints with overpriced bullshit designed to trap foreigners. Most of the highest rated restaurants are in the lobbies of hotels and there’s not too much incentive for any serious chef to open a place in town. But at the same time there’s not much competition. And maybe this is why Chef Gorka Alonso chose Benidorm as the place to open his own restaurant with his wife María José after many years of experience working in restaurants in both Benidorm and Bilbao (Basque Country), where he is originally from. 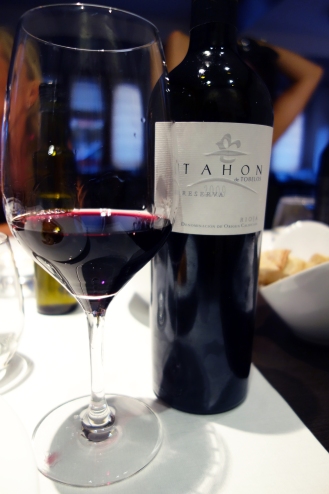 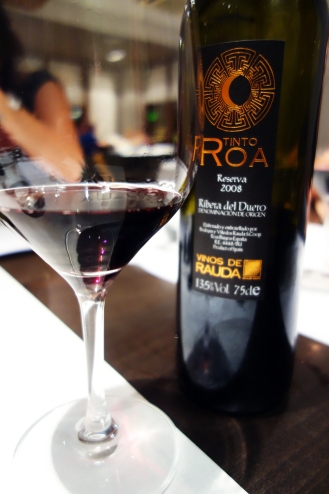 His restaurant is a little box in the middle of the city, unassuming and quite approachable by the looks of it. Inside things are modern and clean, the staff meticulously trained to serve, the service itself as smooth as a baby’s bum. A designated sommelier helps with wine selection, knowing very closely each wine on the 100% Iberian wine list. He taught me, for example, that Tempranillo was called something different in each of Spain’s wine regions. He also helped me choose two wines for the table: a 2009 Tahon de Tobelos from Rioja and a 2008 Tinto Roa from the Ribera del Duero. Both were exquisite.

The menu at Erroak is a fusion of traditional Basque food with stuff tourists like. Bacalau [cod] is all over the menu, but the kitchen stays on the safe side by also offering the popular on-holiday staples, such as a tuna tartare, a foie, a steak and a cheesecake. While the appetizers are creative and allow for more Basque flare, some of the entrees seem a bit Plain Jane. 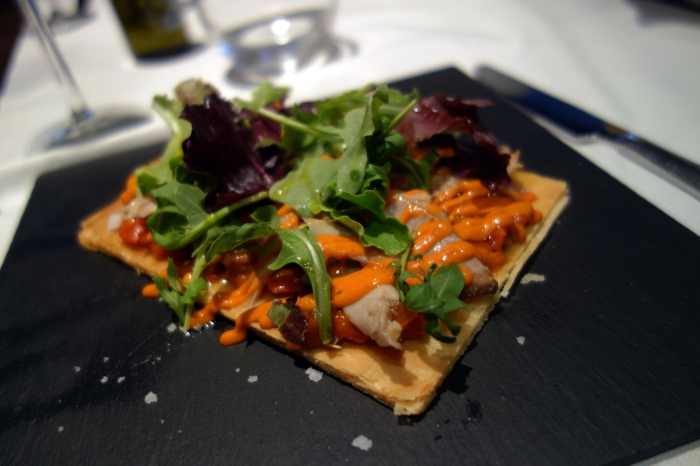 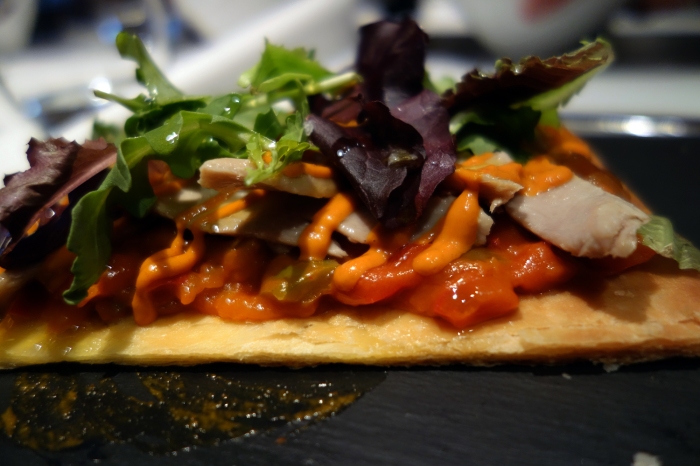 I started with a little flatbread-type thing with a flaky puff pastry base and a hearty topping of ratatouille and white tuna belly. A roasted red pepper sauce was drizzled over the top. As I sliced into the pastry the brittle and buttery crust snapped into shards, offering great textural contrast to the moist, dense stew of veggies. The vegetables were cooked perfectly, each one maintaining its own flavor while also harmonizing with one another perfectly well. The eggplant became slightly smokey and balanced nicely with the more acidic tomato. The creamy and somewhat sweet red pepper sauce held everything together. Fatty little bits of slippery tuna belly appeared here and there, cooked until tender and silky soft. The dish was finished with sea salt, which brought the flavors to the forefront even more. There’s something to be said for a dish that my hypercritical mother claims as her own after trying just one bite… Because that’s exactly what happened. 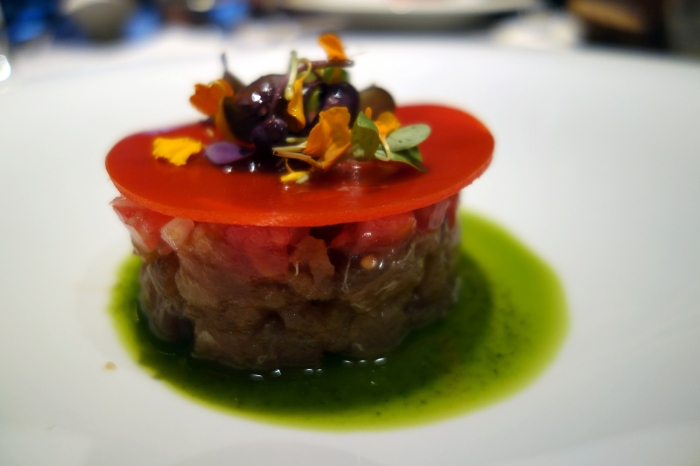 Erroak’s tuna tartar is a pretty little thing. A stout little column of minced tuna held together with juicy bits of tomato and capped with a halo of red pepper jelly, some olives and brightly colored edible flowers. The tuna sits in a pool of leafy-green olive oil loaded with fresh basil. The fish seems fresh, it’s flavors are bright and clean. The tomato adds the right amount of moisture and its delicate sweetness helps balanced the pungent herb oil. Although it was aesthetically a nice touch, I didn’t care for the gelatin. It didn’t have too much flavor and crumbled easily into rubbery bits that were too similar in texture to the tuna. The gelatin ended up diluting the flavor of the fish without adding any sort of contrast. Nevertheless, a beautiful dish; a pleasure to look at and to photograph. 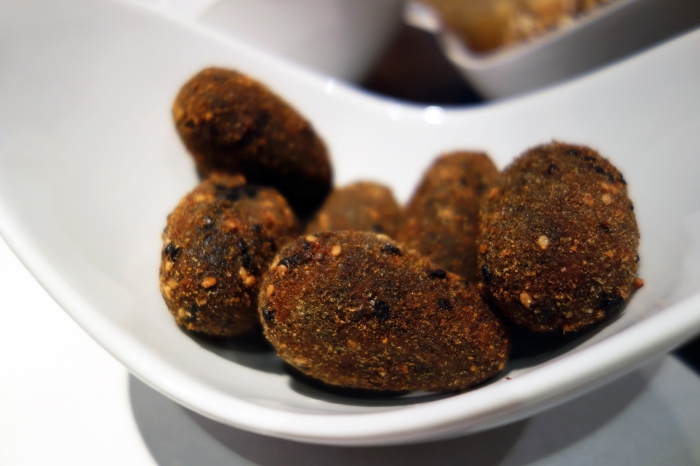 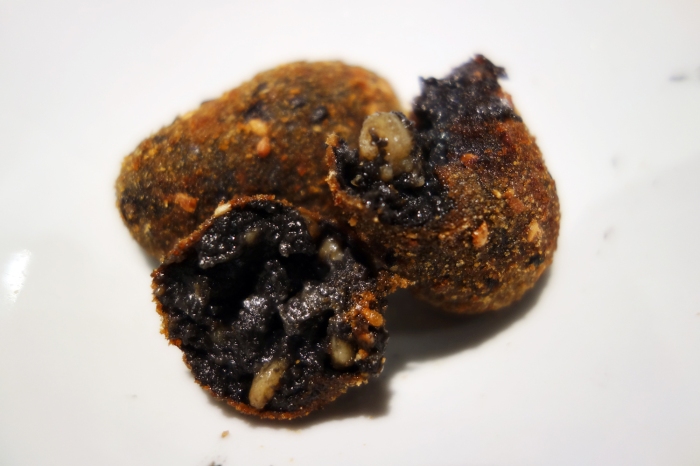 The best dish of the night by far was the bowl of Black Squid Croquettes that we ordered to share but which my uncle and I ate the most of… with our eyes closed, humming. Do I doubt that Basque grandmas whip up this kind of thing for Sunday’s family gatherings? Yes. Do I care? Absolutely not, in this case. The croquettes were nothing short of explosive in flavor. The crunch of a heavenly, golden brown crust yielded a thick pudding of squid ink, which gushed forth and coated the mouth in a viscous glaze of pure squid ink flavor. It had that murky, musky low-tide brine, that barnacle juice funk and subtle sweetness that I love so much. And it was jet black in color. The blood sausage of the sea. Contrasting in flavor, texture and color was the gorgeous bread crumb crust whose grainy, sandy consistency was elevated masterfully with the addition of white and black sesame seeds. The latter caramelized from the heat of the deep-fryer and exuded a toasty, nutty flavor that harmonized maddeningly well with the sweetness and brine of the ink. This dish, though one of the simplest, was the perfect appetizer. It 100% made up for those dishes I didn’t like quite as much. 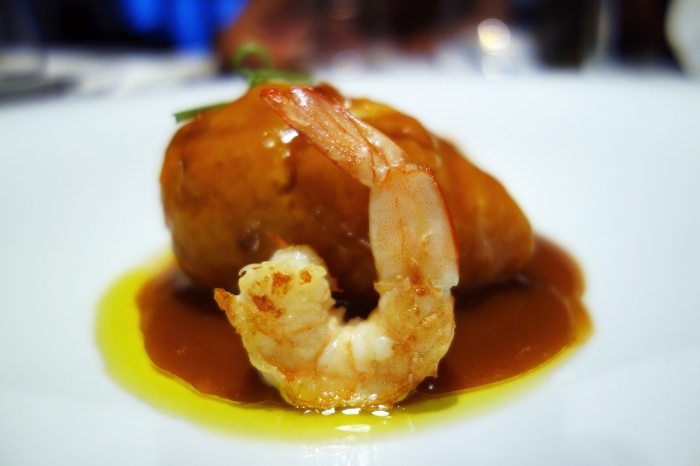 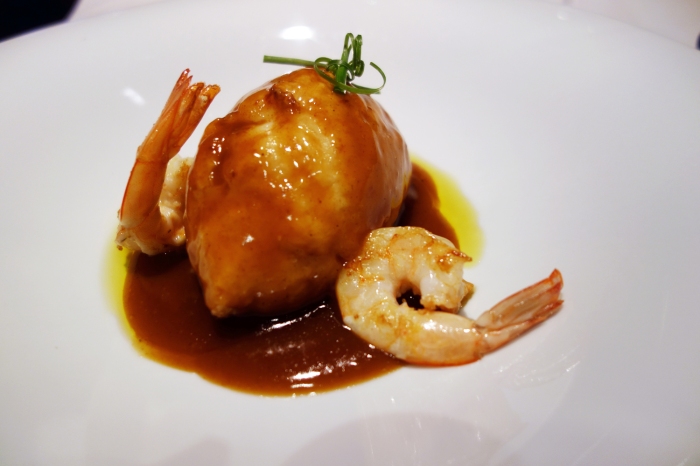 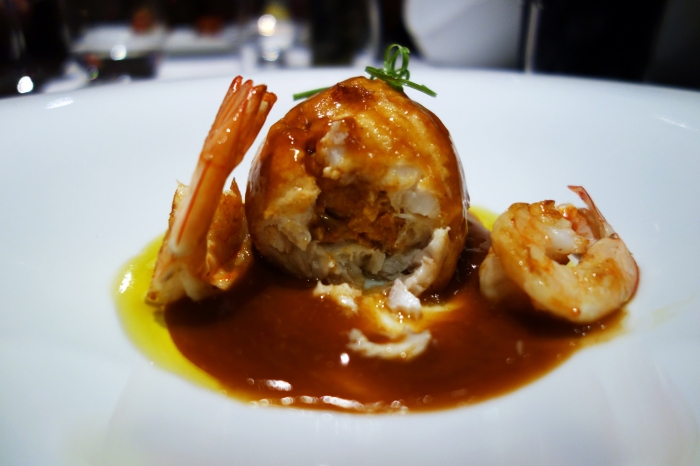 By coincidence I tried what seems to be Erroak’s signature entree, a ball of hake stuffed with crab and veggies in a seafood sauce. It was garnished with sauteed prawns. This was an inventive dish, though not one I would order again. To begin with, I’m not a fan of stuffing things into other things, especially when the texture of the ingredients are sensitive to cooking time, as is the case with fish. I found the hake overcooked and the flavors of the crab mash filling didn’t come through as much as I was expecting it to. A nice and hearty bomb if you’re hungry for a fistful of fish, but in my case this dish made me regret not choosing a meatier entree. 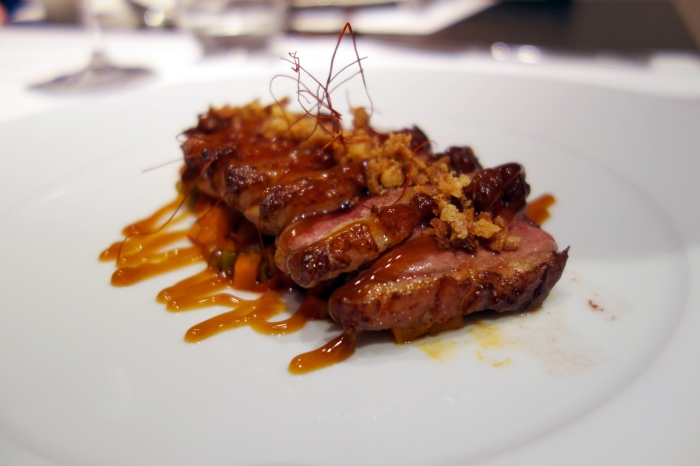 I tried a bit of the duck, though I don’t remember the dish well enough to fully describe it. As I recall the teriyaki sauce squeezed on was a tad too salty, overwhelming the delicate red curry that the slices of breast were rubbed with. The texture, however, was very pleasant. The meat itself was pillow soft and juicy. The skin was also deliciously fatty, though not as crispy as I like it. 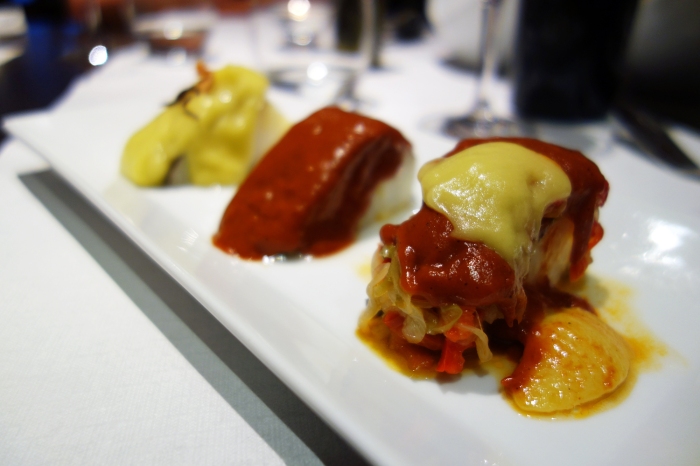 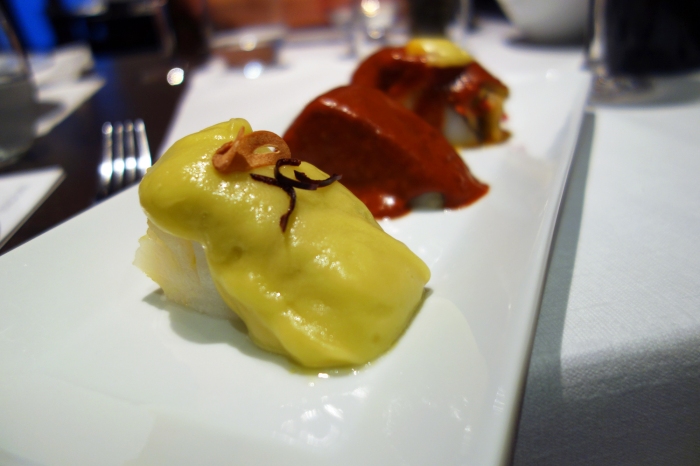 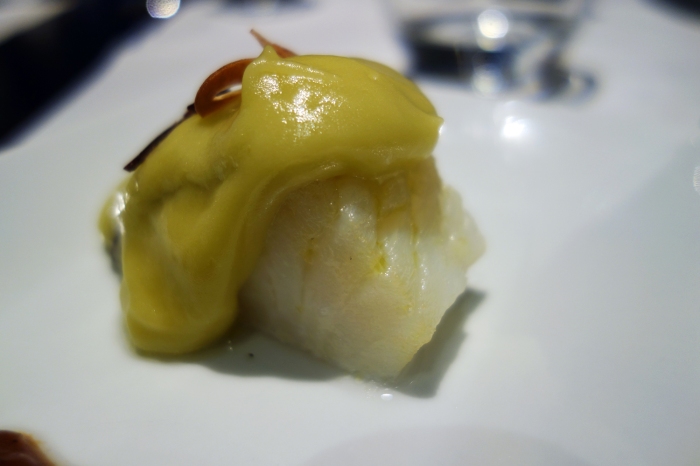 The most traditional Basque dish, from what I could tell, was the Cod Sampler – three pieces of salt cod, each served with a typical sauce. The first was Pil-Pil, a very thick yellow sauce made by whipping up an emulsion from the oil the fish was sauteed in. The sauce maintained some of the flavors of the fish and had a hint of garlic as well, but to me the texture was a tad too heavy and unnaturally gelatinous. There was also maybe too much of it. The Pil-Pil seemed to suffocate the tender, flaky fish underneath. Not my favorite. The Vizcaina sauce suited me better. It was a thick, bright red sauce made with sauteed garlic, onion and pepper with some of the cod’s poaching liquid (along with all that jiggly fish fat) stirred in. The flavors were those of mature, caramelized veggies and fish; the sauce formed a snug little blanket for the cod underneath. The best of the three was the cod with Club Ranero Sauce, which I believe was basically the same as the Vizcaina but with sauteed onions and peppers also lain between sauce and cod. Good textural contrast from the veggies and a gorgeous natural dulzor to round out the flavors. 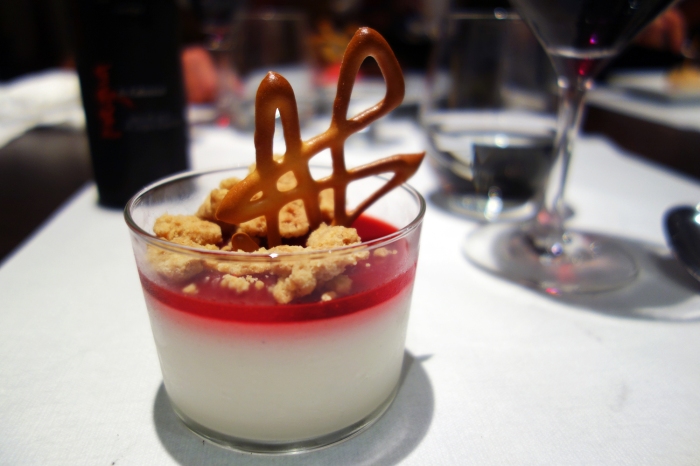 Gorka was once a pastry chef and, as one can tell from tasting his desserts, a very committed one. I tried three; all were fantastic. Curious about the restaurant’s signature cheesecake, I took the leap to order it, against better judgement. I’m very glad I did. The cheese was ethereally light and fluffy, more like a pannacotta in texture than like New York style cheesecake. The frothy whipped cheese was only very slightly sweet, with a clean cream flavor as the base for this sweetness. Over the top was set a thin layer of raspberry gelatin, similar in texture to the pepper jelly of the tartar but with much more flavor to contribute. A crumble of buttery crust over the top added nice crunch. 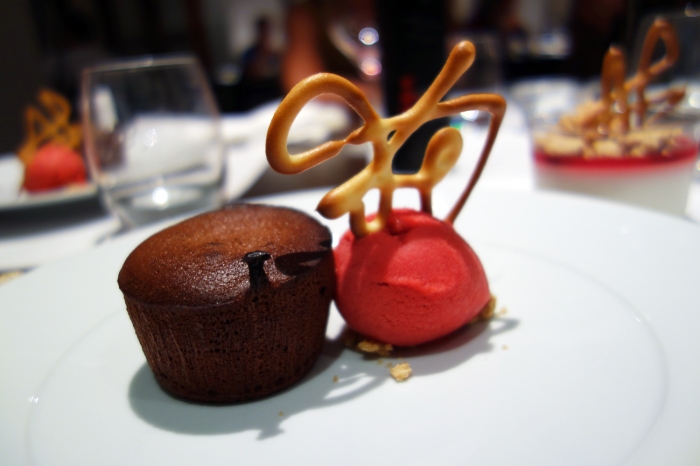 There was also a warm fondant bleeding forth smooth dark chocolate when broken into. It was paired with a brilliantly acidic and refreshing sorbet of raspberry, which balanced the bitterness of the chocolate beautifully. Again, not particularly Basque but a classic very well executed. As is the case with all of Gorka’s desserts, this one was marked with the restaurant’s signature, in the form of a crunchy cookie. 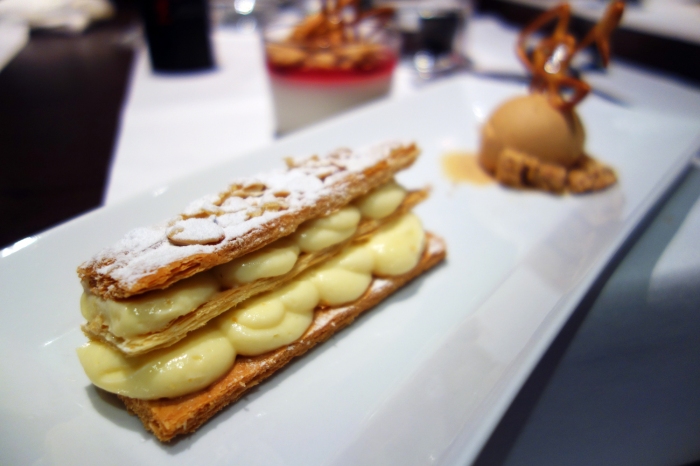 The most traditionally Basque dessert was the Pantxineta, said to have been invented in the beginning of the 20th century at a bakery named Pasteleria Otaegui in San Sebastian. It’s a layered thing – pastry cream between sheets of crunchy puff pastry dough. It’s topped with caramelized almonds and powdered sugar. At Erroak it comes with a small scoop of caramel ice cream. Unfortunately I did not try this one, but it looked wonderful.

Although dinner at Erroak wasn’t exactly the Basque culinary experience I was hoping for, it was a good celebratory meal in a city that is otherwise a culinary desert. Chef Gorka’s dishes are colorful and artfully plated. Their presentation at the table draws a “wow” affect, which lasted through the meal.