And then there was Casa Bartolo, a slightly more legitimate and local looking spot where the bar is lined with plates and the floor below is covered in used napkins. They come around every 10 minutes to sweep it up. It is said by locals that the more napkins there are the better the place is likely to be. When we got there the place had just recently been ransacked by a group of Brits, but the bar recuperated quite quickly and within moments there was again a vast array of pintxos to choose from.

Bartolo was quite different from Alcalde in its selection. In general, there were more fishy things and pickled things, less fried and meaty. Of course they did have some chorizo, fuet and jamón mounted on bread, but for the most part the selection seemed fish and pickle oriented. Basque cider also seemed to be more popular here than beer or txacoli, with the glossy metal tap placed front and center at the bar. When ordered, the cider shoots out. It seems the Basque enjoy pouring liquids from up top the cup and they’re right; this aerates the liquid and helps bring out its flavor. It was at Bartolo that I learned that Basque cider was very much a thing and that if I really wanted to experience it I’d have to go a sagardotegia, a Basque cidery, between January and April. I’d have to yell “txotx!!!” (which means something like “bring out the cidah!!!”) and catch in my cup the stuff spritzing forth from a humongous chestnut wood barrel. When I told the bar guy that I won’t be around in January, he winked suggestively and responded, “You don’t know that yet.” Maybe he’s right. 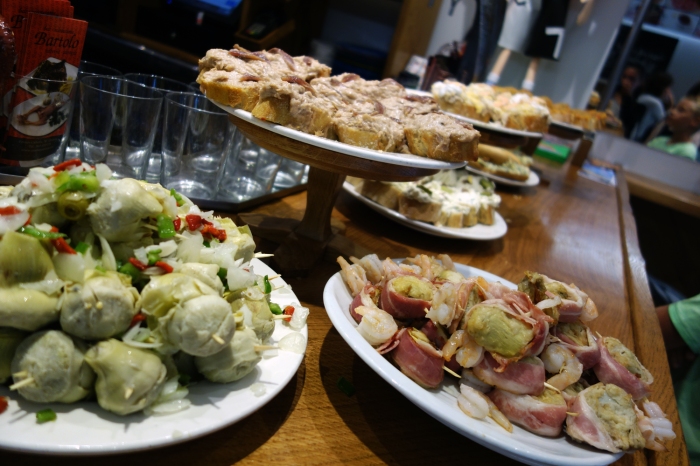 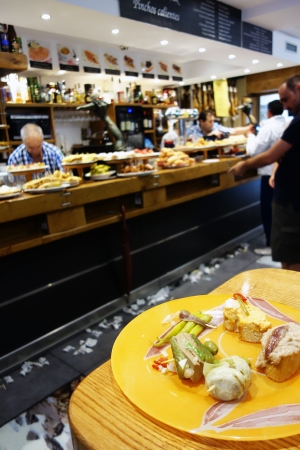 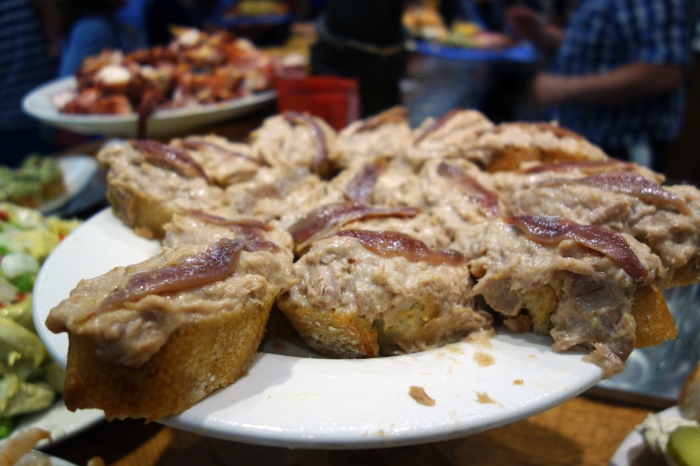 The first thing on my plate was something that seems a house specialty at Bartolo. It’s a savory bonito spread piled high on a piece of bread with a single filet of glossy anchovy lain across it. This was probably one of my favorite pintxos of the bunch. The tuna “salad” was creamy but very light, the fish flavored with some onion. The anchovy provided a piquant finish, adding the perfect concentrated fishy and salty flavor to the otherwise mild tuna beneath. Lesson learned. My next tuna salad sandwich will contain anchovy.

Next up, a red pepper spread made with the kitchen’s own recipe. It’s not quite the mojo picon sauce I’ve seen everywhere else but lighter. It’s also not as deep red as a romesco. I believe that there might have been a fair amount fresh cheese mixed in to give the thing more density and body. It was served with crunchy bread and some perky pickled veggies over the top to contrast with the natural sweetness of the pepper. 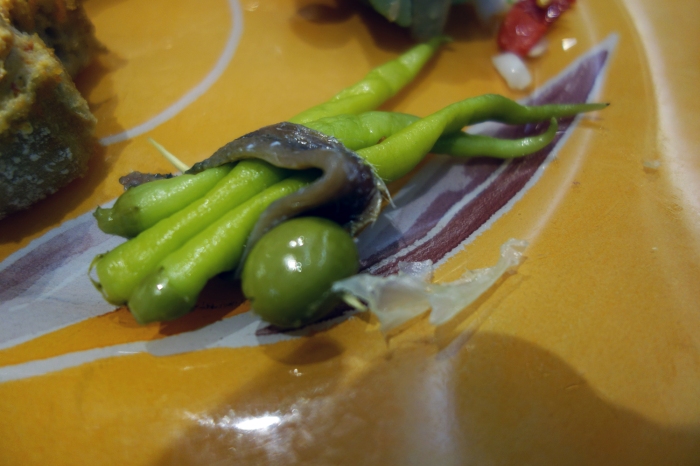 And then there was the emblematic Gilda [pronounced ‘hilda’], pickled guindilla peppers wrapped in a salt-cured anchovy fillet and topped with a pitted manzanilla olive. It’s said to have been the very first pintxo, invented in the 1940’s by a guy just kind of picking at stuff with his toothpick at a bar while daydreaming about Rita Hayworth’s character in the movie Gilda, which was all the rage in those days. At that time men would be sent out by their wives before lunch time to buy wine for the family. They would get that done in a matter of minutes and spend the rest of their time lounging around and drinking beers with their buddies at da bars. These bars started to put out little things for these guys to snack on, maybe so that they wouldn’t return to the house totally hammered. There were little plates of anchovies and olives and pickled peppers, a small container of toothpicks. Eventually some guy connected the dots and the Gilda was born. The combination of these ingredients was “verde, salado, picante” all three of which have sexual connotations in Spanish. As the guys were partly killing time to avoid their pesky wives back at home [this was before the age where angry wives could text “Where the hell are you? You’ve been out for hours!”], they must’ve been talking about Rita Hayworth quite a lot. So when someone, no doubt a bit tipsy, suggested that a skewer of pickled veggies and fish be named after her… Well, it stuck.

And it’s good; it wakes your face up. It’s very salty, very briny, very acidic. And perfect with a beer. It’s no international sex symbol but yeah, it’s alright.

Attacking the pickle station, I had an artichoke heart stuffed with chopped peppers and onions, which I unfortunately didn’t get a very good shot of. Bartolo seems to specialize in pickled artichoke hearts. I saw some wrapped in ham or bacon and others garnished with a variety of other pickled veggies. Additionally I tried the pickled gherkin stuffed with tuna and garnished with minced onion and olives. The pickles were wonderful here, sweet and sour with the perfect snap in texture. I enjoyed the combination of the pickle with the fish, though the texture of the latter was a bit too stiff for me. I would’ve preferred it to flake a bit more.

Two things I wish I had ordered at Bartolo were the mini quiche type pastries with a spider crab meat filling, and the txuleton viejo, which is a grilled T-bone steak and a real house specialty but not really a pintxo. Maybe next time.