One of the most dearly beloved restaurants around these parts is Chef Toni Bru’s Celler de l’Àspic in Falset, the principle village of the Priorat. Born into a family of bakers in the town of Cabacés, Chef Bru dedicated himself to cooking at an early age. The resurgence of the region’s wine production in the ’90s also allowed Bru to enhance his project with one of his earliest childhood interests: the collection, pairing and tasting of wine. Currently Chef Bru is the president of the sommeliers of Tarragona and is actively involved with various forms of wine education. Walking into de l’Àspic is in itself a lesson on the wines of the region; a long ramp lined with bottles behind glass leads from the entrance to the reception desk, which stands between the dining room and the almost equally large wine cellar. It took my dinner companions and I some time to get to the host stand, as we kept stopping to point out the wines we’ve tried and those we were itching to try. When we reached the desk, Chef Bru helped us to our table.

The dining room is well lit, the tables elegantly set, the service graceful and fluid. It’s formal for Falcet, but only just Priorat-chic still. Diners look good and eat quietly, but there’s a sense of homeyness brought about by the presence and accessibility of the Chef who doubles as the one true host of the restaurant. Needless to say, he’s also the sommelier, guiding his guests through the list and helping to choose something they may have never tried before. For us he selected a 2008 Mas d’en Compte from Celler Cal Pla [blend of Garnacha, Carignan and Cab Sauv] and a 100% Garnacha to teach us how this most representative varietal of the Priorat behaves alone vs. in a blend. I enjoyed both very much, though Mas d’en Compte seemed a bit smoother on my palate. 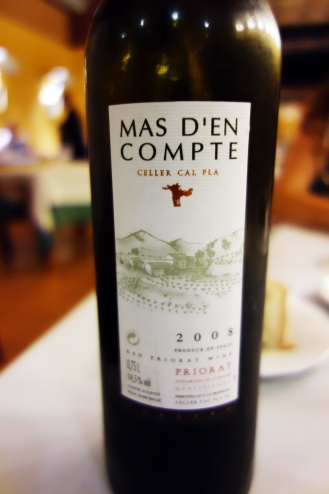 It’s not difficult to figure out Chef Bru’s intention when it comes to his cuisine. Himself a product of the Priorat, he makes it his #1 priority to source locally, to show off the terroir from whence he also sprouted. Bru is an avid and active supporter of the Slow Food Movement, fiercely proud of the ingredients he chooses to use. He has a story to tell about each one. His partnership with the producers of the Priorat and nearby Tarragona seems more important to him than the work of his own kitchen, which in itself is refreshingly minimal. Bru seems a most passionate curator of local products, taking care to only present the best of everything to his guests. The best shellfish, the best herbs, the best meat, the best seasonal veg. All this shows, very much so. Flavors, for the most part, are clean and simple, core ingredients allowed to shine without being blanketed by heavy sauces or seasoning.

We thought it best for the Chef to put together a light meal for us, one that would showcase that which he is so well known for doing. A very nice meal followed.

To prod our appetites, Chef Bru sent out small bowls of mussels simply flavored with garlic and a few drops of olive oil. Even this intro dish reeked the sweet stench of locavore. In the States I’ve grown used to menu titles loaded with the names of producers and their terroirs, but chefie pride in sourcing products is not as striking around these parts. Maybe that’s because when something is locally sourced it’s obvious [and thus unnecessary to mention] and when it’s not [most often seafood] then why mention it at all? The menu at de l’Àspic brands the mussels as Ebre Delta mussels and the garlic as garlic of Belltall. The lumps of crustacean flesh are exquisite. They’re delicate and sweet, steamed with the Tarragona estuary jus from which they were plucked. No wine or broth to hide fishiness, just the salty liquid terroir of the region. The garlic is all de belltall which 1) is fun to pronounce, 2) means that it comes from the village of Belltall in the Conca de Barbera region of Tarragona. The village of Belltall specializes in garlic, with about 12 families producing 7,000 kg of it per year. They’ve been doing so for over 200 years, dry-farming their product and saving the seeds from generation to generation to preserve its unique qualities. The garlic is rich in flavor, toasty and sweet but still mild in itself. It infuses the cooking liquid of the mussels and rounds it out to where it’s deep and robust enough to not need additional seasoning.

One of the stars of Chef Bru’s summer menu is the bright red Benac (Banac, Benach…) tomato grown in the Baix Camp region of the Priorat whose capital Reus is quite close to where I live currently. This variety is known for being intense in flavor and that it is, with a perfect ratio of vegetal sweetness to bright acidity. It’s a satisfying tomato, one that I would eat on its own as a snack on a summer afternoon. It’s also very firm in texture and not too pulpy, which makes it perfect to slice up into a salad, maybe not so perfect to rub onto bread for pa amb tomaquet. The tomato is assembled onto a pile of tender green beans that have a wonderful snap to them still. They’re mild and sweet and brilliantly green. An edible flower garnishes, while a ribbon of salty cured ham adds a savory punch without overshadowing the stars of the show. 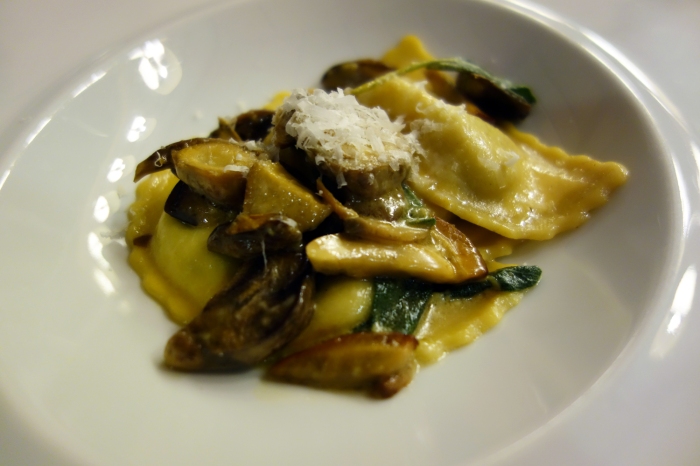 The only dish of the night which didn’t particularly wow me was the ravioli of chanterelle mushrooms wetted with a cheese sauce. The folded edges of ravioli were a bit too chewy and the mushroom filling inside was bland in flavor. The sauteed mushrooms around the pasta were fine, though nothing too spectacular and the cheese sauce could have been a tad more pungent to keep up with the rest of the dish. What was, however, quite memorable about this dish was the sage leaf that burst forth intense woodsy notes as well as mild citric ones when I scraped its surface with my knife. It imparted a wonderful aroma to the entire dish, making it a pleasure to breathe in.

Celler de l’Aspic is not the first place I’ve heard of Sergi the Goatherd or the goats of Capafonts in Baix Camp. I do believe I’ve been eating their fresh mató cheese and yoghurt for some time now. But meat from this herd is not quite so quotidien and it takes serious pull around town to obtain some. Chef Bru can do it though and he seems giddy with excitement when he suggest we order it: a filet of roasted baby goat from Capafonts. The fish alternative is quickly dismissed and the entire table orders kid meat as main. It’s lovely. The supple flesh falls apart into delicate morsels that takes barely any jaw movement to masticate. It’s lean but very moist, the surfaced smoothed by a velvety glaze of red wine and pan jus. A sprig of Montsant rosemary adds a warm, yuletide essence to the summertime meat. Served on the side is a waxy and wonderful new potato along with tender zucchini and onion. 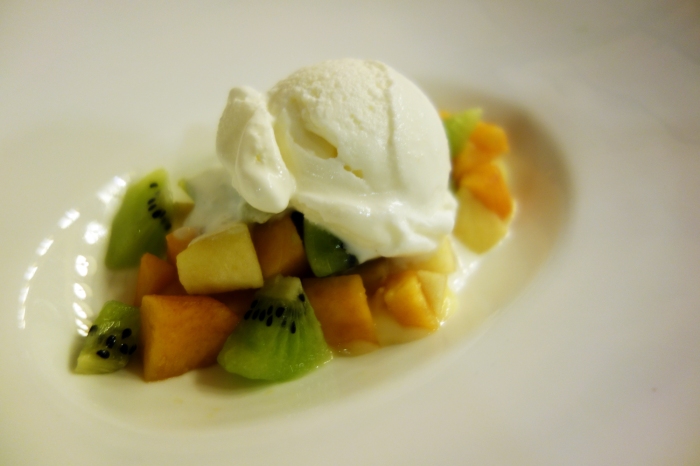 Montsant rosemary appeared again in dessert, playing the lead role as the ice cream that topped our fruit salad. I don’t know enough yet about local fruit producers to try and figure out where the kiwi came from but the fruit seemed fresh. They were perhaps diced a bit too small for my liking.  The ice cream was rich and smooth, with very concentrated rosemary flavor that brightened this dish up and cleared the palate of roast goat and wine. 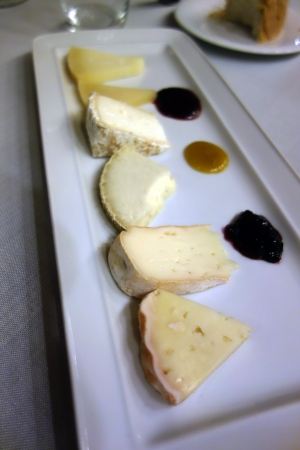 We threw off the natural order of things by strapping on a cheese course last minute. It’s not something to miss. Some local favorites are displayed along with homemade jams to pair with. There are two cow’s, two goat’s and two hard sheep’s milk cheeses, with varying degrees of flavor and pungency. My favorites were the second cow’s milk cheese, the stinkiest of the plate, and the crumbly goat cheese with its bright white paste and mold-studded rind. The jam made of sweet, ripe pears was perfect to pair to the saltier of cheeses .

My only regret of the night was not having tried any of Chef Bru’s rice dishes, for which he is also quite well known. Something tells me I’ll be back at Celler de l’Àspic soon though, perhaps even to try the autumn menu. It’s a night, a treat, a lesson I’m already looking forward to.