Breakfast at our all-inclusive luxury resort in the paradisical coast of Punta Cana was a leisurely and drawn-out affair. Greeting us in the restaurant was an endless array of anything and everything we could possibly imagine craving from 7:30 to 11:00a.m. before a day spent lounging by the pool or beach.

There was a bar of fresh fruit – the good, exotic, expensive kind – papaya, mango, passion fruit, pineapple, guanabana. There was a lox ‘n’ schmear station, a yogurt ‘n’ muesli counter, customize your omelet or scramble, pour your own waffles or pancakes, oatmeal in three different “cuts” with maple syrup or honey, butter pastries sweet and salty, the open-faced sandwich option with an impressive myriad of deli meats and cheeses, the “chubby American on vacation” section with fried eggs, bacon and sausage. There were some bizarre items, such as breaded and fried cheese balls, steak tips and chicken wings. If one were craving a burger, for some reason or another, a guy would run back to the kitchen where the chef would whip up a tray of sliders with a variety of toppings to keep things interesting. The buffet also extended to boozy brunch beverages: countless mimosas and bellinis flowed forth from unlimited champagne. A DIY Bloody Mary bar also joined the crazy selection of fresh fruit juices and shakes out of which the cucumber-avocado juice and papaya milkshake vied with bottomless mimosas for my attention.

A rather neglected area of the sparkling food showroom was the Dominican breakfast arrangement, the protagonist of which was the tres golpes or “three hits.” This refers to the popular combination of 1) eggs, 2) cheese and 3) “salami” (read: bologna), all fried; the Irish breakfast of the DR. It’s served with sticky sweet plantains, fried tostones or something called mangú that I tried on our second morning there. 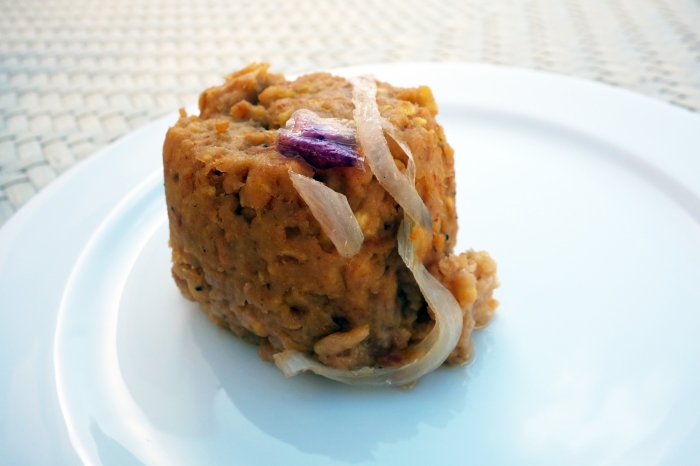 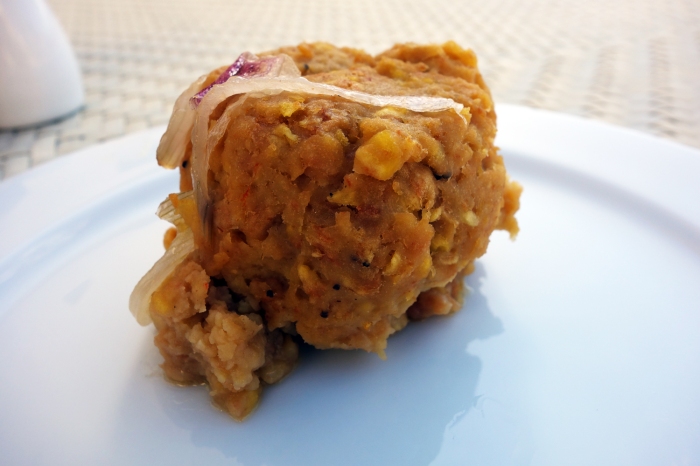 It’s another plantain creation made by boiling platanos verdes (green, unripe plantains) in salt water, slicing and then smashing them with seasonings, similar to how one would make chunky smashed potatoes. Some of the boiling water is added back into the mix to keep it hydrated, a spongy and moist mash with a few firm lumps scattered about randomly. It’s topped with slivers of red onion boiled in apple cider vinegar.

Mangú is a dense, starchy staple that can be traced back centuries to the Africans who came to the Caribbean from the Congo during the height of the slave trade. It was then and in the time that followed a breakfast meant to fill one up and sustain one through a long day of backbreaking manual labor. Before a day lounging at the pool in a skimpy bikini it doesn’t have the same appeal. I enjoyed the comforting smoothness in texture, though it was far too dense for me and difficult to swallow without a gulp or two of papaya juice. The flavor was also a bit bland; other than crushed black pepper I didn’t pick up too much seasoning. Maybe mine was a bit too dry from sitting under a heat lamp after cooking. Maybe mangú needs fried cheese, eggs and salami (its partners in crime) to counteract its mild flavor and modesty with plenty of salt and grease.

Next time in the DR I will make sure to indulge in a complete tres golpes breakfast to get the full experience. For now, though, I’ll pass on mangú and load up on fresh fruit (and maybe some waffles and maple syrup) instead.