As another summer approaches I instinctively get to thinking about returning to Hungary to visit the family and sinking my toes into the sodden, silken sludge of Balaton Lake. I think perhaps too much about where and what I’d like to eat: velős pirítós (herbed calf brain on toast) in Balatonfüred with a crispy cool glass of Irsai Oliver from Badacsony; a paprikás stew of chicken, beef or catfish on a mound of nokedli egg noodles and Hungarian pickles from Vecsés; perhaps a sour cherry or poppy seed rétes (akin to strudel) from a pastry vendor in the Central Market Hall. Fish stew (halászlé), fried dough (lángos) and crunchy goose cracklings (libatepertő) on toast with coarse salt and red onion are also on the list. Each trip home comes with its own set of cravings, as my taste tends to vary from year to year. But at grandma’s house things stay more or less the same and I certainly would not have it any other way. You’ll find me in her kitchen at 1 p.m. sharp, my butt planted firmly on a dainty white stool, my feet in her slippers three sizes too small dangling down to the checker-tiled floor. I’ll be recounting the last year or so of my life while watching as she proceeds to do her thang.

Lunch starts with a bowl of boiling hot soup always, regardless of the weather, heat or humidity. Each one usually features a single vegetable (e.g.: beans, peas, cauliflower, or potato) with or without chicken parts cooked in. A more intricate meat consommé is prepared by stewing beef marrow bones and root veggies for hours, patiently coercing out several layers of flavor. Sometimes she makes a chilled sour cherry soup, which she thickens with cream and seasons with cinnamon and clove. This one’s a sweet and refreshing alternative to the hot ‘n’ sweaty paprika-laden classics. My grandmother has her specialties and each member of the family has his or her favorites. I tend to request the same dishes each summer.

One of my personal favorites is her mushroom and chicken soup. As most Hungarian dishes, this one starts with a base of pork lard. A few spoonfuls go into the bottom of a pot to which chicken bits are then added. It’s a wild melange of hearts, gizzards and liver; necks and feet with the skin left on. Those get a bath of water to cook in, along with salt and pepper to help the flavors bleed out into the broth. Along the way some carrots, parsley root (known in Hungarian as “white carrot”) and potatoes can be added as well as a sprig of parsley to contribute a fresh, green flavor.

Button mushrooms are carefully sliced paper-thin and thrown in once the broth has taken on some color. As the chicken simmers, its bones let out clouds of brownish-grey foam that float to the top and linger there until being snatched off with the ladle. 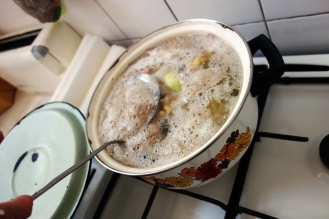 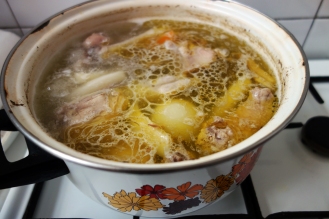 Next comes the rántás, a roux prepared in a separate pan with lard and flour, seasoned with bright red paprika and freshly chopped parsley. This is arguably the most complex part of the recipe as the roux must be completely smooth and consistent in texture. Water is added drop by drop to the toasted flour with one hand, while the other stirs the ingredients with a vigor requiring patience and considerable upper body strength. As my grandmother blends fat, powder, herb and water into a smooth, maroon paste my brother and I ogle at her from the side. “Here is where I fail each time,” he laments, in reference to his own lumpy soup roux.

When completely smooth and even, the roux is carefully incorporated into the broth, thickening the latter while also adding flavor and color to the dish overall. The soup is left to simmer until the ingredients come together and until the mushrooms reach a tender yet firm texture. The pot arrives to the table and my grandfather serves, asking each family member what chicken part they prefer but surely knowing our answers already through decades of serving us the same. I usually go for one neck and one foot, slipping the loose, juicy skin and soft bits of flesh off the bone. A dollop of bright white Hungarian sour cream, our most sacred condiment, must also be added to bring a creamy smoothness to the broth. 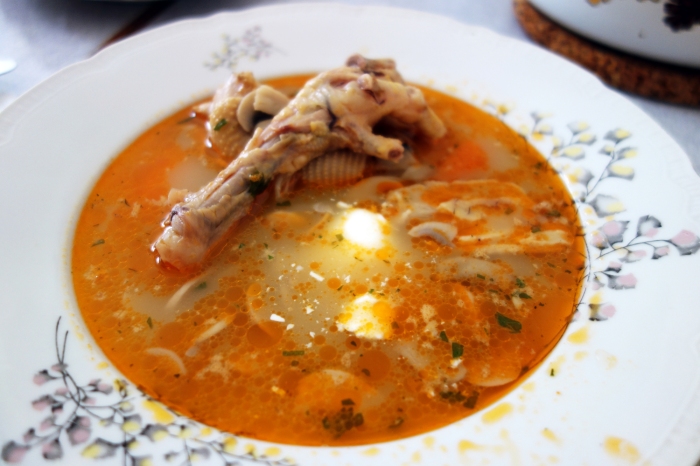 Another “Lili-comes-home classic” is a főzelék, a type of Hungarian comfort food that generally consists of one vegetable simmered until soft and made into a type of sauce that lies somewhere between a soup and a stew in consistency. It’s actually a source of much scandal within the family when I ask my grandmother to prepare a főzelék. Why?

In Hungarian culture there’s a significant difference between celebratory weekend/holiday dishes and more modest weekday grub. Főzelék‘s of all kinds fall into the latter category, while meatier dishes and stews are reserved for weekends. Ironically, since meat is so much cheaper (in relation to vegetables) in the U.S. than in Hungary most Hungarian-Americans residing in the U.S. (such as my parents) prepare what are traditionally considered weekend or special occasion dishes pretty much on a daily basis. My mother cooks goulash, breaded pork cutlets, chicken paprikás or Hungarian pork and rice (rizses hús) whenever she feels like it, be it on a weekend or a random Wednesday night. So these are actually dishes that I don’t particularly miss. When I return to Hungary each summer my grandparents assume that these are exactly the type of dishes I want them to prepare because for them growing up they were the expensive treats marking special occasions. When a guest comes it’s what you honor and impress them with. I tend to eat at my grandparents’ house on weekends and to them it seems bizarre to prepare a lowly vegetable főzelék for the Sunday meal. My grandmother laughs it off and makes it anyway, happy to please my palate and help me remember my childhood. For my grandfather it seems an outright offensive proposal. But, well, I’m only home for about two weeks per year so I pretty much have free reign in requesting whatever the hell I want, “weekend dish” or not. And each summer the dish I crave the most is sóska főzelék. 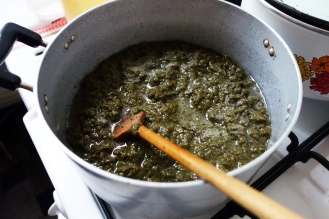 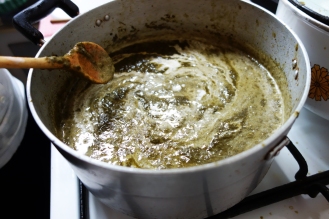 “Sóska” is sorrel, a leafy veg similar to spinach, which is for some reason or another pretty difficult to find (fresh or frozen) in the States. Its fundamental difference from spinach lies in the mild tartness characteristic to its flavor profile. To balance out the acidity, sugar is added and the result is a very specific sweet, sour and vegetal taste that holds deep sentimental value stemming from my childhood.

It starts with sorrel, fresh or frozen, in a pot with some water. It’s cooked down to a tender, chunky, wet texture before being mixed with a habarás, another type of Hungarian roux made with flour, sour cream and a bit of milk. This type of roux is commonly used to thicken a főzelék and other dishes that do not use lard in their preparation. Crystal sugar is added after the roux is completely incorporated with the sorrel and the pot is left to simmer until the sorrel “absorbs” the roux and thickens into a sauce. Some home cooks blend the stew for a smoother consistency, though my grandmother’s preparation leaves the stuff pretty even without requiring any electrical appliances.

As with all vegetable főzelék‘s, sóska is served poured over or with a side of some kind of protein and chopped, boiled potatoes. Popular proteins include a fried/poached egg, a fried/grilled frankfurter, a breaded pork/chicken cutlet or a slice of Stefánia vagdalt (similar to a Scotch egg). My grandmother’s protein of choice is the meatball, which she makes from scratch with fresh ground pork from the market. The meat is mashed up by hand with a few egg yolks, garlic and parsley. Only salt and pepper are added to season. 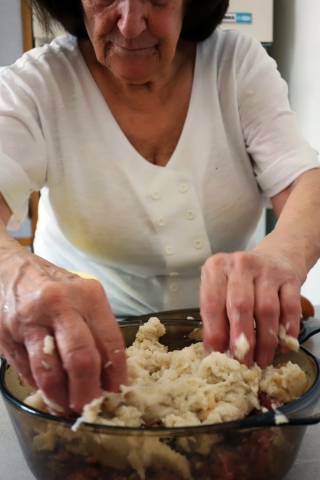 She also adds zsemle, which is a type of round bread roll popular in Hungary for breakfast or for sandwiches. She soaks these in water until the interior becomes plump and soft. She then removes the drier, toasted brown exterior as bits of this stuff tend to develop clumps that cause the meatballs to crack during the frying process. Once the fluffy, white bits of wet bread are added my grandmother delicately folds these in with the meat, taking care to not overwork the pork. She scoops up bits of the meat, forms small balls in the palms of her hands and rolls them in dry breadcrumbs that have been ground off stale bread and saved in the cupboard in a little container for breading purposes.

The meatballs are fried to a beautiful golden brown and lain on paper towels that soak up the excess grease. A coarse, crunchy, salty exterior coats a steamy, moist ball of tender pork. These are always most satisfying fresh out of the pan; with my brother and I preying vulture-like over each tasting opportunity, usually only about three-quarters of them make it to the table. They’re served alongside a smooth puddle of sóska, with or without potatoes on the side.

These are, of course, only a few of my favorites and I hope to record many more in the summers to come. As I grow older I notice a growing propensity to cook for myself and a loved one. It’s an urge I haven’t really felt until the past few months and now that it’s upon me there’s nothing I’d rather start out with than these family recipes.

3 thoughts on “Hungarian Favorites: In the Kitchen with Grandma”