In discussing the myriad of culinary experiences I’ve been part of in the past few years I generally make it a point to avoid delving into the quality of the service, especially when it does not significantly affect the atmosphere of the venue or the quality of the food. I’d like to avoid being mistaken for the narrow-minded, overprivileged snob tourist who gasps at the sight of a smudged glass. I am not this person. In fact, I’m generally too preoccupied with ordering the right thing and remembering each dish to even notice the service. If the food is good I’m pretty easy to please. In Barcelona I’ve lowered my standards and have come to expect the inevitable 10-minute wait for the menu. I’ve gotten used to chasing the averted eyes of lazy waiters who just don’t feel like bringing you the bill right now… maybe in five minutes. It’s fine. I get it. There’s no tip and thus no motivation to please patrons, to move tables quickly, to guarantee repeat business from generous regulars, to smile even. Although it’s unfortunate it makes sense, and I still prefer not leaving 25% for a waiter who bring me a snapped-cap bottle of Estrella Damm with a ramekin of salty crunch’ems. But I digress. My point is that I’m not Yelp. I don’t review service, cleanliness, or the host’s ability to kiss my ass. I do make exceptions when writing about situations in which the love and care of the kitchen resonates through the service or when “service” signifies something special; a Dominican lady handing me frituras she just prepped in her backyard frier or a fisherman reaching up out of a boat sunk low on the Potomac to hand me a tray of freshly shucked oysters and crab legs, for example. I also include a description of service when the quality of the latter is so profoundly abysmal as to ruin the meal altogether, regardless of the food itself. This is the treatment I was unfortunate enough to experience at Carles Abellán’s highly regarded BRAVO24 at the W Hotel.

My expectations were high. I’ve raved about the McFoie Burger at the Michelin-star-spangled El Bulli alum’s more accessible tapas bar, Tapas24. I’ve sopped up luscious sauces with the best pan amb tomaquet in Barcelona at his Suculent in the Raval. I’ve heard good things about Comerç, 24 and, indeed, I walked into a beautiful seafront dining room at BRAVO24. My man and I were not in the best of spirits when we got there at dinner hour on a Wednesday night, a midweek-hump date-night of sorts, not a particularly celebratory occasion. We sat and ordered wine, which came smoothly enough and off a very nicely curated list that included a 100% Samsó I was especially fond of. The front pages of the menu displayed a very cool diagram of Barcelona’s rich culinary history, dating back to the Romans and explaining the various foreign influences that helped form Catalan cuisine. The description of each menu section offered a fun little history lesson I genuinely appreciated.

When we started with our tapas to share the flow was shattered, and what followed was a painfully awkward meal replete with blunders and oversights that are, frankly, unacceptable from the waitstaff of such a loudly lauded restaurant. This is a shame because the first two dishes were actually quite wonderful. We had the croquetas de jamón ibérico, Abellán’s take on this very modest, deep-fried bar food classic. It’s the same as the version I’ve had over at Tapas 24, a croquette that continues to be my favorite in the city. A crunchy, sandy and golden-brown crust spread thin over a filling of thick, smooth béchamel caramelized here and there for intrigue. Bits of salty, oaky ham lingered long on the tongue, saturating the cream with flavor.

The bacalao fritters were also fantastic. The crispy little balls were filled with moist shreds of salt cod, whose pungent flavor went beautifully with the clean notes of lemon and sticky, floral honey served on the bottom of the plate.

Unfortunately we could not enjoy these little snacks the way the kitchen had probably intended for them to be enjoyed. As he brought them to the table, our waiter interrupted our conversation with zero sophistication to introduce them, served them from the left despite my deliberate lean away from the opposite side and nearly tripped over the purse I had placed on the carpet without offering to pick it up or put it on the back of my chair. The same waiter allowed us maybe five minutes to enjoy the dishes that were otherwise fried to order, piping hot upon serving and thus impossible to eat for at least two minutes after arrival. After those minutes were up he once again interrupted our conversation with the grace of a foraging wild boar to suggest clearing the apetizers. Since about half of the fritters still remained my boyfriend silently grabbed two to put on his own plate and asked if I wanted the last one, while the waiter stood impatiently by our table. I could swear I even heard his feet tapping at one point.

My boyfriend ordered the Arroz Barcelonés, a classic rice and seafood dish similar to paella that comes scraped out of cast iron sauté pan and traditionally plated table-side at restaurants. Our waiter scooped the rice with about as much enthusiasm as that of a dental patient awaiting orthodontic surgery. The menu description boasted prawns (of which there were two), clams (of which, also two) baby cuttlefish (which I didn’t even come across) and jamón (which was also barely discernible). The rice was otherwise pretty well cooked. After emptying about half of the contents onto a plate our waiter wheeled the pan swiftly away, leaving my boyfriend gazing after it and wondering whether he’d get to eat the other half of the rice for which he would be paying 30€. (He didn’t.) 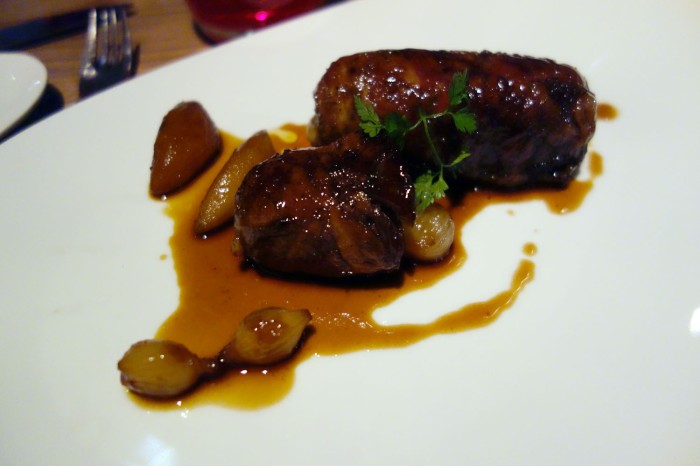 I ordered from the English menu a dish of veal cheeks plated with pears and pearl onions. Our waiter introduced it as “lamb shoulder” upon its arrival at our table. As the cut was clearly shaped like a mammalian cheek and had no large humerus sticking out of it I suggested to him that the dish may in fact be veal cheek, as it had appeared on my menu. He left to ask a fellow waiter and returned to “confirm” that it was indeed carrillada de ternera. So, veal. I took a few bites of what I actually still believe was veal, if not the breed of very, very, very mild lamb; shortly after a waitress came out to correct her colleague. According to her the meat actually was lamb, lamb cheek to be specific. As it turns out, our waiter had just agreed “veal” to humor me. Fortunately, I have no medical or religious restrictions when it comes to lamb; otherwise those first few bites could’ve lead to a more serious situation.

I don’t actually remember what the thing tasted like at all, though I remember beautifully tender and juicy shreds of flesh tumbling forth from the cut as I probed it with my fork. I was too busy trying to understand how a 40€ entree consisting of a single piece of protein (plus three pearl onions scattered around) could be misprinted on a menu of a restaurant of this caliber and, more shockingly, how the waitstaff could be so incredibly uncaring and incompetent in informing the customer of exactly what type of animal they were putting in their mouth. Out of the 4 or 5 entrees that were available to us that evening (about half of the original menu was not) it wouldn’t be too much to expect from the waiters to at least be able to identify the central ingredient in each. When the only very slightly more apt waitress recognized the mistake she offered (not quite politely enough) to replace the dish with another. As I preferred to eat dinner together with my dining companion instead of half an hour apart, I refused. By this point the tension at our table was palpable. We were both tense and frustrated with the service. My boyfriend had made a comment about the tone I had used to correct the waiter. I needed a break and walked to the ladies room. When I returned to my seat I found my plate gone. The waiter had taken two thirds of my dinner without asking my companion if it was okay to do so.

Both waiter and waitress suggested dessert on the house, which we politely refused as we really just wanted to get the hell out of there as soon as possible and smoke a cigarette to calm down. Despite our refusal our waiter forced a small dessert plate in front of me. It took both of us repeating “no” thrice for him to shake his head disapprovingly and remove it. When the bill came I was positive that my dish would not appear. We were both quite shocked to see that it did. So 20€ for snacks that were rudely pulled out from in front of us, 30€ for a half of a protein-scant paella, 40€ for less than one third of a piece of mystery meat, which remains a mystery until today. Honestly it would have been worth twice this sum to avoid such a disaster of an evening. Luckily my dinner companion and I found humor in how atrocious the service had been and comfort in the realization that it had affected us equally. So the witless waitstaff at BRAVO24 didn’t manage to completely ruin our night. They sure made their dent though, enough for us to avoid the place for the foreseeable future.