I’m not quite sure whose birthday we were celebrating back in the August of 2014 at the restaurant terrace of the esteemed Savoy Caste in Ráckeve, Hungary. I remember my niece being there, my brother, his wife, my cousin? But while the memory of faces has long since faded, I remember the mood and food in almost perfect detail.

The Savoy is an 18-century chateau designed by Johann Lucas von Hildebrandt and constructed in the Baroque style. During the reign of Austrian Maria Theresia, the castle and its estate came under the Hungarian Chancery’s management. Unfortunately the middle of the mansion, including its cupola, was destroyed by a fire in 1814 and was rebuilt shortly after. In the 1980’s the building was totally renovated and turned into a hotel with a restaurant serving home-style Hungarian classics. 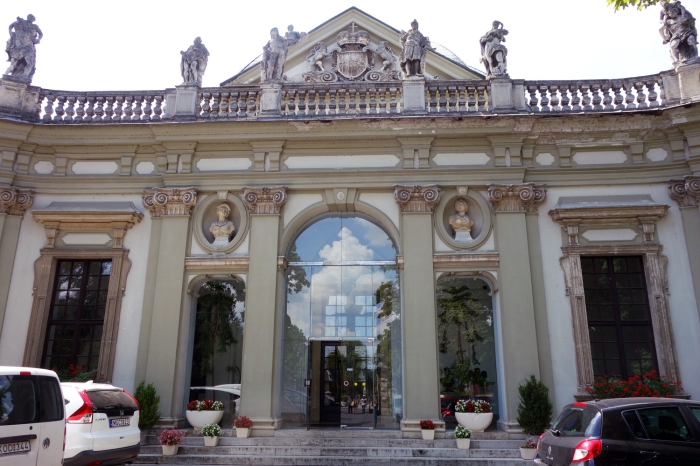 During the summertime the indoor tavern-y restaurants gets an al fresco touch. The buffet is served on a stunning patio surrounded by a green garden with the branches of ancient trees hanging over tables dressed in white linen. I remember excellent, attentive service, music, perfect weather and a fantastic mood. I also remember sitting around and talking to family, going back to refill my plate three or four times.

But what exactly did I choose?

An array of three Hungarian soups. First, a chilled sour cherry soup that is especially popular during the summertime. The broth is silky smooth and slightly sweet, perfectly accented by the sour flesh of the cherries. Personally, I prefer my grandmother’s version but I guess that goes without saying…

Next, tyukhúsleves, a golden broth packed with the flavor of the hen meat and vegetables stewed inside for hours (specifically to coerce out all those gorgeous flavors). During family meals at home we eat this broth as an appetizer, followed by the tender beef, carrots, parsnips, cabbage, potato and kohlrabi cooked inside, dipped into white horseradish or hot mustard. Often restaurant versions of this dish tend to be a bit greasy, but this one was perfect, with plenty (but still not too many) grease puddles floating on the surface. 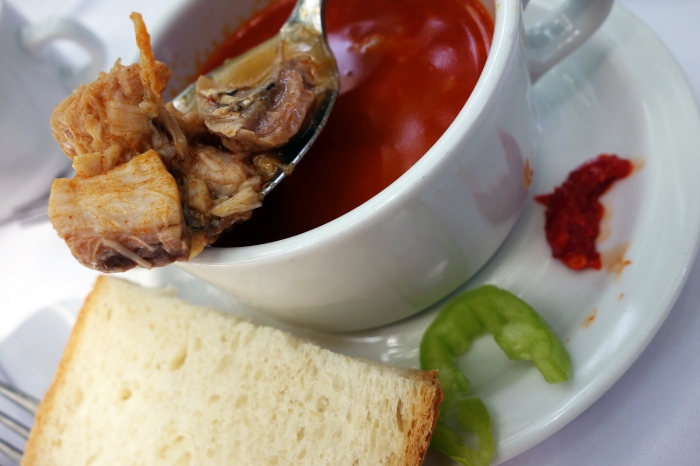 And finally, halászlé made with catfish served with some hot red pepper paste to stir in according to taste. A beautiful, bright red broth seasoned with plenty of paprika, which balances, but does not mask, the murky fresh-water flavors of the catfish. A delicious combination. The fish was cooked to a great texture as well. Very good, though I prefer when the fish’s belsőség (innards, most often its roe) is stirred in at the very end for an extra layer of flavor and a thicker texture. This version was lacking this and was perhaps to smooth and subtle for me.

As with any lard-based and paprika-spiced Hungarian culinary classic, it’s an absolute must to load up on pickles, every Hungarian’s summertime side-dish. At Savoyai the array of options is wonderfully generous. They had pretty much all of my faves. These include csalamádé (sweet and sour pickle of cabbage, sometimes mixed with other pickled veggies), kovászos uborka (a summer pickle made with a gherkin pickled with a slice of bread by letting the jar out in the sun), tomato with garlic and two different types of cucumber salad (sweet and sour vinegar pickle, and sour cream & garlic cucumber). No trip to Hungary in the summertime is complete without at least trying one of the two cucumber salads popular here. They are tart, crunchy and a wonderfully refreshing pairing with the often heavy, greasy meat dishes. 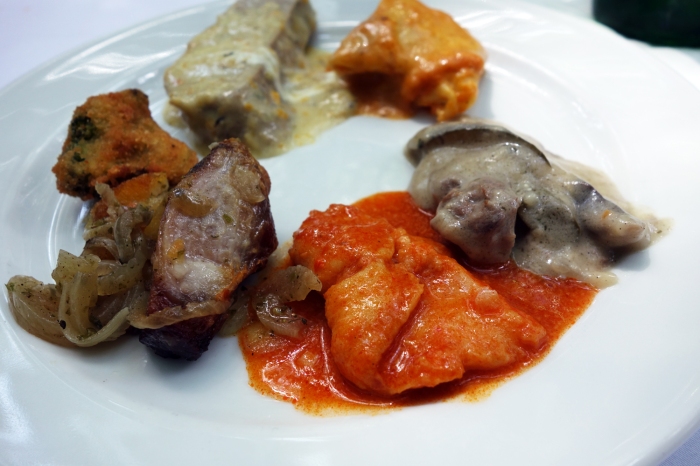 Instead of choosing just one dish I decided to create a carnivorous sampler platter of all of the meats available at Savoyai’s restaurant. I remember a harcsapaprikás, a less soupy version of halászlé. This is a tender filet of carp covered in a thicker, bright red paprika sauce. There were several types of grilled and roasted beef and pork, as well as chicken (which I avoided since chicken isn’t really meat anyway). There was vadas, one of my favorites, a slow-cooked veal stew with a thick orange sauce made of blended carrots, parsnips, onion, bay leaves, a bit of lemon juice and mustard for tang. And another one of my favorites, pork loin with a creamy mushroom sauce, although my mother’s more peppery recipe wins in comparison. Finally, no Hungarian feast is complete without Hortobágyi palacsinta, a savory crepe stuffed with ground meat and drenched in a deliciously creamy paprika sauce. If your’re like me, a bite of this is perfectly enough, as it is one of the most filling dishes of Hungarian cuisine. It’s certainly difficult to not eat a whole pan-full though.

And finally, a great big lecsó cooked in a gigantic paellera-like pan, the Hungarian equivalent to French ratatouille, Spanish pisto, Catalan samfaina, Majorcan tombet. But, of course, a bit different. The classic Hungarian lecsó is a thick ragout of Hungarian wax pepper, tomato and onion, which are fried in lard rendered out from smoked szalonna (fatback, or bacon). This particular lecsó also had potatoes and eggs beaten in to thicken the sauce. On a hot summer day, with a tall order of pickles on the side, this is one of my favorite dishes.