July 4th of 2014 found me in my nation’s capital drinking Blue Moon’s in a bar on 14th street and watching Germany beat France and Brazil beat Colombia in the quarterfinals of the World Cup. I saw the fireworks from a friend’s rooftop downtown and crashed a GWU frat party that raged all through the night. As my taxi zipped up 16th in the early dawn, I wished America happy birthday and, simultaneously, bid it adieu. The next morning I was on a plane to Budapest, not to return again for (by now) one year. On the morning of the 4th this year I woke up in Barcelona with a patriotic smile on my face. I miss my country sometimes, after all. I sat up in bed humming the National Anthem and screeched like a bald eagle at my boyfriend, still half asleep. “We’re doing some American stuff today, baby,” I declared.

We got Honey Mustard & Onion Snyder’s Pretzel Bits, a Twinkie and a couple of Sierra Nevada Pale Ales at the Taste of America store on Carrer d’Aragó. I wished the painfully apathetic Catalan cashier girl a happy (American…) Independence Day and we left to go cheers with the beers on a bench outside. For lunch we hit up one of the only restaurants in the city that even pretends to be American, unsurprisingly a diner. Bernie’s Diner. 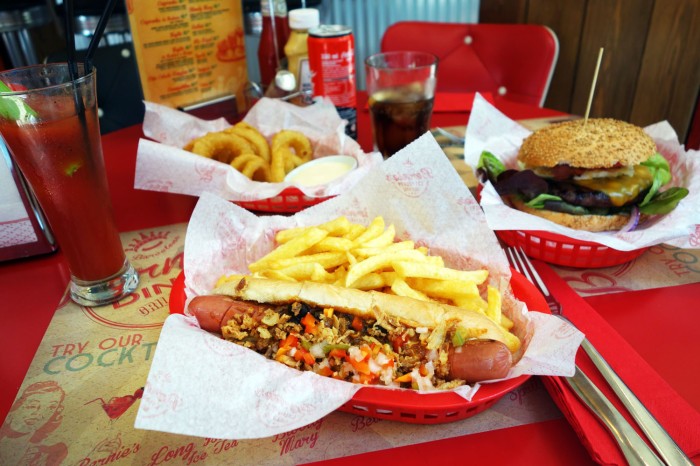 Bernie’s Diner is, first and foremost, a theme restaurant riddled with cliché Americana. Cherry red booths, Heinz ketchup and mustard, vintage posters of buxom, booty-poppin’ pin-up gals winkin’ at ya while you scarf down your burger and fries. And yeah, Bernie’s has most of the stuff. There’s a good selection of milkshakes, a club sandwich, nachos, wings and mozz sticks to share. For breakfast there’s pancakes, bagels, huevos rancheros and eggs Benedict, not to mention the quintessentially American “overpriced fruit cup.” Dessert is, of course, the mighty foursome: brownie, cheesecake, apple pie, and ice cream sundae (in this case, a banana split). A menu section titled “Mama’s Specials” lists chicken fried steak and fried green tomatoes. But some stuff is missing. No meatloaf, no tuna melt, no BLT for lunch (and the breakfast option is with a brioche bun, not regular old white bread), no waffles for breakfast or french toast or hash browns. The place is lacking, first and foremost, in authenticity. But I guess on July 4th the America that the Spaniards see in the movies is better than no America at all. So I ordered a chili dog and slurped my Bloody Mary, satisfied and silent.

My boyfriend got the American Rodeo, a 200-gram beef burger topped with a melted slice of cheddar, a fried egg, some bacon, tomato, lettuce and red onions. The patty was of good, crumbly meat. The cheddar was sharp and real, the veggies fresh, and the buns sufficiently sesame-spotted and fluffy. I found the bacon a bit rubberier than it should have been; the rashers left me craving for a crunch. All in all, not the best burger I’ve had in Barcelona (that’s still the Suiza at Bacoa), but perfectly decent and substantial, especially for the price. 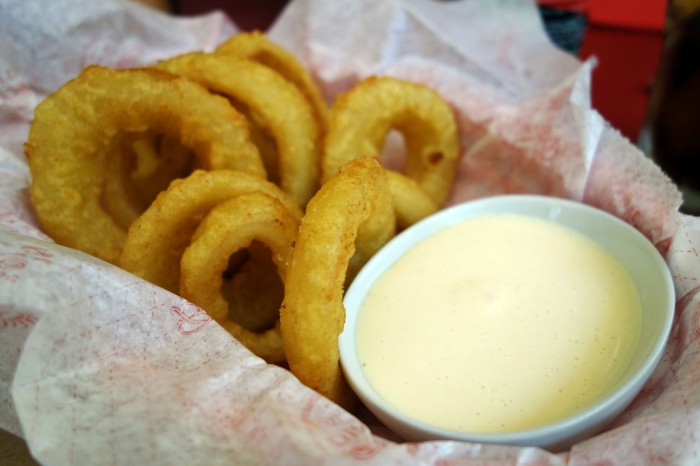 We shared a side of beer-battered onion rings, which came with a special house-made “snack sauce” that tasted like a mix of cream, mayonnaise and some sort of cheese. A sauce to make you feel horrible about yourself after finishing all of it, a true American condiment indeed. The rings were good, though a bit greasy, as if they had been added to oil not hot enough. Or maybe they were not shaken or patted down after the deep-fry. The coat was nevertheless crunchy and the onion inside thick, cooked to a perfectly tender, delicate texture. 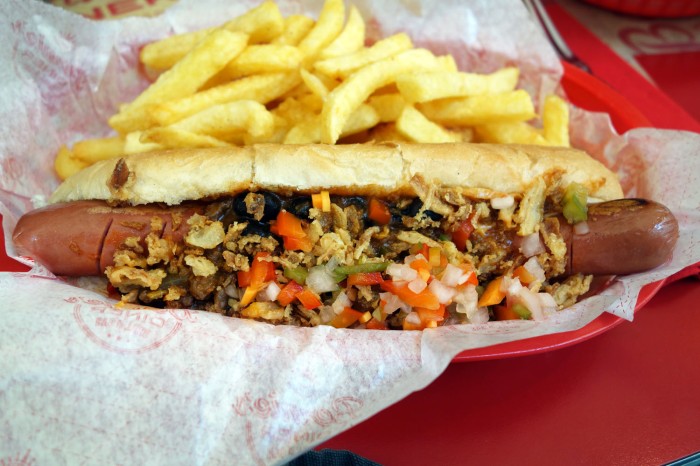 My Dixie Dog was a quite a long weiner sheathed in an airy-light hot dog bun and topped with a generous ladleful of chili con carne, delightfully fake-ass “cheese” sauce, crispy onions and pickled veggies. Each bite contained the tight snap and gummy chew of the frankfurter, the soft bun moistened by the melted cheez and the steam from the chili, the crunch of fried onions and the zing of pickled veggies. The very mildly spicy chili dominated in flavor, but was nicely contrasted by the pickles and the super salty liquified queso. A sloppy, happy mess of no-brainer tastes and textures, a perfectly appropriate dish to celebrate the day.

The diner called Bernie’s is, by all means, an exaggeration, with a menu that pokes fun at the sloppy side of American cuisine. But for a day like July 4th it kind of works. I know I’ll be back someday for breakfast. Probably not anytime soon, though…