There exist several theories in my family about when and where my passion for good food (and writing about it) began. The sparks of inspiration are often suggested to have been the traditional dishes at my grandma´s house or the ones at my other grandma´s house, mango biche at a cart in Mexico City, a lapin aux escargots in Montreal, a “peppeyoni on it” pizza from Pizza Hut in Boca Raton when I was like 5, the massive brunch spreads with smoked salmon, egg salad and everything in between prepared by my Swedo-Hungarian aunt. Another theory is that I´ve always been obsessed and that even as a baby I woke up to the feintest sound of wrappers crinkling. I cried until I learned how to ask questions and when I finally did that, I asked “Mit eszel? (What are you eating?)“

Personally, I don´t remember at all. I know that I went through several phases, ones in which I didn´t really care what I was eating and ones in which food was actually my enemy. I remember having been hassled by my mom for eating both too much and too little. I remember not having liked olives at one point, which today seems absurd to me. I also remember some meals particularly well – my mom´s mother´s fried chicken and stuffed pickled cabbage, my dad´s mother´s sour cherry soup and carefully decorated Russian salads, my mother´s mix of Hungarian classics with local and international dishes and all the wonderful things I´ve tasted during my travels. But to me there was not one dish, not one cook nor chef, not one place that started this.

My mom argues that my love for the good stuff began during a time shortly after we first moved to Boston, when she was working at Hi-Rise Bread Company in Cambridge while waiting for her Hungarian physical therapy license to be transferred to Massachusetts. Opened by Rene Becker in 1996, the focus at this place has always been on bread and the use of the right quality organic grains milled to Rene´s exact specifications by small, independent, local mills. Butter-friendly, European-style baked goods were only later incorporated into the menu, along with soups and sandwiches. 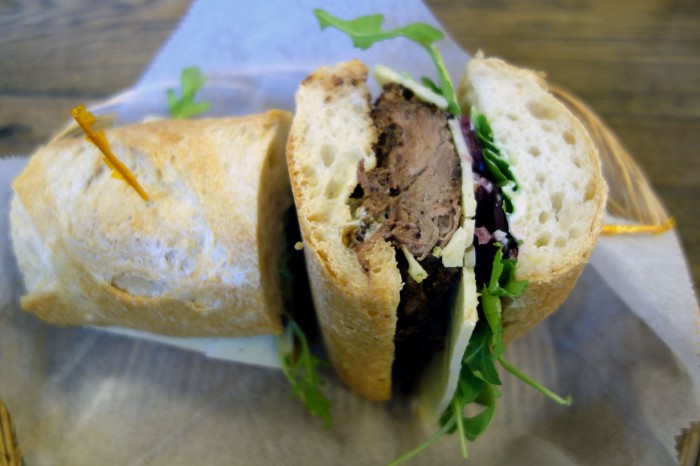 The Jeneric with hunks of smoked pork, a salad of chopped olives, caramelized onoions, roasted red peppers, chive aioli on a baguette

I remember my days at the John M. Tobin Elementary School, where I didn´t have too many friends because of my accent and general ignorance of American culture. On my way home in the afternoons to home-school the Hungarian curriculum I´d sometimes stop at Hi-Rise and my mom would give me one of their massive chocolate chunk or Nutella and pecan cookies to take with me. They were heavenly, like dense and buttery pucks of rich dough and gooey Valronha chocolate that melted under the heat of my palate. Sharing them helped me makes friends and they were delicious enough to stay in my memory for 15 years.

My mom would also bring home bread, Rene´s bread – yeasty sourdough, the Concord loaf or rye, ciabatta, challah, crunchy, veiny baguettes, potato buns, ¨flutes¨ (baguettes a l´ancienne), whole wheat ficelles, cornbread, brioche, walnut or raisin pecan loaves, pain de campagne and their wonderful brown bread made with dark molasses. It was at that time that I learned the difference between breads best grilled and those better un-grilled, sandwiches better pressed or un-pressed (or grilled but not pressed, or un-pressed on toast.) It was around that time, as my mother was getting a crash-course in the complex art of sandwich-making from the rising star of the Cambridge bakery scene and, no doubt, applying her attention to detail previously exercised in healing her patients to said art form, that some of this information also filtered indirectly down to me. I came to hear more and more about finding the right ratio between ingredients, making sure each filling was at the right temperature, the struggle between moisture vs. crispiness, the tricks behind creating dynamic yet harmonious flavor combinations, how to know how much green to add, picking the right cheese to combine with various types of protein, deciding whether that cheese should be melted or unmelted, knowing when a sandwich needs a thick spread rather than a light brushing of vinaigrette, when a vegetable is best left raw and when its better sun-dried, pickled, roasted, grilled, which bread to use in each situation, whether to leave toast hot enough for the spread to melt against it or whether to let it cool before adding the spread… things like that.

One of my favorite flavors at Hi-Rise is that of their house-made curried chicken salad with cashews, which I´ve had in salad and sandwich form multiple times. The chicken salad is made from fresh, organic and antibiotic-free Bell & Evans chicken that is roasted in their bread-oven to a tender, juicy texture, chopped into hearty cubes and mixed up with a bit of house-made mayonnaise and cashews for crunch. This wonderful salad is featured in one of their very weirdly named chalkboard menu sandwiches, the Mahatma Gloves. The very popular signature sandie is built between two chewy slices of sprouted wheat sourdough, with a high pile of chicken, a very complex sweet-and-salty mango chutney (also made in-house) and some delicate baby spinach.

I adore this sandwich, even though it´s generally “not my type.” I tend to prefer pressed things with melted cheese oozing out between warm slices of crunchy bread, roasted tomatoes or eggplant or salty, smoky, fatty pork peeking out between juicy bundles of caramelized onion. This one is not toasted, the leaves are fresh, the ingredients all cold and it´s made with chicken, which I usually consider the most boring protein. But it´s awesome nevertheless.

The luscious hunks of jammy mango and sweet raisins in the chutney go beautifully with the soft pieces of chicken and the baby spinach provides a fresh snap to keep things light. The bread is firm enough to not get soggy from the moisture of the chutney, yet it´s delightfully spongy and delicate with a thin, crunchy crust. This is a truly unique sandwich that achieves fantastic balance in both flavor and texture. It also allows Hi-Rise to show off their epic bread skillz, as it features their sprouted wheat sourdough, which is a type of bread commonly thought impossible to make light and fluffy. The sprouted grain breads I know are generally dark, coarse and not very appetizing at all, the kind of stuff raw food dieters love to bring on camping trips. How Hi-Rise manages to make theirs so light and airy is beyond me.

No trip home to Boston is complete for me without lunch at Hi-Rise. Their Mahatma Gloves and Cindi Bindi (another one of my favorite sandwiches, made with egg salad, bacon and lettuce on toasted wheat) will keep me coming back for years to come.