We arrived in the super-Catholic Spanish city of Córdoba at 3 p.m. on Good Friday, the last day of the very somber Semana Santa (Holy Week), and braced ourselves for a long night of religious processions. The streets were packed with terrifying Nazarenos, anonymous under their cone-shaped head gear, carrying large candles, people everywhere declaring their unwavering faith to Christ. At one point, a shiny, gold-plated float housing the image of the Virgen de los Dolores appeared at one of the entrances of the Mezquita-Catédral and was then carried through the historical quarter of the city. With the ancient structures lit up against the night sky, it really was a spectacular ceremony to behold.

For us, it unfortunately also meant that restaurants were packed to the brim with locals and tourists. We took our pre-dinner drinks standing outside at bars and watching the procession instead of trying to find any place inside. When we finally got hungry it took us a while to find a seat. It was pure luck that lead us to Bar La Cávea in the picturesque Plaza de Jerónimo Páez, slightly tucked away from the maze of narrow alleyways clogged with processioners, spectators and all that religious fervor that makes me, as it would any nonbeliever, more than slightly uncomfortable.

The cobblestoned plaza itself is very nice, with the ruins of the columnas de Córdoba and an archeology museum right nearby. The mood here was good, vibrant and local, busy but nowhere near as crazy as in the rest of the city. The restaurant had plenty of tables outside and a sign on the wall that read “Excelentes tapas, buen vino” (Excellent tapas, good wine), which at that moment was good enough for us. So we sat, order two not-so-buenos vinos and some stuff off the menu that I had been meaning to try before leaving Córdoba early the next morning. First and foremost, I wanted salmorejo…

My romance with salmorejo started the moment I allowed the first spoonful of the stuff to ooze across my palette. I had heard about it prior to our arrival to Andalucía, of course. “It´s kind of like gazpacho but thicker,” they said. But this doesn´t even begin to cover it.

Yes gazpacho is waterier. It can only be spooned or (as is my preference on hot summer days when I´m starving and want to cool down quickly) gulped directly from the bowl or from the glass bottle it comes in at the supermarket. The thicker salmorejo can be eaten either as soup (spoon –> mouth), as a purée spread messily over bread, or as a dip to dunk the same bread into. That´s because one of its five ingredients is bread. 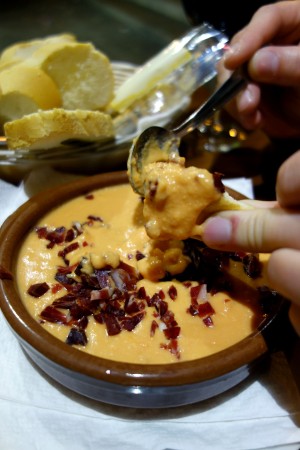 And yes, salmorejo only has five ingredients. They are 1) ripe tomatoes 2) old bread 3) garlic 4) salt and 5) olive oil. And then you can get fancy with the garnishes (egg, Serrano ham, codfish, whatever…). Gazpacho is a blend of the entire produce section of your local market, with everything from tomatoes, to cucumbers, red and green bell peppers, onions, garlic, carrots and also some bread in there. Instead of just salt and oil it is flavored with salt, pepper, cumin, olive oil and vinegar. Water has to be added gradually to adjust its consistency. It´s fussy and hectic and the end result is a less satisfying cold soup with a thinner texture and overly complex flavor. When I´m craving for vegetable juice I´d rather just grab a V-8 than go through all that trouble (or have someone else go through it for me).

The earliest forms of salmorejo are said to date back to the mid-15th century, when the folks of Southern Spain started using the mortar and pestle method of making sauces from vinegar and bread that the Romans brought to the peninsula. These recipes, earlier forms of salmorejo called “white salmorejo,” were cheap and popular among lower classes, thus not so well documented throughout history. In 1492 Christopher Columbus discovered the New World and many new products were imported back to Spain. One of these was the tomato. Although sauces and soups were occasionally garnished with this New World delicacy, it wasn´t until just a century ago that tomato was incorporated as an ingredient in preparing the sauce. Traditional salmorejo is made by whipping tomatoes in with other ingredients and slowly adding bread soaked in vinegar. Nowadays though, an electrical blender takes the place of a mortar and pestle. Also, while the thing originally started out as a sauce, it has nowadays become more popular as a chilled soup, enjoyed by locals in the summertime.

Anyway, enough about history. Remembering the flavors of this tradition Córdobés dish makes my mouth water and after this first version I ended up getting it three more times throughout our trip. The best might have been at Bar la Cávea. It was incredibly thick and wonderfully creamy, cold, masterfully whipped and clearly homemade. It was absolutely loaded with garlic to the point of making me blush and ask my boyfriend if this kind of decadence was a sin or not. “Can it actually be this voluptuous and smooth? Is such intense garlic breath even allowed?” Underneath the sting of the garlic lingered the delicate sweetness of the tomato, perfectly balanced with the vegetal flavor of the olive oil blended in. The luscious, velvet cream was garnished very simply with some chopped Serrano ham. No egg here, not as intricately decorated as at more touristy spots in town.

Oxtail seems to be another very popular dish in Córdoba and we saw it on pretty much every menu we came across during our time there. They say it became big in Sevilla in the 16th century when local cooks invented a way to use the edible body parts of the losing bulls after bullfights. These days it’s more often made with cow tails, which are more commercially available. It’s prepared in a deep, dark stew of veggies that becomes insanely complex and deeply comforting in flavor after cooking for so long. The traditional recipe calls for carrots, onions, garlic, ripe tomatoes, peppers, bay leaf, red wine and plenty of oil. It kind of reminded me of a Hungarian lecsó, which is a similar stew of meat and veggies, often referred to as “Hungarian ratatouille.” Then again, it probably reminds most people of something similar, as it is the kind of grandma classic that exists and is beloved in pretty much every culture.

And then there was the sanjacobo, which was like an unrolled version of a flamenquín but with the cheese that we were expecting and so feverishly praying for. I guess it’s a bit like a wienerschnitzel, but with cheese and ham. They also compare it to the French cordon bleu (which was actually a wienerschnitzel that migrated to Switzerland, got cheese and a fancy French name added, and eventually became a “French dish”). But the latter is more often prepared with either veal or chicken wrapped in cooked ham and cheese, whereas the Spanish version uses Serrano ham. (I guess Spain just has more of that lying around.)

The sandy crust made a nice raspy, grating noise when sliced into and the knife met with soft pork loin and jamón after that. Melted cheese oozed out of the steamy pockets of meat, very runny at first but coagulating into creamy lumps of salty dairy as it melt with the cool night air. This is a deeply satisfying no-brainer dish, especially delicious when you’re very hungry (which we were) and when you’ve had a few glasses of something (which we had had).

As we finished our wine and sloppily sopped up the last few drops of salmorejo with soft sliced baguette, we realized how lucky we had gotten with this dinner. Not too far from the most touristy part of town and on perhaps one of the busiest nights of the year we managed to find a peaceful plaza with a nice restaurant serving good local food for not too high prices. The wine, indeed, was not the best, and may have contributed to the excruciating hangovers we both experienced the following morning. Or maybe those palpitating veins on both of my temples had more to do with the garrafón rums we drank one after another for the rest of the night. Unfamiliar with the term “garrafón”? It’s that delightful tradition of pouring off-brand, or no-brand (or your friend’s grandfather’s homebrewed own-brand) bullshit moonshine into empty bottles of Tanqueray, Johnnie Walker, Jose Cuervo, Absolut and selling it for a surprisingly low price (but not low enough to raise too much suspicion). “5 euros for such a generous portion of Bacardi! I guess Andalucia did get hit pretty hard in ’08.” Joke’s on us…

I like to think that if we hadn’t had such a rich and satisfying, stick-to-your ribs meal at Bar La Cávea, we would’ve been even worse off the next morning, as we pulled ourselves, with the room still spinning, from bed and hurried off to catch the 9 a.m. train to Cádiz.

One thought on “That Salmorejo, Oxtail and Sanjacobo at Bar La Cávea in Córdoba”