Our journey continued from Alsace, across the German border, through the Black Forest and beyond, to the city of Stuttgart. Located in a bowl-shaped valley, surrounded completely by forest and wine country, Stuttgart is the capital of the Baden-Württemberg region and the home of Mercedes-Benz and Porsche. The latter becomes quite clear while driving into and around this city. The autobahn is a free-for-all performance demo of German manufacturing: Audi, BMW, Mercedes-Benz, Porsche, and Volkswagen flying without limit, confining us to the right lane and passing us at speeds of 180-185 km/h. We met my friend in our hotel’s lobby and set out for a short tour of the city, followed by a visit to the Christmas Market, where we somehow managed to drain 5 glühweine per person while catching up on each other’s lives. It was with those 5 glühweine in our bellies that we arrived at Der Rote Hirsch to dinner, ready to devour a hearty meal to soak up all that festive booze. Der Rote Hirsch is a kind of modern-day weinstube, selling their own “modernized” versions of local Schwaben (Swabian) specialties, alongside a generous selection of local wines. Unfortunately, after so many glühweine, we had no palette for more wine, so we ordered instead a very nice German craft IPA to cool our quivering gums.

To share, we ordered a Maultasche, which is a regional specialty often compared to the Italian ravioli, the Chinese wonton and the Russian pelmeni. It’s a soft pasta pocket, stuffed with a filling of spinach, minced meat, onions and breadcrumbs, seasoned with parsley and doused in a buttery sauce, which contributed a slick texture to the exterior. This version at Der Rote Hirsch came with a generous pile of caramelized onions and a wonderfully refreshing cold potato salad, seasoned with mustard and vinegar. I really enjoyed the combination of steamy hot, slippery pocket of meat with cool, zingy potatoes. And after so many glühweine on an empty stomach, we also appreciated the generous portion size. 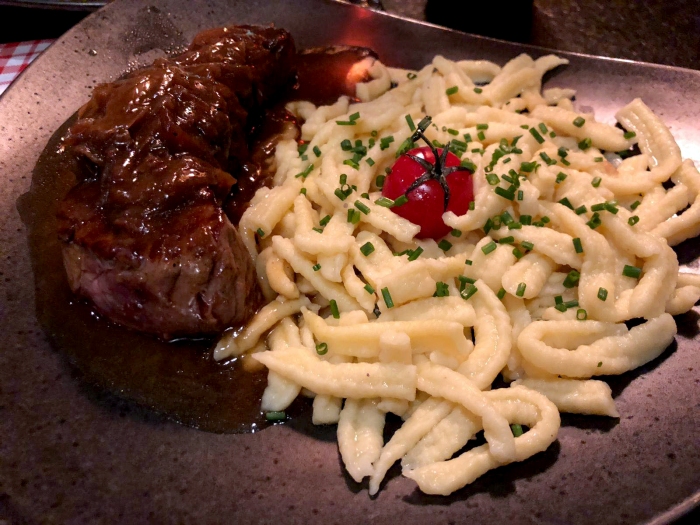 As my main dish I chose the roast beef with spätzle. The meat was slightly tough here and there, but otherwise cooked to a nice medium rare, and served with a tasty onion gravy, as well as caramelized onions over the top. Normally, I prefer my meat with more char on the exterior and without this kind of salty, thick glaze, but on that evening it really did hit the spot. The spätzle was delicious, reminding me a bit of Hungarian nokedli, though slightly lighter in consistency and with a groove running down the middle, adding textural intrigue. These came minimally seasoned but were great when mixed up with the onion gravy. Another simple, hearty treat for us on a rainy night in Stuttgart.

Ben got the Laugenburger, which meant pulled pork and Swabian cabbage between two pretzel buns. I only had a bite of this but that was delicious – sweet, honeyed, soft barbecue pork with the zing and crunch of the cabbage. The pretzel bun was a tad chewy and tough in my opinion but altogether a nice idea.