As the French and Spanish border grew closer on the horizon, I reached nervously towards my bag, where the folded-up results of our PCR tests were tucked neatly between my Hungarian and US passports. Not that I was worried about not getting through. I was more concerned with missing our reservation at Petritegi and our first restaurant experience in 7 months (first meal outside of France for 15). Not wanting to overburden our week-long roadtrip to Galicia with too many set-in-stone plans, I had only booked three places in advance, and this was one of them. I have been wanting to feast on txuleta at a traditional Basque sagardotegia for years, but the best cider houses are all scattered in the hills outside of San Sebastian, and all of my previous trips to this city have been focused on tapas-hopping in the historic center. Plus, I don’t drive and you have to drive to get to a sagardotegia and I have never managed to convince someone to leave the touristy comforts of the capital to explore the lush green landscape that surrounds it. But this time, we were just passing through Donostia on our way to Gijon in Asturias and it was lunchtime, so it worked out perfectly. It was long overdue. 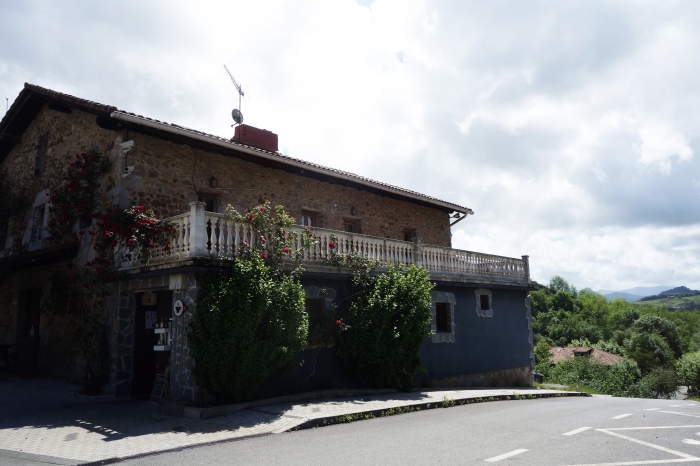 The restaurant is part of a larger complex constructed in the 16th century by a guy from San Sebastian named Petri de Igeldo. The complex also includes a farmhouse with a cider press, space for livestock and a residence for a family. Agapito Goikoetxea purchased the place in the early 20th, eventually passing it down to his son, who left it to his daughter, who left it to her sons Juan Luis and Jose Joaquín Otaño, who passed it down to Joaquin’s son Jokin Otaño and daughter Ainara Otaño. The Otaño family has expanded the business over time, opening foreign markets for the sale of their flagship cider and also producing non-alcoholic apple juice.

All too used to the early lunches and early dinners of France, we arrived as the restaurant was opening (1pm) and thought we’d be alone, unsure whether it was even normal yet in Spain to eat at a restaurant, especially inside, wondering if they were opening the place just for us. Turns out we were really just early, as the place started to fill up with locals, making apparent also the very evident lack of (other) tourists, which would become a kind of theme of this trip. 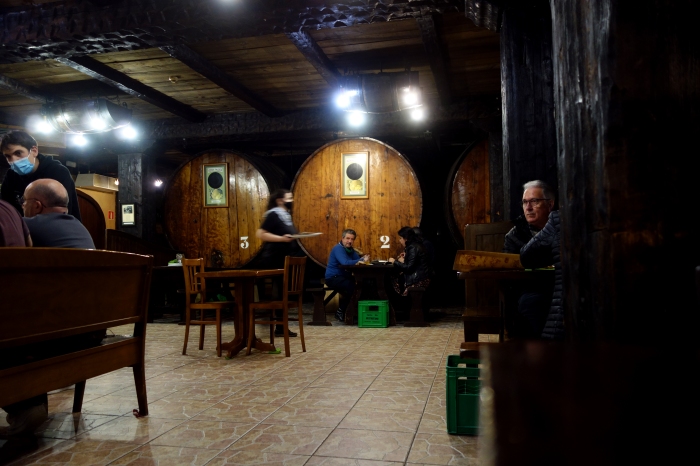 Moments after taking a seat, a pitcher of cider appeared on our table, along with a very long baguette and some chorizo cooked in cider. At Basque cider houses, the cider is traditionally spritzed “txotx-style” from one of the very large barrels in which the liquid ages, directly into your glass with plenty of flare (type “txotx” into Google image search and you’ll see what I mean). Due to COVID regulations this is no longer a thing. For now, the cider is brought out in either a jar or a bottle and it keeps coming unless you ask them to stop. We only went through a jar and a half but local patrons tend to go through several glass bottles, as evidenced by the bright green bottle crates set at the end of each long wooden table.

The cider itself is wonderful, brut and acidic, with flavors of sour apple, citrus and a funky thang from fermentation. Not sticky sweet by any means, this is a very dry cider with very fine bubbles and a crisp texture reminiscent of actually biting into an apple. Alcohol is probably around 7 or 8%. The chorizo was delicious too, plump and tender, its own steaming hot, paprika-seasoned meat juices mixing with the feint fermented funk of the cider. 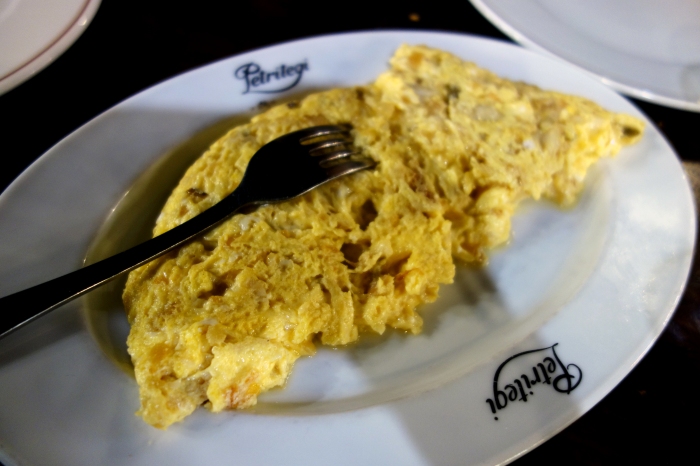 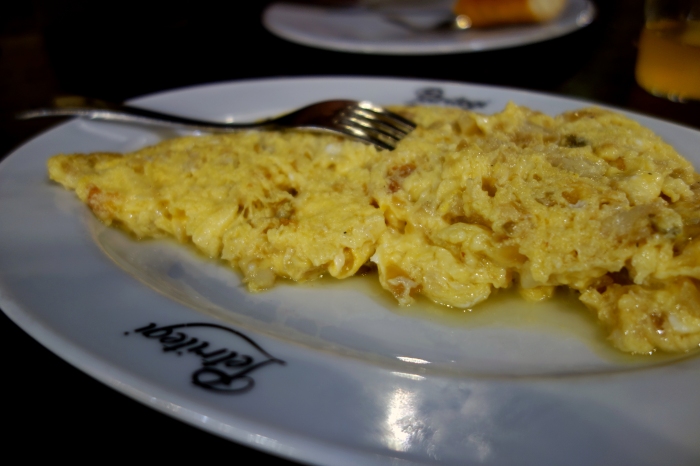 We asked for the typical cider house menu, which started with a fairly generous portion of salt cod omelet, the kind of which dreams are made. Luscious, tender, pleasantly moist egg with the perfect texture buckling over itself. Flaky chunks of meaty salt cod scattered throughout. Eat the tortilla alone or layer it over a piece of bread, wash it down with the cold, dry cider. I tried not to eat my entire half and save space for the beef steak to come. I was unsuccessful. This is a dish that, despite its simplicity, I’m sure I’ll continue to think about for a while longer. I’d try it at home but it’s the kind of recipe that clearly requires a gas stove with much more personality than my emotionless though very consistent vitrocéramique, and one of those thick cast iron skillets that just don’t make sense for the home cook. So for now, this omelet will continue to live on in my dreams, haunting me, and I’m not mad at it. 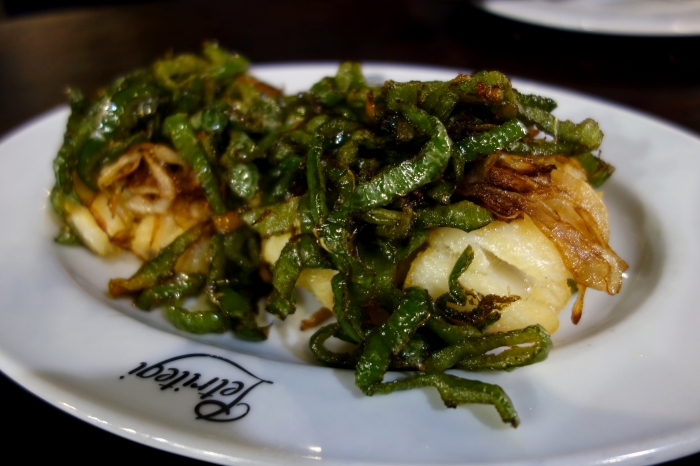 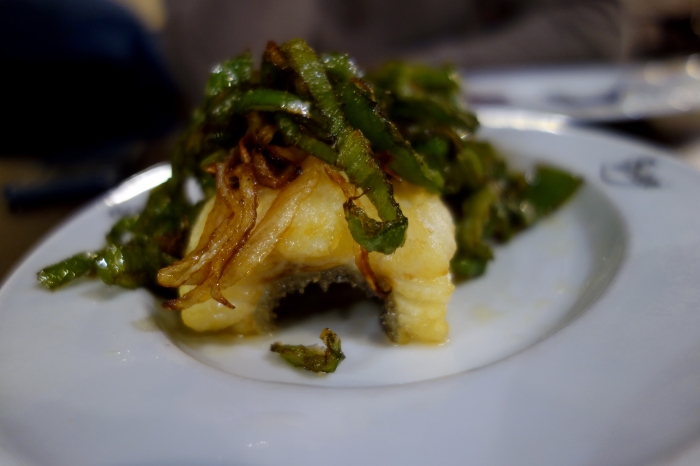 Next came a thick filet of pan-fried cod, served with a large mound of thinly sliced and fried peppers and onions over the top. The fish was wonderfully hearty, falling naturally into its tender white flakes, the beef of the sea. The whole thing was minimally seasoned with only a bit of coarse sea salt sprinkled over the top, the flavors of the golden-brown fish mixing beautifully with the slightly sweet flavor of the caramelized veg. 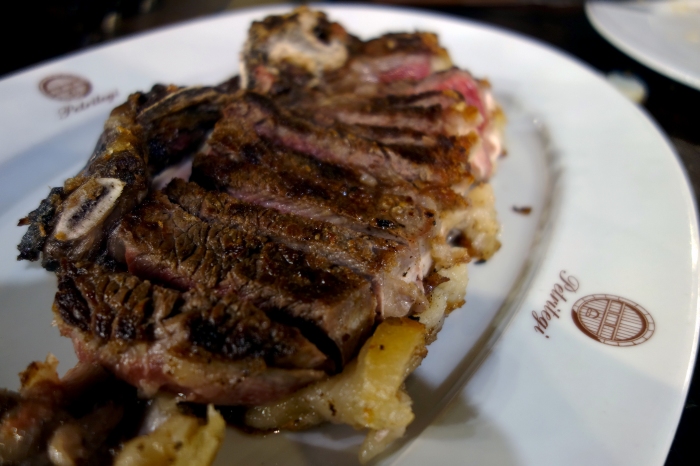 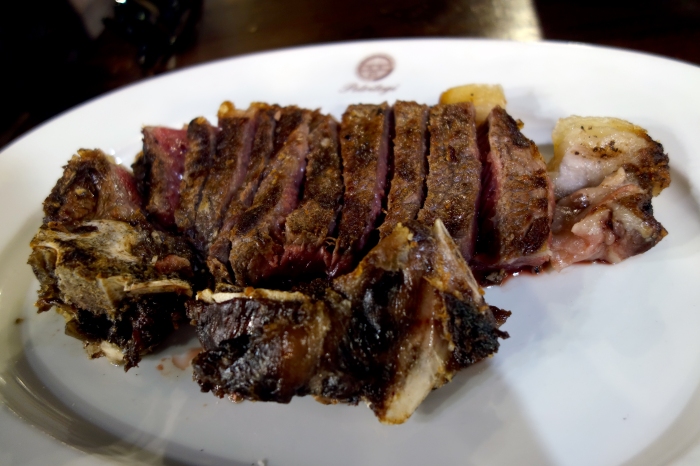 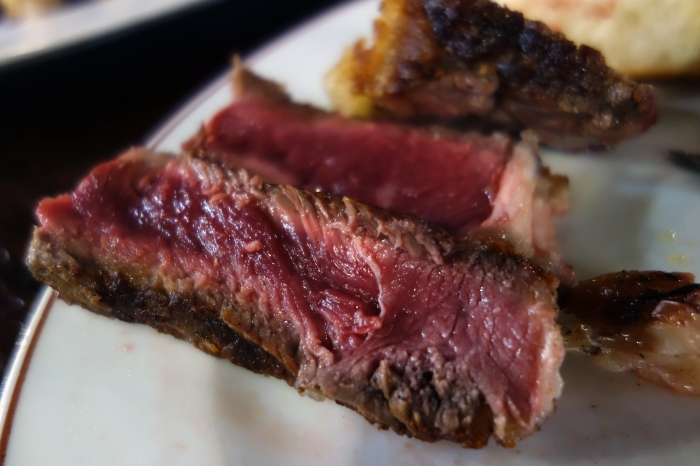 And then came the txuleta, a thick 800 gram bone-in ribeye grilled to a perfect rare over a charcoal grill, which gave it a heavenly, crunchy char. The thing came pre-sliced into easy-to-split pieces and slashing into one was pure joy, as the knife glides right through as if through melting butter. Another dish minimally seasoned with just a bit of coarse sea salt, absolutely perfect with the tart apple cider. 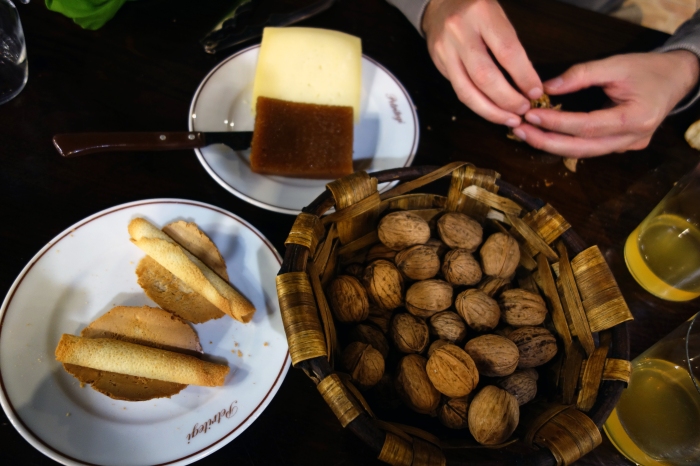 Dessert is a wedge of a local Basque sheep’s milk cheese called Idiazabal, semi-soft and imbued with wonderful nutty aromas, served with a thick wedge of tart quince jam. There is also a basket of walnuts, which complement the cheese perfectly. To enjoy with your coffee they bring some tejas and cigarillos, which are brittle and crunchy butter-based biscuits with some sliced almonds running through them. A very wholesome and cozy ending to the meal for which I only wish I had left a bit more space.

A quick cortado later we were back in the car, off to Gijon with a quick stop in Bilbao. What followed were six wonderful days spent both exploring the new (like cities, beaches, sites we haven’t seen before) and revisiting the familiar comforts of Spain (like full breakfasts with fresh squeezed orange juice for just €3.50, croquetas de jamon, and very strong gin tonics in balloon glasses on a sunny terrace). We were lucky enough to eat (and drink!) well everywhere we went and were treated with plenty of patience and kindness (perhaps because of the lack of stress from the usual influx of tourism). And this classic Basque cider house menu, so heartwarming and comforting, was the ideal beginning to a truly foodie trip.