Ten strangers from around the world stand around a one long table in the courtyard of a riad near the Bahia Palace in Marrakech. In the center of the table, next to me, is Chef Laila, who’s been cooking Moroccan food professionally for over 30 years. Her sous-chef? Another local chef by the name of Yassine and Laila’s husband, who mans a small oven and stove tucked away in a small kitchen. And her band of clumsy commis? Us, tourists from the four corners of the globe hoping to gain insight into Moroccan culture through cuisine.

Chef Laila holds up a some raw chicken thighs and explains how she cleans it, as Yassine translates in English. She scrubbing the meat vigorously with a handful of coarse salt like a kind of exfoliant that removes impurities. She tell us that in Marrakech, each cut of healthy meat bears the stamp of its butcher, an indicator of quality to look for when shopping for these ingredients. As she finished cleaning the chicken, she instructs us to start prepping the veggies. We shred carrots and small local zucchini. We finely chop white onions and cabbage. We pinch leaves of parsley off the stems. 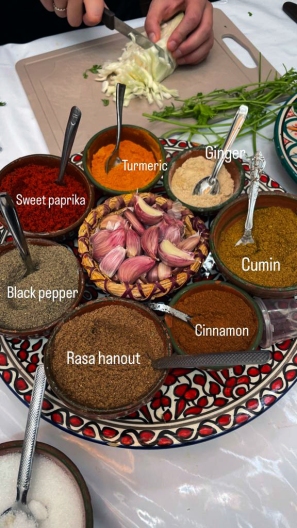 Chef Laila begins to pile chunks of lamb meat into a metal pot and sprinkles it with rasa hanout, a local spice mix which brings together over a dozen spices, whose exact recipe various from one household to the next. The complexity of this woody, earthy, pungent, sweet and heart-warming blend is too much for us to resist. We buy a little baggy of it to bring home at the end of the day. After taking out a few teaspoons, she puts the rammekin of ras back on her colorful platter of spices, next to the sweet paprika, turmeric, ginger, cumin, cinnamon, black pepper and garlic cloves.

These spices are also liberally used to season our shredded vegetables, a colorful mix that will become the stuffing for our vegetarian briouat. After the veggies are sautéed lightly (enough to keep most of their color), they are placed in bowls and the briouat assembly portion of the class begins. Chef Laila takes a stack of warqa dough (a paper-thin pastry similar to phyllo) and peels a single translucent layer off the top. She cuts it into strips and plants a spoonful of dough in the center of one strip, delicately folding the dough around it into a tight little triangle. We take turns trying to do the same but lack the dexterity, producing loose, messy, amorphous packets of filling. Hilarity ensues, as Laila walks around the table, scolding us for our ugly briouats, explaining that if they are not tight enough they will fall apart as they bake.

Once these are done, we lay them into a round tin, brush them with oil and throw them in the oven. When we eventually taste one, we enhale two or three more. The layered dough offers a wonderful crunch, while the tender veggie filling is packed with flavor. We also make meat briouats with ground beef seasoned with garlic and herbs. These are rolled into a cigar shape, significantly easier to prepare. 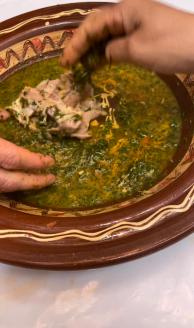 The thoroughly cleaned chicken gets bathed in a little marinade of lemon juice, oil, chopped parsley and coriander before going into a pot with some green olives, diced onions, garlic, ground ginger, turmeric, cumin, pepper and water. And the pièce de résistance of this dish? Some jammy quarters of preserved boussera lemon, packed in salt for 3 years and transformed beyond recognition. I read somewhere that lemons should be preserved for a grand maximum of 6 months, during which time they still maintain their yellow hue. So I’m not sure if these brown, gooey things are even legal, but what is clear is that they have tremendous flavor. They are salty and tangy – sure -, but through this extended aging, they also take on an intense umami flavor. Some slices are added to the chicken mixture, which is left to stew on the nearby stove.

At the same time, the rasa-hanout-rubbed lamb goes into another pot with chopped onion, garlic and a bunch of other spices, among them cinnamon, cumin, ground ginger and pepper. But really it’s that rasa hanout that tangoes loudest with the lamb. At some point, some pitted prunes go in and the tagine is topped with its cone-shaped cover. The dish is sprinkled with toasted white sesame seeds before serving.

We share a table with Yassine, two Swedish backpackers, a Pakistani who lives in London and his mother and sister who flew in from Islamabad. After finishing off the delightfully crunchy briouat, our eyes wander to the stove, from where mouthwatering aromas of tagine waft towards us. 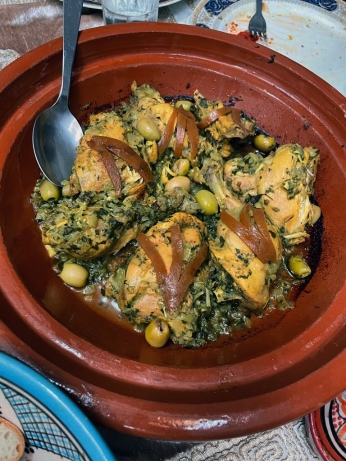 The tagines are brought to the table and their covers removed with much-deserved fanfare to reveal juicy, tender, perfectly cooked stews of chicken and lamb. Both dishes are divine, each representing the best rendition we will probably ever have of these Moroccan classics. The chicken is moist and smooth, covered in the piquant and tangy combination of fragrant herbs, preserved lemon and briny olives. It’s awesome, Ben’s favorite. But I find the lamb and prune tagine to be even more impressive. Thinking of the texture of this lamb makes my mouth water as I write this. It’s so soft, tumbling readily off the bone and melting against the palate, leaving behind its cozy lamb flavor. Its mildly gamy essence is complemented beautifully by the sweet spices and plump prunes, whose sticky syrup mixes with the savory jus of the lamb to form a most luscious sauce. Not a drop of it goes to waste; we sop it up hungrily with the fluffy bread provided. 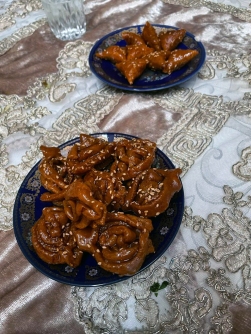 For dessert, we have chebakia – my first experience with this delicious Moroccan pastry. Its made from a dough of toasted and ground sesame seeds, flour, baking powder, egg, butter or olive oil and a touch of yeast. The dough is seasoned with cinnamon, turmeric and saffron, along with a few drops of orange flower water. When the dough is firm, it’s rolled out into a thin sheet and folded into the shape of a rose, then deep fried in oil until golden brown. Sizzling hot out of the fryer, the pastries are then transferred to a pot of hot honey, which gets absorbed into the dough, turning it a beautiful amber color. Once the pastries are completely saturated with honey, they are removed and drained lightly, then sprinkled with toasted sesame seeds. The result is a sticky sweet, crunchy little thing with a wonderful floral touch from the honey and orange blossom water. Chebakia can found all over Marrakech and are definitely a must-try for those with a sweet tooth.

As we gathered around for a photo with Chefs Laila and Yassine, we felt close to them and closer to it all – to Marrakech, to the medina, to the markets and their vendors. A week spent gawking at stuff with the “pigeon eyes” of the tourist had made us weary in a way, tired of being outsiders in such a beautiful place. This cooking class allowed us to relax and let loose, while teaching us more about Moroccan culture than we could have ever learned just touring museums. And in the center of it all was Chef Laila, a genuinely kind and caring individual, the self-proclaimed “mama” of the group and a true pleasure to get to know. Next time in Marrakech, book a class with her at: https://www.airbnb.fr/experiences/1210804?guests=1&adults=1&s=67&unique_share_id=e1098365-b5ec-4341-a8b6-33308baee2ec