Making a reservation at Casa Mun is surrendering yourself to Chef Mun’s world, becoming friends with him on facebook, entering his home, meeting his dogs. The night started out with a champagne reception, my friend and I and 12 other lucky guests gathering and mingling in the hall of the chef’s Palermo/Villa Crespo loft, the ground floor of which has been converted into a elegantly decorated, softly lit dining room. As we got to know our soon to be companions through the upcoming gastronomic journey, as well as the very sweet San Franciscan lady who would help serve our meals and generally take care of us through it, the Chef and his able sous were already busy in the kitchen putting together the finishing touches of the first course. I took a peak into the kitchen to introduce myself to Chef Mun and was greeted with patient kindness and hospitality, despite the lively hustle-and-bustle of the food-prep. 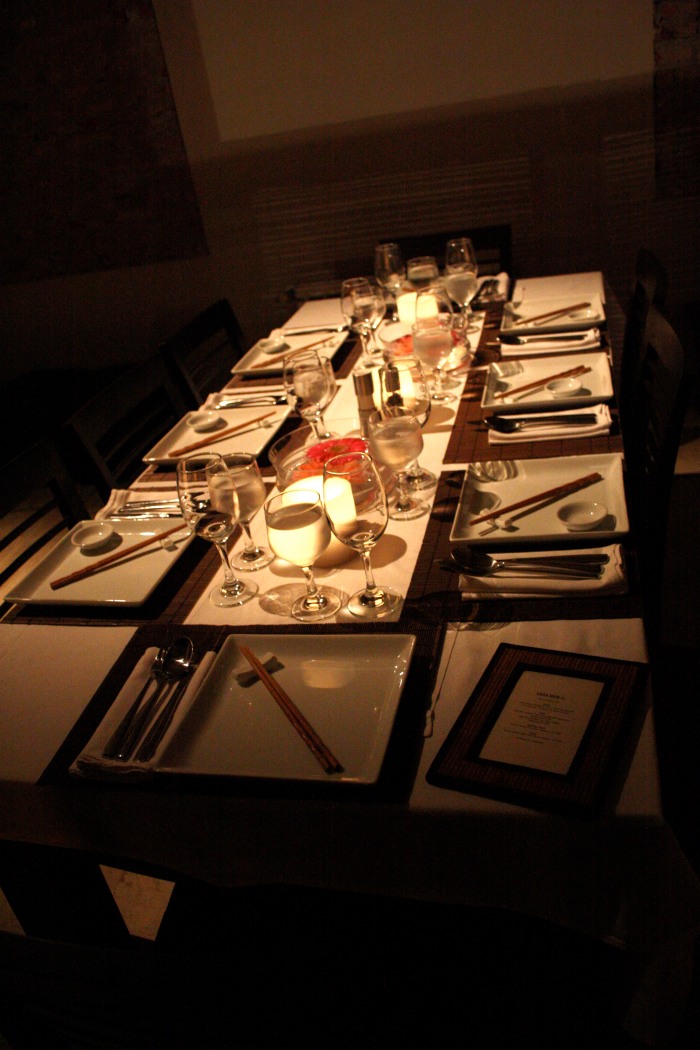 We were seated at two beautifully set tables and greeted by the Chef who introduced himself to us, explaining his background and philosophy. Chef Mun received his formal training at Sushi Chef Institute of Los Angeles with Chef Makota Okuwa (a former challenger on Food Network’s Iron Chef) as his sensei. Having visiting Buenos Aires as a tourist a few times, he was left unimpressed by the rigidity of the beef-centered culinary culture of the porteño and became convinced that such a lively and beautiful city needed a greater variety of Asian cuisine. And this is exactly the challenge that he has so enthusiastically taken on, to gather food-lovers around Buenos Aires, invite them into his home, and present them with a host of Asian and Californian cuisine inspired dishes. He serves up an eclectic mix of sushi, sashimi, dim-sum, bibimbap and Korean BBQ and pairs each dish with the wine that fits it best. Fresh fish is the key ingredient in most of Chef Mun’s inspired dishes, though he sometimes uses pork and chicken. Never beef. He briefly presents each dish, each one noticeably special to him, the idea behind it and the ingredients used. Here are the dishes we had: 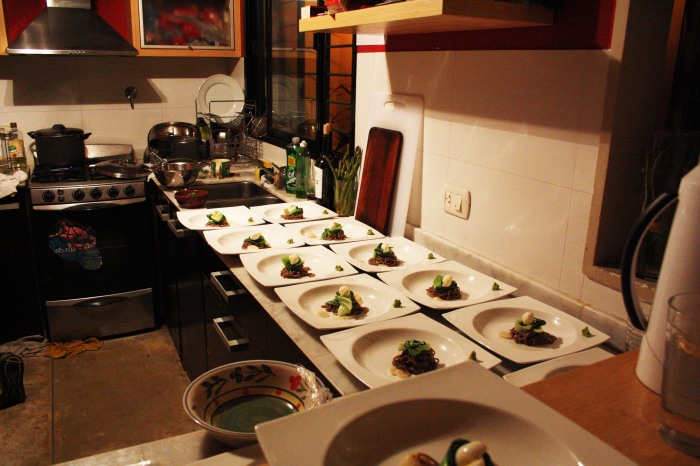 Japanese Soba Noodle Soup: A wonderful start to our 5-course meal. The buckwheat-flour based soba noodles had a perfect soup-noodle texture, soft yet firm, slick and slightly chewy. They contrasted beautifully with the fried golden wonton noodles sprinkled over the top, which gave an exciting crunch to each bite. The shiitaki-mushroom and soy infused broth, to me, was an absolute masterpiece, visually striking in its clear transparency and beautiful red-orange hue, with a deep, earthy-sweet flavor which was woken up suddenly when mixing in some of the prickly wasabi on the side of the plate. The bok-choy gave a fun, slippery yet crunchy-when-bitten-into texture while the halved quail egg balancing on the top provided an intense creaminess with its velvet gold yolk. The bits of water chestnut swimming in the soup gave a crisp freshness that harmonized with the bok choy and contrasted nicely with the rest of the ingredients. 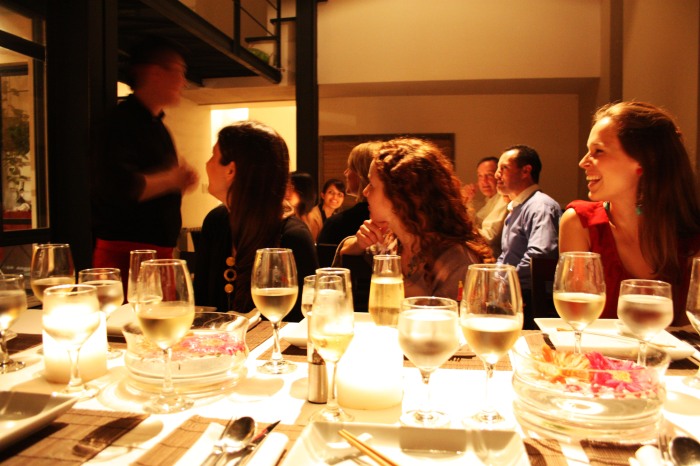 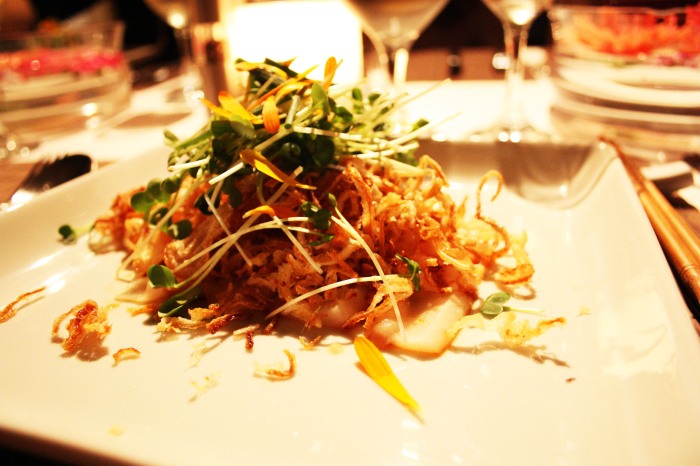 Albacore Sashimi with Crispy Onion: Thin slivers of slightly seared, fresh albacore served sashimi style with a bit of citrusy, tart ponzu sauce over it and a nest of hair-thin crispy fried onion nesting on top. Chives and micro-greens woke up the onions a bit, blended the fried crunch with a green freshness. I treated the fish as a wrapper, curling it around the onions and greens so my tongue would touch the slippery, cool fish first and then the stuff inside. A wonderful blend of textures and flavors. 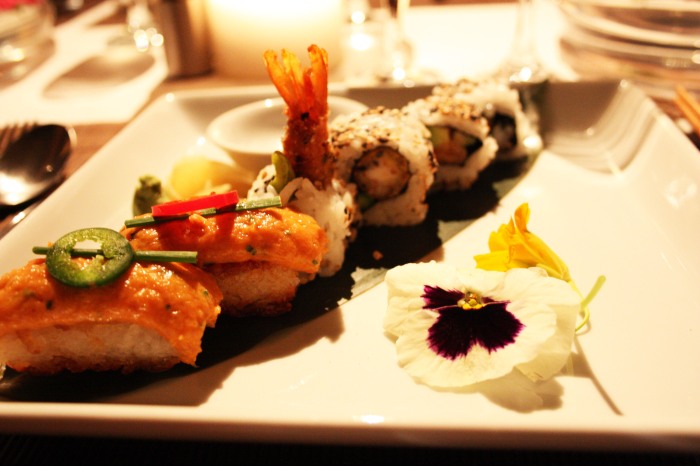 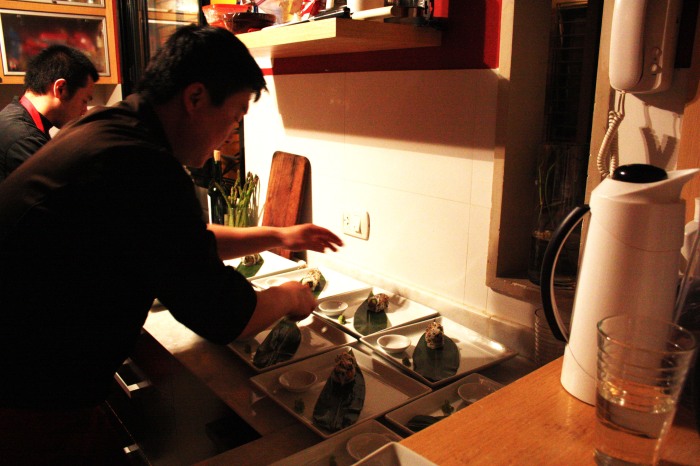 Chilean Salmon & Ecuadorian Shrimp Maki Sushi and Spicy Tuna: No. 3 was by far my favorite dish of the night. The Chef recommended that we eat the sushi from the top-down in ascending order of spiciness. Each little bite-sized lump was packed with flavors which harmonized perfectly and added a tantalizing finish to each mouth-ful. The first got me to concentrate on the simplicity of the core-ingredients, the perfectly cooked rice and the slight nutty flavor and crunch given to it by the bits of sesame mixed in, the paper-thin, stick-to-your tongue seaweed with its subtle briny tones, the airy-light, clean flesh of the Chilean salmon. The firm yet tender chunk of Ecuadorian shrimp in the second added a more complex texture, one with more of a bite to it, yet the soft salmon was still there in the background. The golden-fried shrimp tail joyfully flicking out of the third added yet another texture, a wonderfully rewarding only-slightly-oily crispness which contrasted against the clean flavors of the rice very nicely. The fourth mixed things up; with soft, firm and crunchy out of the way, creamy was now introduced. A sensationally mushy tartar of spicy tuna spread onto a rectangular bed of pan-fried crispy rice, soft on the inside and almost caramelized on the underside. The tuna itself was packed with mild green jalapeno spice which woke up my taste-buds, preparing them for number 5. The final sushi was the climax of the dish, the same creamy spicy toro but with a more intense, red jalapeno spice which made my eyes water slightly and aired out my lymph nodes a bit, but in a comforting way. I noticed a deep and sudden silence spread over the table as we consumed this dish, a silence followed by surprised and elated, knowing glances all around. 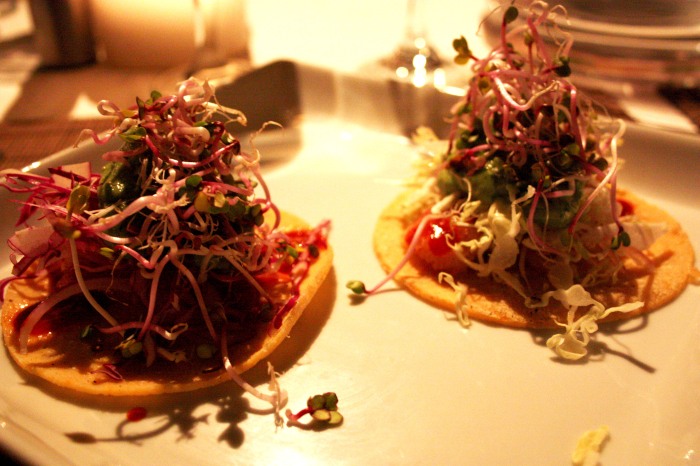 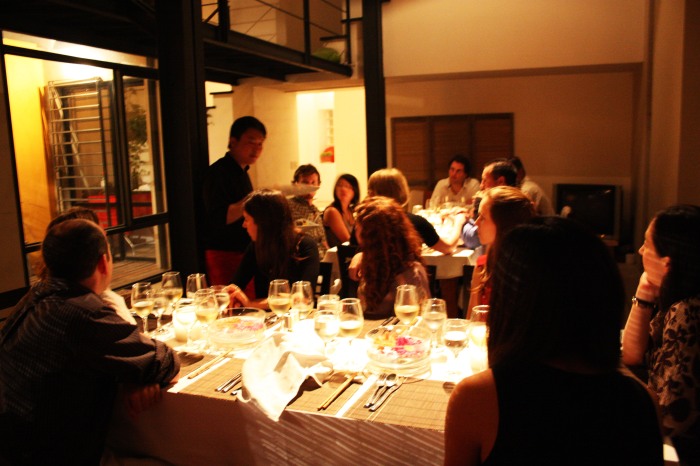 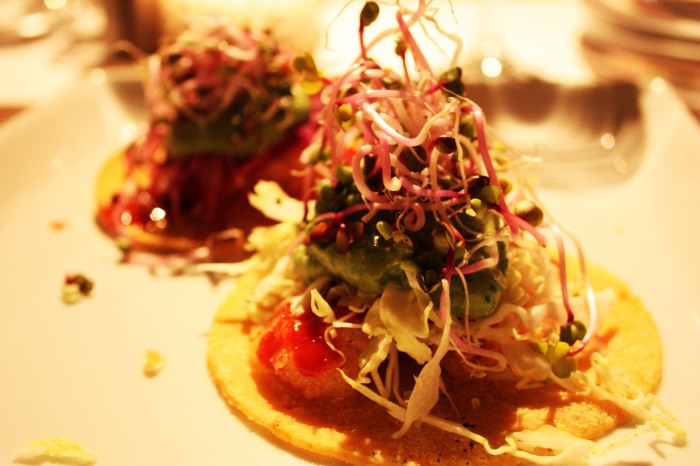 Fiery Fish Tacos: Chunks of Korean-style-BBQed fish drizzled with a bit of spicy, chile-flavored gochujang sauce and doused with sickly sweet and cool cilantro relish. Topped off with crispy, fresh julienned cabbage and a bit of hot jalapeno wasabi guacamole which communicated and harmonized with the cilantro relish across the bed of cabbage beautifully. All this was held up by thin, slightly-grainy corn tortillas. A very complex dish and definitely the funnest one to eat.

Brownie with Dulce de Leche and Italian Merengue: The final course, dessert, an ode to Argentina. A thick, chewy chocolate brownie smeared with creamy sweet dulce de leche and topped off which 3 little dollops of fluffy on the inside, sticky on the outside Italian merengue. Served with vibrant, tart fresh fruit: a bit of chopped mango, a few strawberry halves, some kiwi and blueberries. Served with a clean green tea.