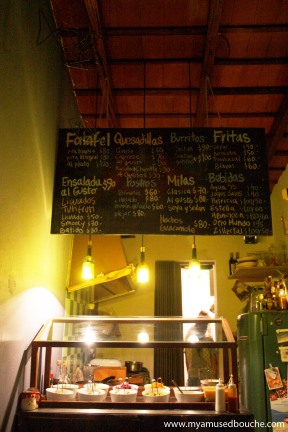 Fa fú is a match-box-sized hole in the wall with a serious cult following, tucked away in a narrow alley in Maldonado. A place for body-conscious surfer bros and overworked Punta suits to get away from overpriced artesanal pastas and greasy milanesas and grab something healthier, cheaper and quicker (fast food–> fa fu, get it?) Humble chalk-board featuring only a handful of options, hovering over a topping-bar bursting with colorful, fresh veggies, tapenades and sauces. Few (but enough) stools facing a thin wall-side bar on the inside, a few more stools lazily strewn around a window-panel bar directly on the outside. Tan youth, fresh and salty from the beach, perched on the hood of their cars parked out front, happy faces buried in over-flowing pita sandwiches. Being from the frigid-rigid Northeast, this is how I’ve always imagined beach-side food joints in much of California to be – laid back, healthy, cool. 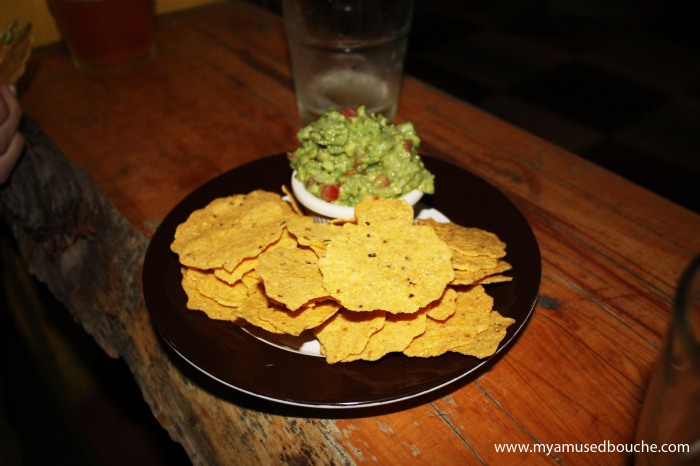 Nachos with guacamole was a great starter to share, one that disappeared really quickly. Corn chips were thin and crispy, allowing the chunky green, citrusy and refreshing guacamole to shine through. Something to hold you over as the falafels fry… 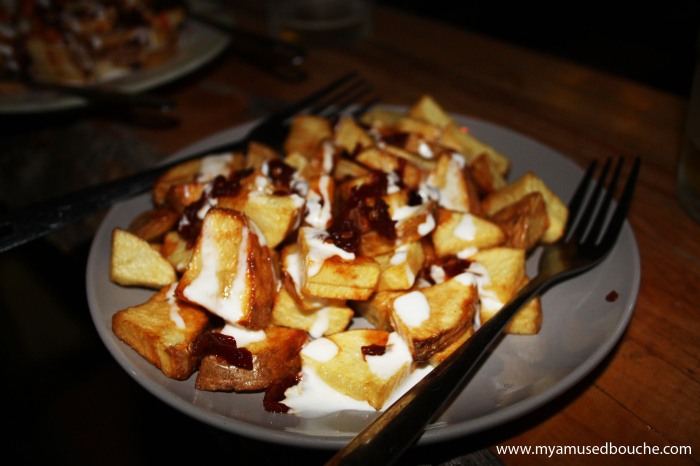 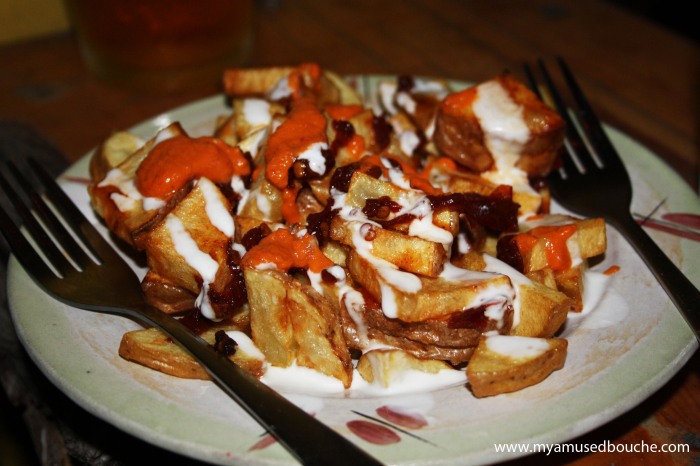 Papas bravas were another great dish to share. Irregular, bite-size chunks of white potato boiled and fried in oil until crispy gold, drizzled with what I recall was a garlicky, slightly citrusy mayonnaise-based aioli (“no spicy”) and a very flavorful vinegary red pepper sauce ([kind of] “spicy”). 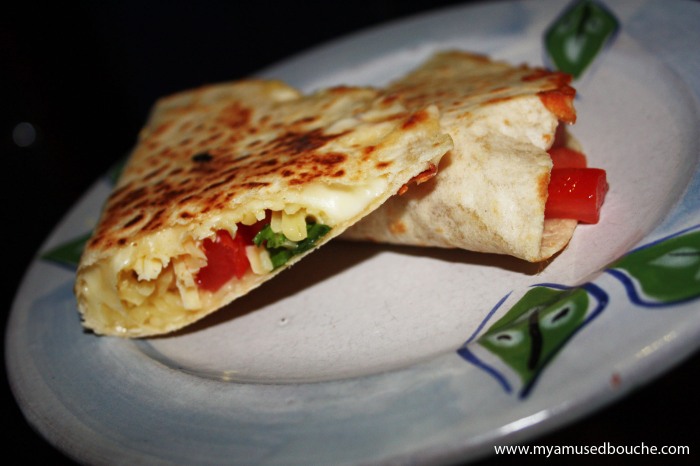 A friend got this capresse quesadilla which, although I did not try, looked very good. Crisp shell, with gooey cheese and bits of tomato poking out. Sick of capresse empanadas… what a great alternative! 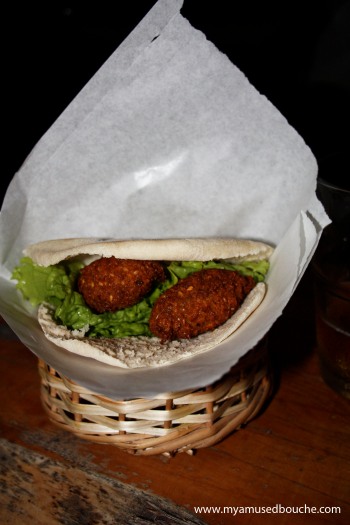 And finally, what we were waiting for – the falafel, fresh out of the frier and sizzling hot. Two delicious rounds of it, loudly crunchy and golden brown on the outside with soft, dense and very comforting chick pea mash on the inside. Served with a little basket inside of a fluffy, gaping white pita (wheat available) and a bit of lettuce. Next, you personalize, adding heaps of all those delicious toppings. 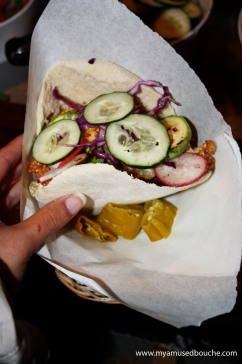 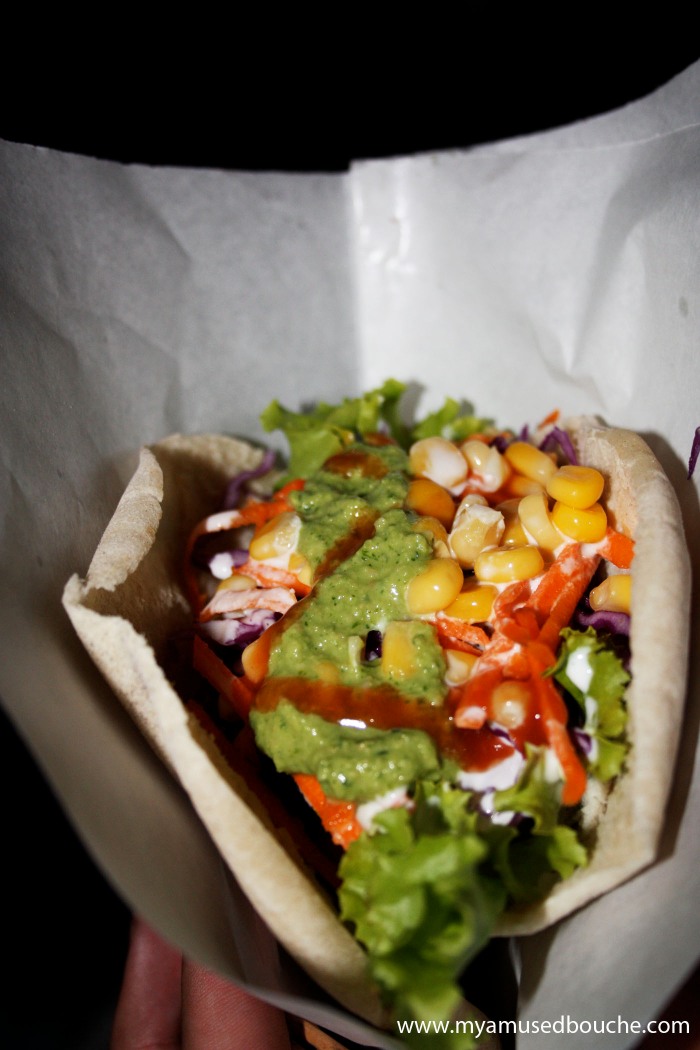 And there are a LOT to choose from: fresh crunchy cucumber and radish slices, grilled zucchini and eggplant, shredded carrots, plump corn, crispy purple cabbage and baked cauliflower, black beans, chick peas, sauteed green beans, chunks of avocado, jalapeno rings and pickled peperoncini. Salsas verde and rojo, more of that garlicky white aioli, thick roasted pepper spread. As I saturated my pita with many spoonfulls of all this good stuff, not-so-sneakily filling not just the sandwich itself  but also the basket around it, the lady working gave me not the slightest look or word of judgement but a smile instead. Biting into my customized pocket, and experiencing on my tongue the rendezvous between the oily, comforting, nutty, warm falafel and all those refreshingly cold and crisp veggies…well, it was pretty alright. Don’t share one of these, that’s just stupid. 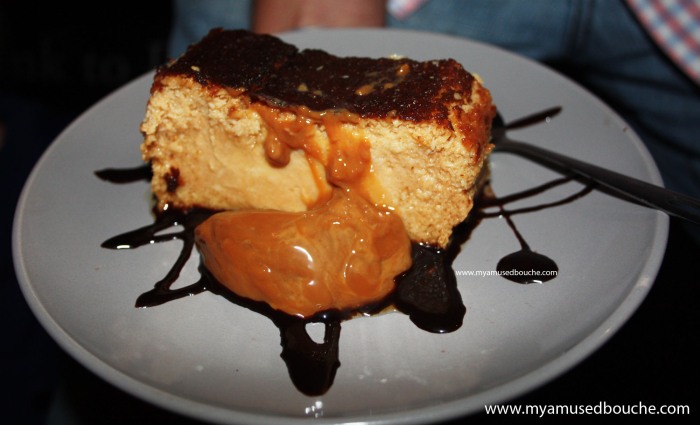 I don’t even really know why I decided to get dessert, as I was already more than satisfied by the time that last juicy corner of pita disappeared down my throat. Maybe it was because I was just not done with the place yet, and needed to see all it can offer. So, hopelessly uncool in going against the grab-a-quick-small-bite etiquette of the place, I convinced my stuffed companions to share two desserts with me. One of them was this guy – called a budin de cielo (“heaven pudding”, or something similar)- which, frankly, I had to get just because of that name. Lord, was it delicious. An airy, light, spongy coconut flan, caramelized and crisped at the top, drizzled with very dark chocolate sauce (contrasting its naive sweetness very well) and served with a side of enough icky-sticky dulce de leche to take a quick bath in. 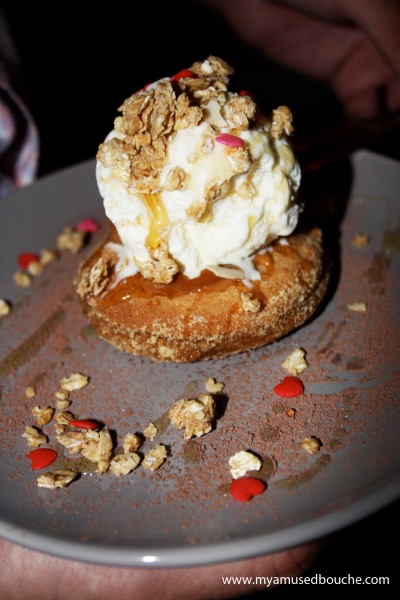 My second dessert choice also had much to do with nomenclature (clever way to raise curiosity among customers, I’ll say), something called pkjor cannot go unordered. A breaded and fried cake (or was it a brownie?) topped with a giant scoop of smooth vanilla ice cream, drizzled with honey and sprinkled with bits of granola, coconut and tiny little candy hearts. Dusted with cocoa powder. Tasted as good as it looked.