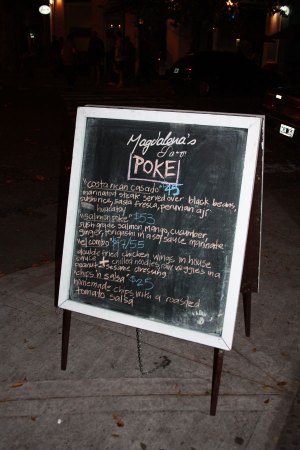 Pretty much since I’ve moved here I’ve been hearing all over town about this Poke guy and the fantastic (recently) weekly pop-ups he does at Magdalena’s Party. As I have been trying nowadays to go to all those places I’ve only eyed from afar, last Wednesday I decided to finally try out his stuff. As expected, I was not let down. Inspired by the wonderful diversity of street food, ranging from Pacific Coast Japan and Thailand to the islands of Hawai and Costa Rica and on to Central and South America, his dishes are super flavorful, texturally complex and some mouthfuls are even actually spicy! Order choice is limited to four dishes, making the selection process much easier and allowing the Chef to concentrate on and perfect each plate offered. Food is served on tapas-sized plates in small-plates portions which makes them the perfect late-night treat when out for drinks with friends. Overall this was a great experience and I will definitely be going back for more soon! After all, the menu changes weekly…

The Costa Rican Casado was a wonderful choice. Bite-sized chunks of marinated steak, marked with a definite hint of ginger and chiles, piled atop a cylindrical patty of sticky sushi rice which sits in a warm bath of plump black beans chillin in their own starchy black jus. The meat is topped off with fresh shreds of lettuce, chopped tomato and onion. A bit of aji adds significant spice to the dish while Peruvian huacatay adds a nice terragony/minty freshness.

His double-fried chicken wings/drumsticks are also wonderful. Crunchy, perfectly golden brown and relatively thin batter encasing tender and juicy dark meat. The light sauce drizzled over the top and sitting under the chicken, ready to be dipped into, was delicious. A subtle caramel-like sweetness, a bit more fresh ginger, hint of soy or something equally smokey/savory. There could have been a tad more of the sauce (in a separate bowl) because after the first bite I not only wanted to douse each wing in the stuff, but fill my pool with and swim in the stuff. 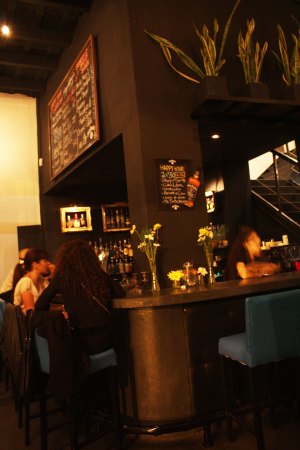 And the composer of this wonderful orchestra of flavor? A very creative and knowledgeable San Franciscan Chef, with an Asian, African-American and Latin culinary background, who, when asked about his travels and inspirations, will go into a passionate rant about the differences in street-food chicken preparation in Pacific coast and Atlantic coast Central American countries. Understandably maintaining secrecy around his recipes but noticeably eager to discuss individual ingredients and techniques, chatting with him about his dishes made me appreciate them even more.

Also…Happy hour 12-12 is a great thing. Two copas of 2011 Fin del Mundo Malbec, not the best but for $15 pesos each definitely better than what I expected. Rapid and very kind service typical of Magdalena’s. Could not have asked for a better Wednesday night in BA, nor could I recommend one.

One thought on “Wednesday Night Poke Night at Magdalena’s Party”