….on a Rooftop in Hong Kong

The past few days I’ve had a pretty difficult decision to make: go to the Philippines or not. On the one hand, I don’t have much to do this week, it’s only around $250 roundtrip to get there and I’ve heard some wonderful things about the country in general and Cebu/Boracay specifically. On the other hand, it is my LAST week in Hong Kong, I have to say bye to my friends, my dad is in town, the weather in the Philippines is far from perfect, and I’m going to Shanghai/Suzhou this Saturday, followed by 1 very busy and expensive last night in Hong Kong, then a 27 hour flight back to Argentina and finally a 13 hour flight back to Boston. I decided it might be a better idea to stay put and use my last week to check some stuff off my Hong Kong to-do list. I also realized that the #1 thing I regretted about not being able to go to the Philippines is that I wouldn’t get to try balut, the boiled fertilized duck egg that I’ve read is a very popular street food snack in Cebu. I realized that finding this delicacy in Hong Kong and indulging in it would ease my regret about not going on the trip. 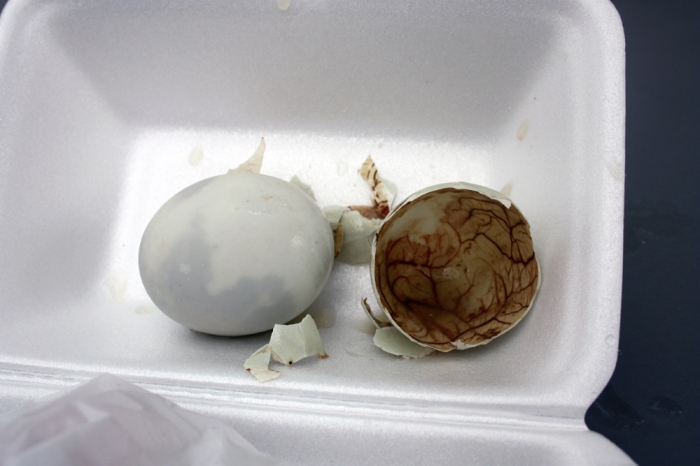 So I consulted a Filipino friend of mine here in Hong Kong and he agreed to take me through World-Wide House, a 3-story shopping center packed with small kiosks and shops run by Filipinos, selling stuff from their homeland. Knowing where to find balut wasn’t exactly obvious and without my friend there I probably wouldn’t have found them at all. A small grocery store on the 2nd floor has them tucked away on the lowest shelf of a refrigerator. You must ask for them and ask also that they boil them, a process that takes 4 minutes or so, just enough time to browse and check out all the crazy seasoned pork rind chips and sauces and funky coconut desserts in the store. The balut was around 6 HKD (so around 0.80 USD) a piece. We got 2 each. We also visited a stall that sold spring rolls, all types of fish and pork and veggie bits in different sauces. I had previously visited this place on my first weekend in Hong Kong but had no idea it was Filipino. I left it up to my friend to order and surprise me with some good stuff. 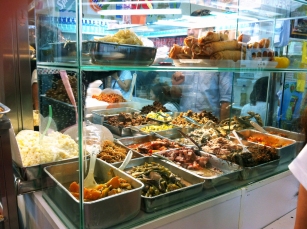 Trying balut was definitely an interesting process and I only regret not having the chili, garlic, vinegar and salt that the snack is usually seasoned with in the Philippines to make it more savory and less like a biology lab assignment. It first needs to be cracked on the rounded side and rid of a tiny bit of shell. It was pretty exciting to do this and to already see that the inside was solidified and veiny, definitely something I had never seen in person before. I was worried that something had gotten lost in translation and that, thinking a Western chick like me wouldn’t be happy with a solidified embryo, the shop lady had given me a 1-2 year old instead of the ideal 17 year old. But no… it was the real deal.

The second step is sipping out the jus, the duck broth, the sabaw. Although I may not look like it in the photo below, this was the part that to me was perhaps the most traumatizing part. I kept thinking that the grayish broth probably contains the body fluids of the growing fetus and so I was expecting it to taste a bit like urine and tears as I swallowed it. It actually tasted okay, however, a bit like a chicken soup, packed with the essence of the animal itself, but maybe a tad murky to be completely comfortable to swallow. It was here that the vinegar or chilis or even just salt, I imagine, would have helped out. These condiments could have perhaps elevated the juice to a more complex, put-together flavor, making it a bit less reminiscent of clear Formaldehyde in a Petri dish.

After sucking out the allantoic fluid, I continued cracking the egg all around and removed the very thin foil covering the yolk. I peeled all around until a very dense little wet mass plopped out into my hand. It consisted of a yellowish white, custardy yet crumbly egg yolk, connected to a slippery soft, feathery black mass, which was the fetus itself. Below this was also a slightly hardened layer off egg white, which my friend warned me not to eat, but I ate anyway. The thing was covered with the wet broth and small maroon veins branching around.

I actually think the juice and the process of sucking the egg out as a whole would be completely fine for the Western palate. I think most of what my kind would have a problem with is unwrapping that little feathery black mass attached to the yolk and seeing this… Anatomy. A tiny little bird with a fully formed little head (complete with eye sockets, eyes, and a little pink beak) wrapped into a ball with fully formed little feet bent up. The feathers are also quite developed, slippery and wet, incredibly soft and downy, not dry or tickling at all. And yeah, working up the gall to pick up the thing and place it gingerly into your mouth headfirst is daunting when you see it separated out like this right before. I ate my first one, yolk-fetus-and-all, in one bite without dissecting it, and only on the second one did my morbid scientific curiosity take over. And while that was fun and all, eating the fetus after seeing it like this was a bit like working yourself up to jump off a cliff. A rush of adrenaline during and a sense of fulfillment upon completion but a bit upsetting altogether. For those with a slightly weaker stomach, I recommend sticking a spoon into the egg, mixing and crushing everything in there and stirring in a bit of those condiments, until you’ve got yourself all of those unrecognizable but still there balut body parts with different textures and flavors sticking out.

Anyway, the balut (eaten whole without dissecting…) was overall pretty great and unlike anything I’ve had before. My favorite part was undoubtedly the yolk, which had a much more intense and pungent eggy flavor than a hard boiled egg, and a velvety smooth, creamy texture, a bit like that of uni or foie. The fetus was slippery and soft, the feathered slicked to one direction by the juice, and with a very delicate crunch from the thin, barely solidified bones. The whole thing kind of melted together and tasted like a creamy egg-drop chicken soup with bits of very tender chicken inside. The bottom part was a bit tough and rubbery indeed, a bit like very overcooked squid, with no particular flavor of its own. I definitely would not recommend the thing to be eaten cold, but warmed up like this, even without condiments, it was not bad at all. I ate one. And then I ate another. ‘Nuff said.

Along with the balut, we also got some delicious menudo (front) and tocino (back) on rice to calm the gut a bit and to make sure the fertilized embryos weren’t rolling around in there alone. Both were very well seasoned, sweet and salty and delicious. Menudo is a Philippine stew with chunky strips of fatty, slightly chewy but mostly tender pork, carrot, tomato, potato slices, onions and garlic in a rich tomato-based sauce, flavored also with vinegar, a bit of soy sauce and something citric to bring it around to a fruity side. It’s absolutely packed with flavor and the acidity of the sauce lightens the fattiness of the pork very nicely. The sauce also soaks into the rice lying below the stew and makes it nice and moist and tomatoey. The boiled veggies add a nice hearty texture to balance the gummy softness of the pork. Tocino is bacon made of pork belly which is sliced into very thin strips and cured in sugar, salt, water, and then marinated in pineapple juice, soy sauce, black pepper and garlic mixture and fried. It is a tiny bit chewy and gummy, a bit tougher than the bacon I’m used to, but it is very rich in flavor, sweet and slightly acidic. The pineapple juice makes it deliciously fruitu without being too sweet. Perfect on a bed of rice.

Overall, a very successful conquest. I would’ve loved to spend my second to last week in Asia toasting up on one of the world’s most beautiful beaches, while a friendly local brought me platefuls of lechon. But, well, sometimes life throws you rainclouds. I’m still very happy to have been able to try some authentically Filipino food here in Hong Kong. I only really travel to eat anyway…