The other night I was wandering around Jordan with my dad, Ladies’ Marketing and showing off the bartering skills I recently perfected (no really…perfected) in Shenzhen when we both got kind of hungry. As always with my dad, we were looking for local and weird. We found one of those two at a place called DimDimSum Dim Dum Specialty Store on Man Ying street. A poster boasting it’s recently granted status of “World’s 101 Best Places to Eat” by Newsweek, along with a picture of Tony and a line from Ekkebus who had eaten there, pulled us in. The place was pretty cool, relatively small and cozy with fast service. The concept here is traditional dim sum classics served up quickly to a young, hip crowd, without the white linen fuss. Surprisingly, prices aren’t that much higher because of the clean and cool decor – one small plate goes for around 20-25 HKD (2-3 USD) and most are served up in traditional steamer baskets. A few things about the service were a tad upsetting. One napkin costs 2 HKD. There is no cold water at the restaurant, which I desperately needed after burning the roof of my mouth on the first greedy, impatient bite of pork knuckle. The waiter refused to exchange our steamed vegetables (lettuce…) for the more expensive stuffed eggplant, which resulted in a whole plate of lettuce going to waste. But anyway…This blog is about food, not service. So let’s get to it…

Rice Flour Rolls with BBQ Pork – Slippery, moist and thin rice noodle wrapped around piquant, slightly sweet char siu, served with a bit of sweet soy sauce. Unfortunately, the thing went cold by the time I was done photographing it (it goes cold fast), but was still very good. The wrapper was just thin enough to hold the filling in, and was a great consistency, very soft and translucent, not rubbery at all. The BBQ pork inside was nicely seasoned, with a deep roasted flavor and sweetness from the honey, 5-spice and hoisin it was prepared in. There were a few tiny bits of meat that were a tad too tough for me and required maybe 1 chew too many, but that’s if I’m being very picky. Otherwise this was a perfect way to start the meal and remains one of my favorite dim sum items.

Pork Knuckle and Ginger Stew – This one was probably one of my favorites of the night. It is meant to help mothers physically recover after a painful childbirth and regain the calcium lost during the pregnancy. It’s also just plain delicious. Fatty, soft skin and chewy, tender tendons between the thick bones of a pork knuckle, slow cooked in warm sweetened black vinegar, PACKED…but really, PACKED…. with big chunks of extra-zesty and refreshingly pungent ginger root. A hard boiled egg is thrown in there for good measure as well. What is genius about this dish is that the sweet vinegar seeps into the meat and the fresh zest of the ginger wakes up the skin, getting rid of that slippery, fatty flavor while maintaining the pleasant, chewy texture. The egg is kind of nice too, especially when broken up. The hard boiled and solidified yolk mixes into the vinegar, dissolving a bit and thus thickening the liquid a bit in the most natural of ways. 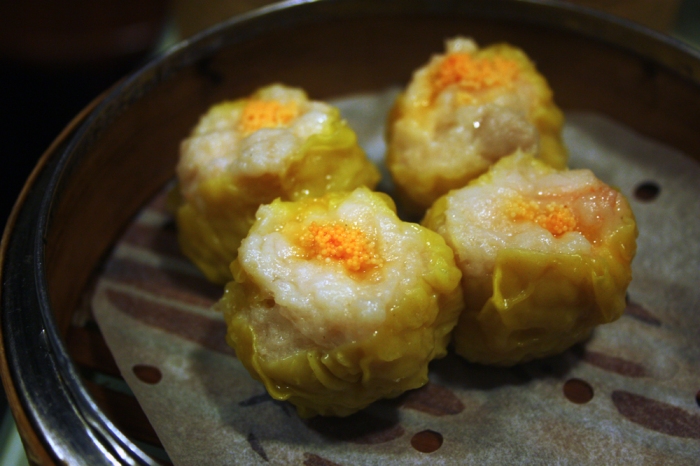 Pork Siu Mai with Crabs Egg – This wasn’t particularly amazing, especially for having been recommended by Ekkebus as one of the top things to try here, but it wasn’t bad. The shumai just wasn’t all that much better than the street variety… except maybe in that they were asymmetrical and all slightly different in shape, which implies that they were handmade and not defrosted. Steamed Cantonese-style ground pork dumpling, flavored with onion and a bit of ginger, wrapped in a smooth, bright yellow sheet of unlevened lye dough and topped off with a little orange mound of crab roe. The pork filling was gummy and chewy as usual, similar to a steamed pork ball on a stick. The wrapper was a little dry and the roe didn’t have a very strong flavor at all – mostly just a bubbly, moist texture. A traditional dim sum fave, but I’d skip this one here and go for the other more adventurous house specialties. 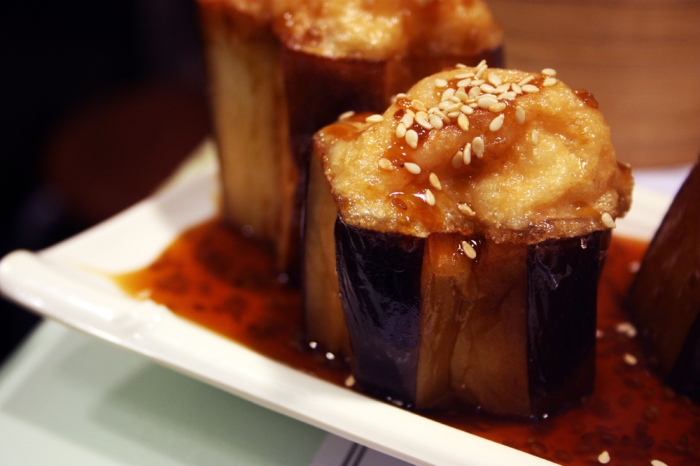 Fried Stuffed Eggplant – Sweet, very tender little Japanese eggplants topped off with some minced fish filling and fried all together. Served with a wonderful sweet sesame syrup at the base. I’m crazy about anything involving eggplant, so I was pretty happy this was on the menu and, especially, that Ekkebus recommended it as a must-have specialty of the place. The funny thing is I’ve seen this at street food stalls all over Mongkok, but it always look a bit too oily and so I decide against it. This one had no excess oil. The flesh of the eggplant was beautifully soft and mushy but still firm enough, not overcooked. The seeds on the inside were slippery smooth and the meat of the vegetable was packed with that special smokey eggplant flavor I love so much. The minced fish stuffing didn’t have a particularly fishy flavor, but was mainly there to add a nice gummy texture to the vegetable. The sweet, nutty sesame sauce complemented the flavors of the eggplant very nicely, while adding a nice cool, slick texture to each bite. 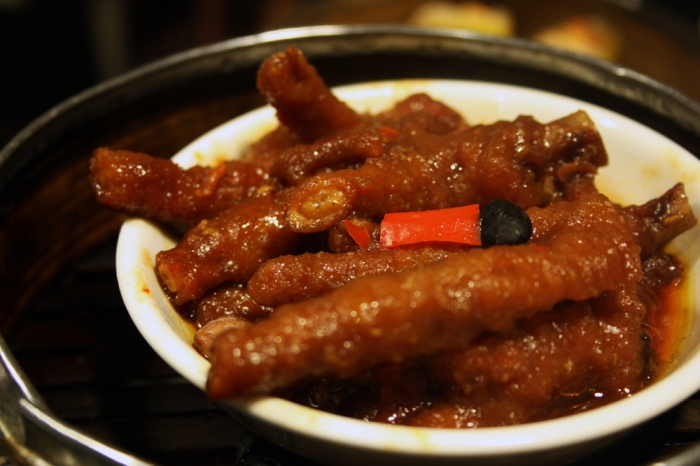 Chicken Feet with Soya Sauce – These were okay, but not my favorite as I’ve had better chicken feet in Hong Kong and even in my soups in Hungary and some Chinese restaurants in Boston. The stuff was nice and chunky but a bit overcooked for my taste, as the meat (if you can call that deliciously soft, puffy and cartilaginous bit of skin hanging off softened but crunchy bones meat) was a bit too loose for me and did not have enough of a bite. The sweet soy sauce, flavored with cloves, peppercorn, garlic, chili, (I think) a bit of cinnamon and a few peanuts boiled in was quite nice but a tiny bit too sweet and autumnal for me, as I prefer sucking on savory feet. I think I’ll stick to ones bathed in abalone sauce from now on. 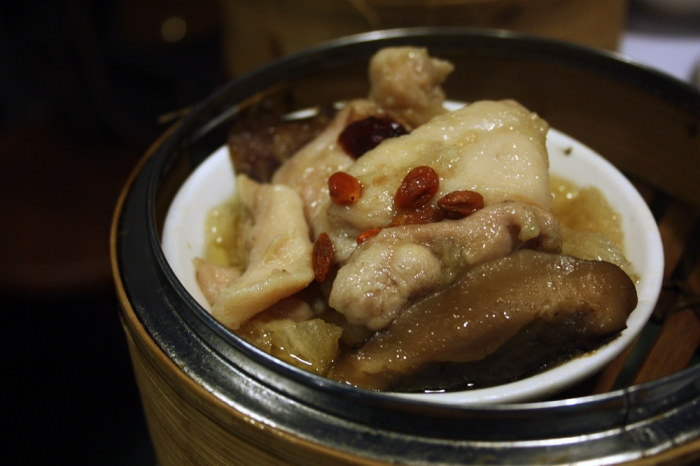 Steamed Fish Maw and Chicken with Chinese Medicine – This dish, known in China for its numerous health benefits, was a pretty interesting combination of textures. The fish maw (swim bladder) was incredibly delicate, yet not falling apart. The texture is a bit like that of a very thin bubble wrap would be, filled with little pouches of air (or in this case, braising liquid) that burst open when you push the stuff against the roof of your mouth. The maw was served with very tender and moist bits of white-meat chicken and some chewy, gummy dried “northern mushrooms” rehydrated in the braising liquid. The stuff was cooked with a bit of ginseng, some dried and pulverized squid and mussels (for medical uses only) and a few chewy red dates. Each bite of the stuff was clean, flavorful without being too salty, with a combination of delicate flavors from the chicken, the fishy maw and the fungal twang of the mushroom. Definitely a dish to feel good about.

One thought on “DimDimSum Dim Sum Specialty Store in Jordan”