Last weekend, I finally got to take part in the very popular Washington, D.C. brunching trend on a rainy Sunday afternoon with some friends who were visiting me from Boston. I had heard good things said and read good things written about The Coupe, and the online menu looked interesting, so I decided to leave the more famous Busboy and Poets for another time and check out the former instead. We walked up past the Columbia Heights metro station, around 25 minutes or so from my place, and ended up in a cool neighborhood, characterized by a high concentration of what looked like very decent restaurants, cafes and bars. Young adults sitting outside on benches, protected from the rain by big umbrellas, sipping on their various microbrews – grungy but decent, hipster but the tolerable kind, the gourmet kind.

Walking into The Coup, one is initially shocked by the length of the restaurant. The host stand is in the middle, with a little baked goods and coffee counter right behind it, behind which the kitchen starts. The restaurant stretches far both left and right of this center counter, with comfy booths and high tops arranged neatly in a row, but with enough space between them (which they seem to have to spare). There is also a long bar with stools lined up alongside it and this really seems like the perfect place to bring your laptop and do some work while dunking your bran muffin into a nice hot mug of Se Chung Oolong. For breakfast, the kitchen has got it down. There is a large variety of baked stuff (muffins, strudels, buns, coffee cake, croissants), some house-made preserves to slather on these in their toasted or raw form, and a huge variety of hot breakfast specials as well. Most of these hot breakfast options are also available on their late-night menu (served 24 hours!!), along with some other savory classics – burgers, sandies, salads. The brunch menu features a nice mix of egg-y stuff (various combinations of the 4-5 basic American fork-and-knife breakfast items), some more creative brunch-oriented wild cards, lighter salads and lunch/dinner sandwiches. There are quite a few vegetarian, vegan and gluten-free options, for those who are actually selective about what they stuff into their face. Totally by chance, all three of us ended up getting something gluten-free and all three dishes were good. There are also some weirdo appetizers, such as the P.E.I. Mussels in red curry and coconut broth, which I don’t really understand how anyone can stomach before 6pm…but to each their own.

My friends each got a mimosa to start with and I got the Bloody Mary, which was very spicy, with a ton of shaved horseradish floating around and making it almost impossible to gulp down two sips of in a row. But I like extreme flavors, especially in drinks paired with the otherwise very mild meal called brunch. The way I see it, you can either wake up those scrambled eggs with hot sauce on the eggs or you can go ahead and drink the hot sauce in the form of a bloody. Garnished with a stuffed green olive and a celery stick, rimmed with chili salt that added more saltiness than heat, but which was a nice touch visually.

My friend got the Tofu Quiche, which was a perfectly size little tartlet with cremini mushrooms, leeks, onion and creamy smooth silken tofu as its base. The flaky, crumbly, buttery rich crust was made with almond flour and the thing was served with an arugula salad with some cherry tomatoes, chopped red onion and slices of fresh radish. There was also a very vibrantly colored red pepper puree at the base of the plate. Despite my initial doubts, which I held back as I heard my friend order a tofu-anything, this dish ended up being my hands-down favorite of the three, better than my own choice. Sometimes tofu substituting dairy or meat is pretty ridiculous and borderline pathetic, but in this case it worked very well. The tofu maintained the smooth, jiggly texture of an egg and cream based custard filling, but was a tad less rich in flavor. This was made up for, though, by the addition of a ton of rosemary which packed it full of that comforting, forest pine taste which, especially when taken with the crumbly, buttery quiche shell, reminded me of some kind of savory Christmas biscuit. The luscious, butter-soft leeks and onions added to that comforting, smooth flavor of the base, while the mushrooms provided a great chewy texture contrast. The salad matched the quiche in its lightness but added some more vibrant flavors to wake up the palate from its rosemary-scented, buttery cat-nap. My only qualm was that the bright orange pepper puree could have been a bit more concentrated in flavor. As it was, the texture was watery and the flavor too dilute to dress a salad. Nonetheless, a definite top recommendation in D.C. so far for those unfortunate gluten-intolerants out there….You just became a little more fortunate.

My other friend had the Shrimp and Grits, which had grilled shrimp, cubed country ham, asparagus, roasted tomato and bacon jus on a bed of creamy, cheesy grits. I’m sure this wasn’t the restaurant’s intention but the dish is twice as expensive as every other one on the brunch specials menu and this doesn’t really become evident until you get the check and try to remember how many drinks you’ve actually had. So keep an eye out. However, considering it’s one of the only seafood-based dishes on the brunch menu and that they those source it just for this one dish I would say it is worth it and the price makes sense. The shrimp itself is fresh, grilled to a plump, tender texture with the tail left on for some crunch. The ham pairs nicely with the shrimp, reminding me of the whole bacon-wrapped scallop thing (seafood + pork often being a happy marriage). The cubes of ham were salty and smokey, dominating in flavor over the very mildly sweet shrimp but painting its flavor all over the tender, juicy canvas of the latter. Some sweet, slightly charred asparagus added a leafy green flavor and roasted, pruney tomatoes added some much-needed bursts of acidity. The grits itself was creamy, like a pudding, with a ton of butter making it smooth and luscious in flavor. I actually would’ve preferred the grits a bit coarser, like a polenta, to be able to stand up to the proteins topping it instead of just offering a soft bed for them to sink into. The bacon jus made it even softer, almost soggy in some parts, though it also added a great salty, smoked piggy flavor to the dish overall. Gluten intolerants… maybe there is hope for you yet!

Amidst my decision-making process, I asked our waiter what he thought best represented the place and he responded pretty quickly, the Hash Brown Bowl. Then he scribbled down our drink order and took off, leaving me to ponder between this house specialty (which would give me an idea about the concept and overall character of the place) or the much lighter Watermelon Salad with jicama (which I just really wanted, but which I thought was not too representative). For the sake of actually getting to know this neighborhood spot, I ended up ordering the Hash Brown Bowl. As we waited for the food to arrive, I was dreading what I thought it was going to be, a big bowl full of chopped up and fried potatoes, some way too salty bacon and greasy onions thrown in, and a flavorless fried egg cracked messily over the top. What actually came out was small but dense to the point where I could only eat half, but that half left me more satisfied than I suspect that salad would’ve. The hash brown, first of all, was just the way I like it. It reminding me more of a Swiss rösti or Eastern Europeans latka or any type of potato croquette. The potato was shredded, stuck together with butter (and maybe egg yolks), formed into rectangular logs and pan fried until the outside was impossibly crunchy and caramelized and the inside remained soft and “fibrous” from the little shreds of potato. Breaking into these made each bite a pleasure and it was the hardest part of the dish to leave behind once I made the decision to stop eating at full. The hash brown logs were topped and surrounded with soft, sweet, slightly mushy sauteed onions as well as some gummy, thin mushrooms and spicy, tender jalapeno slices, all kind of stuck together with some sharp cheddar cheese. There were also pieces of bacon, adding salt and smoke to the dish, collaborating with the jalapeno to make the dish flavorally interesting. Otherwise, very simple, mild flavors, typical of a brunch classic. The bowl of goodies was topped off with an over-easy egg which was just a tad too dry and stiff for me. I think next time I will request the egg poached, which I asked our waiter about and had confirmed as a doable option. I’d kind of like the yolk to still be wet enough to drip down the rest of the dishes and hydrate the dish a bit, because otherwise everything was a tad too dry for me. Then again, that’s what the Bloody Mary is for… 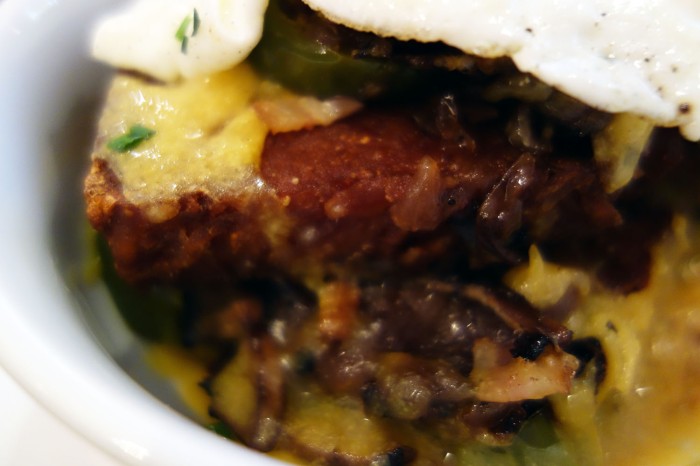 The Coupe is definitely a good place to bring people who come visit in the future and I might try it out sometime as a place to bring my laptop to and do work from. Also, since it is only a few blocks from the Columbia Heights metro, it might be a good place to grab a hearty nightcap after a long night before heading home. The Braised Pork Tostada, for example, might be pretty spectacular in general, but even more so at 3 am… We’ll see. Until then, I will highly recommend The Coupe for its creative, reasonably priced breakfast and brunch options and their eye toward keeping things satisfying, yet healthy.