Things have been odd between my parents and myself in the past few months but a recent trip home to visit them evened things out in my mind just a bit. Conflicts that may have been raised between us were silently settled during a breakfast at Tatte on a sunny Sunday morning in Brookline. The place just felt right for us coffee-pastry noshing Europeans. There were no egg sandwiches or hash browns in sight, only smily, golden brioche clouds, flaky croissants, yeasty “roses.” We ordered a few things to share and took a seat at one of the dainty little wrought-iron tables outside. Perfect for people-watching on Beacon Street while enjoying warm rays of midsummer sun melting against my smiley face.

The interior is cool too. A shelf stacked with brioches greets visitors from the left while a rustic wooden tabletop covered with their signature nut boxes, arranged in an almost annoyingly perfect, neat little way, pulls the eye to the right. A refrigerator stuffed with tarts and cakes draws one in even more to the counter, which is decorated with buttery breakfast pastries. The variety isn’t huge here, they pretty much do like 2-3 types of dough, so the wooden counter isn’t really brimming with color. The dominant golden brown of caramelized, airy pastry is quite enough for me though!

The whole nuclear family unit’s favorite was the savory veggie croissant, which boasted an absurdly buttery, flaky pastry base topped with tangy, smooth patches of goat cheese, roasted eggplant and roasted red peppers. The veggies had softened in the oven to a fork-tender, melt-in-the mouth texture and their natural caramelized sweetness offset the tangy goat cheese perfectly on top of crispy, salty layers of puffed out and blistered croissant dough. My dad gave my mom the good parts, the ones patched up with snow-white cheese. 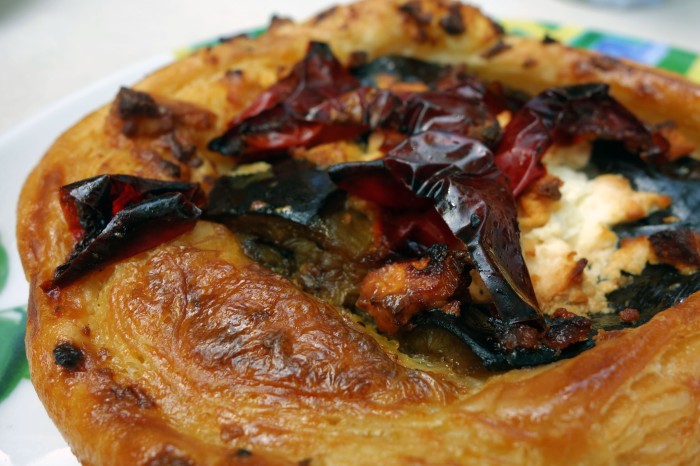 We ordered the Prosciutto sandwich to share halves of as well. The sandwich had prosciutto, goat cheese, a few figs and plenty of arugula served on a French ficelle (anoxic baguette). While the individual ingredients in the sandwich were fantastic, (especially the bread with its perfectly crispy crust and a chewy, soft center), the proportions of the thing were a tad off and this resulted in a sandwich that was a too dry for my taste. The arugula was very fresh and hydrating but there was simply too much of it and too much of the bread. These ended up overpowering both the texture and flavor of the thin prosciutto inside. The meat itself, when pulled out and tasted on its own, was salty with a cured funk, and perfectly juicy in texture, but it unfortunately lost these qualities against the thick yeastiness of the bread and the thick book of arugula. There was also too little goat cheese, whose charismatic tang I only detected in small patches. The goat cheese could’ve hydrated the sandwich more, could’ve tamed the jungle of arugula and could’ve cut the sticky jammy sweetness of the figs with its acidity. No such luck. The figgy sweetness took over a bit too much, further overshadowing the flavors of the prosciutto. Next time I’ll choose the Balkani sandwich (with roasted eggplant, feta cheese, tomatoes, and pesto), as it seems to be the favorite and promises to be quite delicious.

Just to be versatile, we also tried a sweet croissant, which was formed into a precious star shape and topped with plenty of soft vanilla cream cheese. This one wasn’t as impressive as it’s savory, veggie-speckled brother but it was still very satisfying at least in its texture. The floral notes of the vanilla cream cheese didn’t reach too far for me and the cheese ended up being a bit bland for my buds – maybe it’s something for children to enjoy. Another issue was that the cheese filling seemed slightly congealed rather than fluffy and fresh already at 11am. The pastry shell was, however, just as buttery and delicious.

We ended our meal with one of Tatte’s signature Nut Boxes, the almond one specifically. A thick, buttery pie-shell type dough formed into a rectangle and neatly crimped along the sides. This was filled with a gooey, sweet caramel and topped with a heap of slivered almonds which had toasted to achieved smokey flavor. Here again, the proportions were a tad off for my taste with the pie shell being too thick for such a tiny bite. It was undeniably delicious, but a bit tough to bite through in order to get to the nuts. The almonds were also not as crispy as I had expected them to be, perhaps because the caramel added too much moisture to them during the baking process. Maybe a slice of one of the larger nut boxes are the way to go with this signature, so as to not run into the “thickened dough at the corners” problem again.

While I enjoyed my experience at Tatte, I was a bit disappointed by some of the offerings. The bakery, along with its “mother” Tzurit Or, has reached a considerable level of fame. Her cheesecake have been featured in the Dean & Deluca catalogue and the bakery has appeared in articles published in the The New York Times, O (the Oprah Magazine), the Boston Globe, Daily Candy, Edible Boston and Boston Magazine. Her creations have even been showcased on Food Network’s “Unique Sweets.” Although most of the pastries I tried were easy to eat, pleasing to both the eye and the palette, I expected the execution of each item to reach closer to perfection, given the reputation of the place. At this point, any legitimate mom-and-pop bakery in Paris will still win if matched against Tatte.

No matter though! We still had a good time.