At Pier 39 in San Francisco, one can stare at sea lions for only so long. The mind starts to wander, conjuring up images of these happy, chubby creatures ferociously devouring prisoners of Alcatraz who attempt escape by swimming ashore. Or maybe that’s just me… Either way, the unapologetically touristy waterfront rubbed me the wrong way. The Hard Rock Cafes and souvenir shops became a bit too much and I started to crave something real, something not slathered in Jack Daniels sauce. 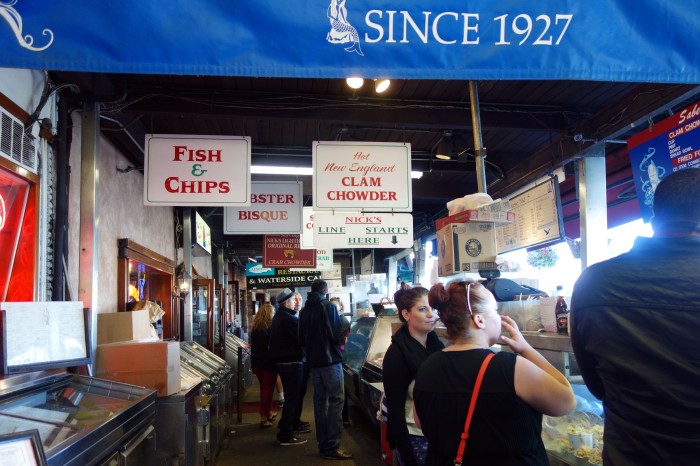 Walking to nearby Fisherman’s Wharf, I spotted a line of seafood restaurants, proudly displaying their fresh-caught products in what seemed like a mutual store-front market which shared the same blue tent cover. Behind refrigerator doors appeared shrimp, crab, lobster and oysters all sold no-fuss style in simple white paper cups. The restaurants inside were surprisingly full of people enjoying the higher variety of menu options (“Slap those shrimp on some linguini, why don’t you? We have a kitchen in the back, after all!”) Apparently the place has been around since the 1920’s. That’s pretty cool.

As my companions and I were craving a beer with our crab, we chose one of these restaurants, Sabella & Torre, at random and, noting the quality of the ginormous Dungeness crabs out front, knew immediately what to order. We sat at the bar to facilitate the process.

Before we could indulge in our crab, we decided to also share a dozen oysters on the half shell for good measure. Briny and delicious, served with a very simple mignotte and some cocktail sauce. They were local from Washington State and our bar guide (and, I think, manager) knew a lot about them. Unfortunately, I don’t remember what type they were exactly because in this case I really was just eating to eat and drinking to drink, paying more attention to conversation and context than flavors and textures. They were, as I remember, quite refreshing and went well with our fizzy post-sightseeing pale ales. 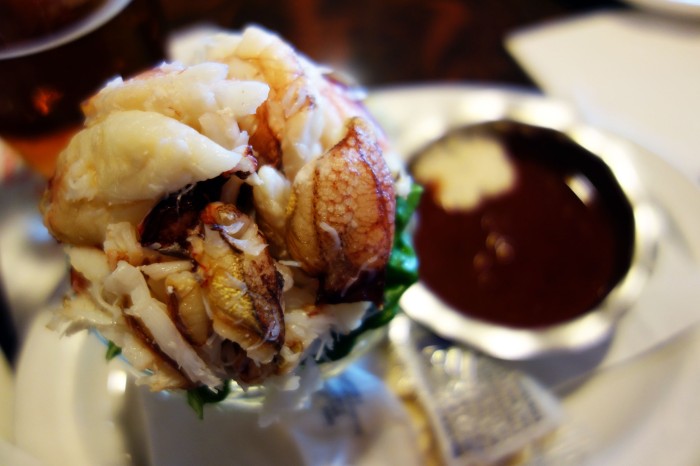 The crab, unfortunately, was a bit of a let down. Sure, the meat was fresh, juicy and sweet, luxuriously plump. It fell apart into moist little fibers like micro-noodles tasting of the sea. But somehow the cups of the stuff out front looked fresher, juicier, sweeter, plumper and generally more “real.” Our version was a “cocktail,” with the meat mounted on a pathetic little stage of lettuce and served with a cocktail sauce that was too thick and sweet to allow the crab to shine. The horseradish garnish was better, but some malt vinegar or other light sauce would’ve been far superior, as it would’ve actually allowed the natural sweetness of the crab to come through.

A good experience either way but next time I’m grabbing a cup o’ crab instead and sitting out by the water to nosh. Hell, I’ll bring a 6-pack too, because public drinking is apparently no big deal in San Fran…