At the beginning of my trip back to the Bee-Ay there was nothing I craved more than the traditional stuff I had subsisted on when I lived there. I wanted steaming hot empanadas, gooey provoleta sprinkled with oregano and the array of steaks and offal that make up any proper Argentine asado. At one point I actually even wanted a milanesa with Quilmes. At another, a thick ham and cheese pizza with faina. These had been everyday staples for me at one point and tasting them brought me back to the first few months as an expat there, when everything was new and exotic and suddenly accessible at a relatively low cost. But as the novelty of these things wore off I began to crave what I had left behind: sushi without cream cheese, burgers that weren’t overcooked, salads with more than 3 ingredients, craft IPA, mozzarella that was actually mozzarella and not some fake-ass provolone passed off as such. It was around this time that I met LP, a talented caterer and pop-up chef who introduced me to the culinary network within the expat community. There was a worldly chap who made heavenly double-fried chicken wings on Wednesday nights, and a Korean-born fellow who blended pan-Asian and California cuisine to make beautiful arrays of maki at his very successful puerta cerrada. There was even a yanki who dared to coarse-grind his burger meat to make fluffy, juicy patties and stick these between house-made brioche buns. And LP? She had single-handedly brought the cuisine of her native New Orleans to Buenos Aires in the form of fried fish po’boys and muffalettas. She also made a mean black bean and chorizo sope. She now runs her very own Creole-Mexican puerta cerrada in a beautiful space in Palermo and is embarking on a project to convert it into a brick and mortar gastropub with 5 styles of her novio’s awesome craft beer (Broeder’s) on tap. Needless to say, she’s doing well. 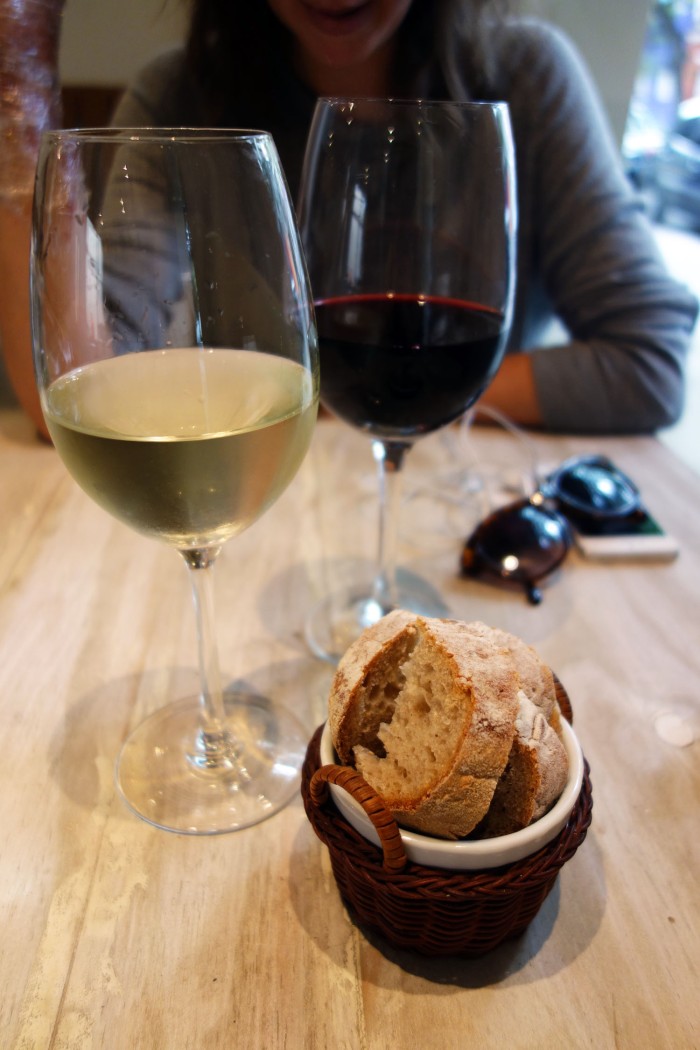 I caught up with her recently and asked her to pick the place. She’s kind of always been my “fixer” when it comes to the non-traditional in Buenos Aires and this time was no different. She recommended Pain et Vin, a cozy neighborhood vinoteca that opened recently in August of 2013 and which she promised was her new favorite spot in Palermo. “I’m obsessed.” It is run by sommelier Eleonora and her Israeli lovah Ohad who is the master of the wood-burning oven, of which they happened to have one. While Eleonora helps customers select the perfect palate from her carefully assembles collection of wines, Ohad cranks out a variety of daily-fresh loaves. This includes country-style, wheat, rye as well as olive and nut loaves. I’ve heard he also makes a mean croissant, which I will have to see to believe. Boules, batards and bloomers are proudly displayed over the counter and sold whole as they would be in a bakery. They also use the bread for wine tastings and to make a modest selection of sandwiches.

The space itself is very pleasant, with a minimalist simplicity and plenty of charm. White-washed walls, straight lines and a healthy dose of sunlight. A small outdoor patio with a single wrought iron table and two chairs provides an intimate nook, while a long wooden communal table makes social wine-tastings and larger parties possible. There is also a dining room with creamy white wooden tables and chairs facing either the counter and kitchen or the handsome shelf of Argentine “cult” wines. 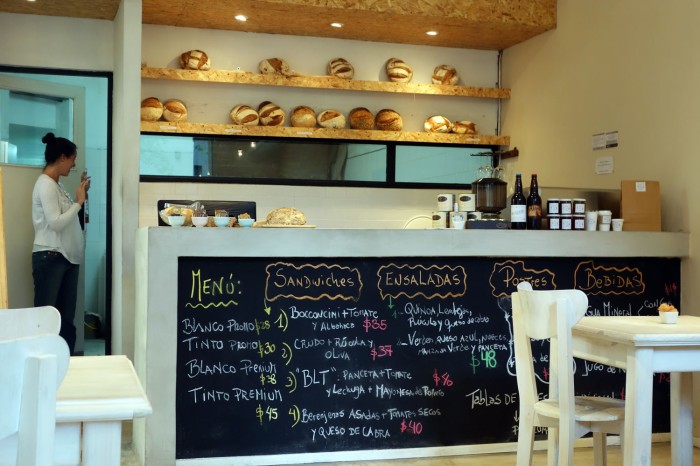 We ordered a glass of wine – a Fin del Mundo Newen Torrontes for me and some sort of crazy red blend for her. Out came a little basket of P+V’s signature sourdough cut into bite-sized chunks, along with a ramekin of golden olive oil to dip into. The mantra of simplicity rings clear. The place is about freshly baked bread and carefully curated, local wine. In other words, the basics. I can honestly state that this combination matched with good company would’ve been enough for me to stay for hours. When we eventually glanced over to the menu, chalked up against the wall of the counter, I was happy to see that it was rather limited. There are 4 sandwiches and 2 salads, some dessert and drinks. LP told me flat out, “The BLT or the eggplant with sun-dried tomato and goat cheese. Or the quinoa salad is good too.” As a fellow writer of restaurant reviews, she understand my need to try not just any old thing but the dish a restaurant is most well known for. No signature burgers at a seafood joint, in other words. No bacon-wrapped dates and no Cobb salads anywhere. She pushed the BLT with my article in mind. Although perhaps picking the signature out of 6 menu items is not that challenging to begin with. 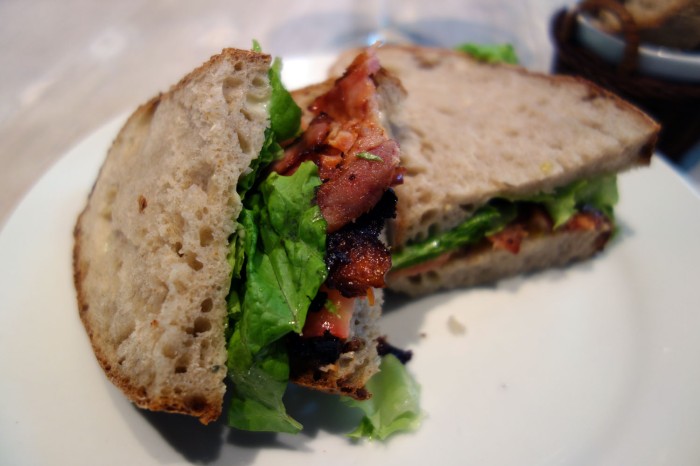 True to the name of the restaurant, the bread really shone through in each bite. It was present not just as textural support for the bacon but as a lead character. A rough, flour-dusted crust arched over chewy, soft and slightly spongy flesh. It was porous and airy but had a rich flavor, tangy like sourdough with a mild olive essence. The fluffy bread soaked up the housemade rosemary mayonnaise, which was whipped up and fluffy like an aioli. The spread had a wonderful herbal depth that went nicely with the martini-twang of the dough. I actually would’ve preferred sunny tarragon to autumnal rosemary, but it worked well with the salty, smoky panceta (not pancetta, just “bacon” in castellano argentino), whose bits of excess grease blended with the mayo and added extra luxury to it. There were both thick and thinner slices of bacon, fantastically crispy and brittle rather than chewy. Fresh-enough lettuce balanced out the toasty warm piggy meat, as did juicy tomato sliced not too thick, nor too thin. It was a simple but very satisfying sandwich which appeased my hunger but did not weigh me down for the day.

My friend ordered a good looking Quinoa-Lentil Salad with arugula and a pinched off bundle of goat cheese. I did not try this one but it looked earthy, fresh and bright. A good choice for vegetarians on a hot summer day.

My BLT had cost only $40 pesos, which is roughly $4USD. This is quite a deal in Buenos Aires where average pay is significantly lower than in the US, yet “artesanal” sandwiches still tend to go for around 10 bucks. And these sandwiches are generally either weighed down by monstrous hunks of lomo or too light to satisfy the typical yanqui, as in the case of the $1 “de miga.” Pain et Vin’s crunchy, crusty country loaf was the perfect medium to project a lunch on. It was also a pretty solid sourdough in a city largely devoid of sourdoughs. I understood easily why this place had become one of her favorites. Tranqui atmosphere, buena onda owners, a good variety of wine and fresh baked bread.  On point again, NOLAChef.

One thought on “Gringas Eating Sourdough at Pain et Vin”