I’ve been hungover in a variety of cities and have learned the perfect local cure in a handful of them. In Chile it’s a plate of chorrillana. In Hong Kong it’s a mango puree in Mongkok and char siu bao from the closest bakery. In Argentina it’s choripán. I’ve serenaded this thing, referring to it as the “king of Argentine street-food gastronomy” both when they were still a novelty (and I misspelled their name) and after they had become a staple of my diet. On my recent trip back to BsAs I woke up with a raging headache and, knowing exactly what I would need to get rid of it, I told my companion, “It’s gonna need to be a chori this morning.” Argentines have a built-in carrito GPS similar to the Dunkin Donuts GPS Bostonians are born with. Five minutes later I was following his order with “Lo mismo,” and five minutes after that the thing was warming the palm of my hands. Just moments after my first bite I felt like a human being once again, for better or for worse. 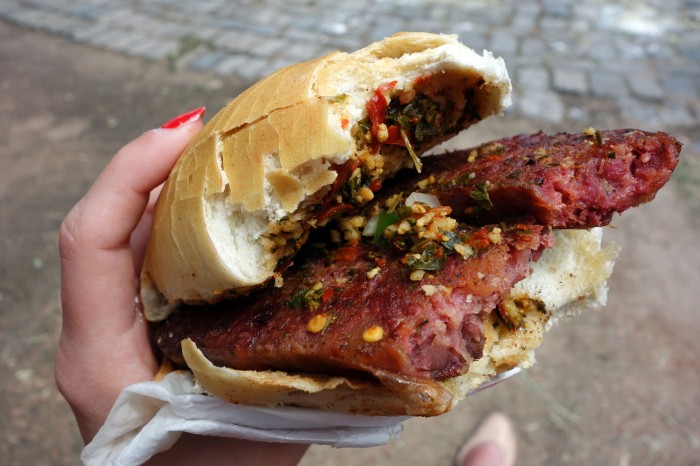 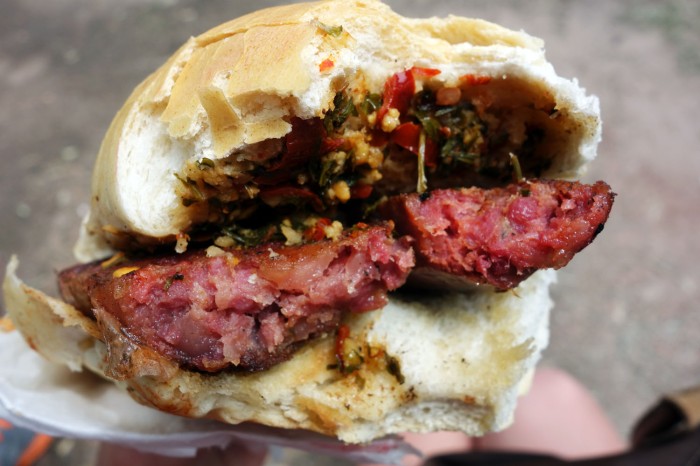 Get it anywhere, really, any carrito in any park in Palermo or any feria. Ignore the ketchup, the mayo and the salsa golf and go for the chimi. Ladle it on thick with the little white plastic spoon, as much oil as solid herb. Personally I prefer putting the sauce on the sliced side of the top bun, allowing the garlicky and tart stuff to soak into the soft flesh of the bread so that it can hydrate each bite and provide plenty of flavor. The sausage is savory, smoky from the grill and only very slightly spicy. It is split in half before being stuck between buns, which increases the surface area but which also takes away the pleasure of biting into it whole and popping the natural casing with your teeth. Nevertheless, there is plenty of meaty juice gushing out with each bite, mixing with the flavors of the chimichurri.

The choripán is its own category of Super Food, blessed with the power to soak up excess booze late at night and calm the stomach hours after. It’s been a life save more than often.