On a recent excursion to Priorat wine country I acted the tour guide for my mother and my man. I lead them to the little cottage in the mountains of Montsant, which I had called home for close to six months. We walked through the town of Poboleda and had a beer on the terrace of ye olde La Venta. I had selected Clos Dominic with its dangerously steep slopes, century-old bush vines and pint-sized barrel room as the vineyard to tour, as to me it’s one of the most representative producers in the region. The winery brought us to Porrera, the Priotari town that has always been my personal favorite. It was only natural for our gang to lunch at La Cooperativa, the town’s most oeno-centric and beloved eatery.

Just across the picturesque little footbridge from Porrera’s Plaça Catalunya, La Cooperative serves traditional, grandma-style Catalan food in a wonderfully homey and comfortable dining room whose red and white checkered tablecloths and scattered pots of dandelion make one nostalgic for the family meals of childhood. The large room towards the back once housed the cooperative’s bread oven, but has since been converted into a wine tasting area. A lady named Mia runs the kitchen, recreating classic dishes using recipes from her grandmother’s cookbook with light touches of Mediterranean fusion here and there. There are soups, salads and light plates to start. These are followed by hearty, individual entrees usually consisting of a single piece of meat cooked well with no flimsy garnishes or sides. It’s real food, not tapas; it’s meant to eat, not pick at. Front of house is managed by an impossibly charismatic and attentive dude named Litus, who treats each group with the type of genuine kindness and familiarity I’ve grown to long for in the cold, customer-unfriendly dining scene of Barcelona. Litus is a knowledgable and patient guide through the restaurant’s beautiful wine collection, a list that seems to include all the major D.O.Q. Priorat and D.O. Montsant labels at very close to their original, cellar-set retail prices (rather than at the 300% markup to be found in Barcelona restaurants and wine bars). Litus is a walking, talking, floral-shirt-sporting encyclopedia of these local labels; he seems ready to spend as much time as necessary to answer questions and help patrons find the ideal wine to match their meal. Plus, he’s just generally such a positive dude, really a joy to talk to.

As our tasting later that afternoon would feature plenty of bold, alcohol-laden reds, I chose Litus’s last bottle of Nelin 2012, a 100% White Grenache from Clos Mogador that I grew especially fond of while living in Priorat. It had been the only local white wine clean and light enough for me to really enjoy on a dry, hot summer afternoon. We also ordered a bright, fresh salad with figs and goat cheese to go start. 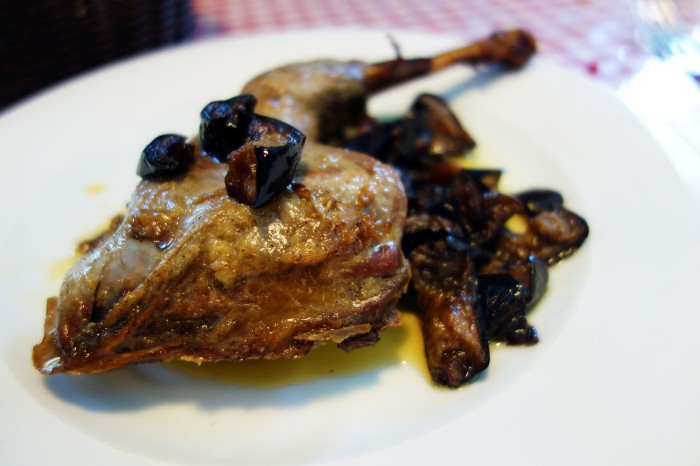 The pintada with eggplant was a satisfying and homey plate of food that reminded me of being in my grandmother’s kitchen in Hungary. A shapely leg of local guinea hen is properly roasted to the point where it falls to lean shreds when sliced into. The salty, fatty skin draped over the meat shrivels and shrinks into a single crispy chip of caramelised poultry flavor. It slips readily off the steaming hot flesh. The flavor of the meat is deep, slightly gamier than that of chicken. The birds is seasoned minimally with salt, pepper, and a pinch of smokey paprika (another reminder of home). Served on the side is a small mound of eggplant, cubed and roasted to a silky, smooth consistency.

And then there’s the partridge, briefly sautéed for color before being poached in a broth of water, local white wine, vinegar, oil from the town of Siurana and some sweet vi ranci (“rancid wine”) typical of the region. The broth, which also serves as the bird’s marinade, is seasoned with bay leaf, garlic and maybe clove or nutmeg for a touch of autumnal comfort. The meat is tender, the skin elastic and tight. It’s a wonderfully light dish with very mild flavors and a very subtle boozy hint from the fortified wine. 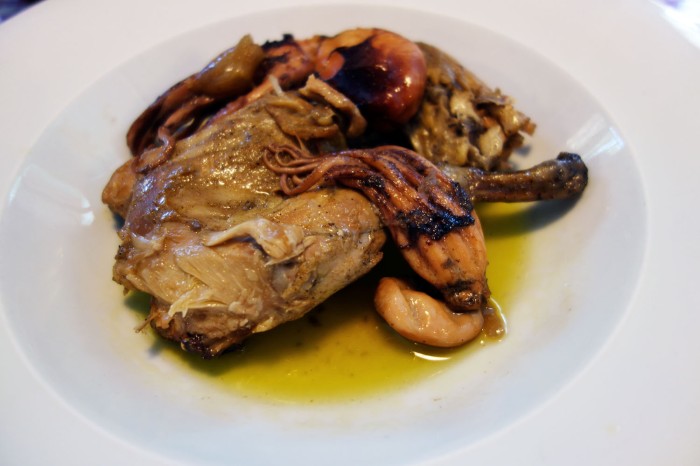 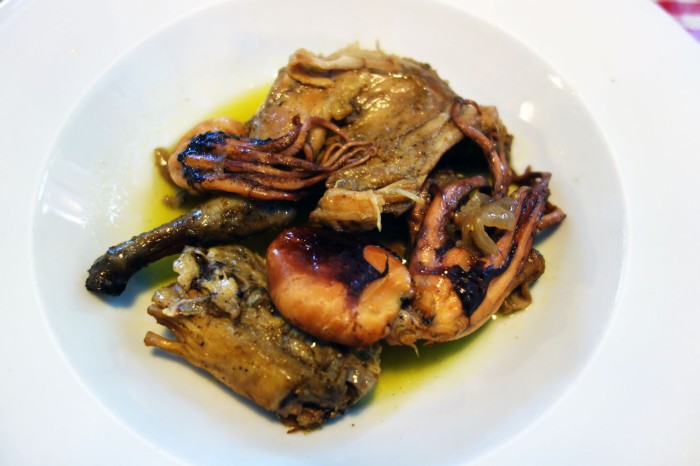 At La Cooperativa I’ve always ordered the Conill amb Popets, a weird and wonderful dish that unites rabbit and baby octopus in what is the perfect example of Catalan surf ‘n’ turf. In fact, “mar i muntanya” (sea and mountain) is a very popular category within Catalan cuisine, one that highlights the region’s geographical diversity by combining marine and alpine ingredients on a single plate. Common examples include pollastre amb llagosta (chicken + lobster), bacallà amb butifarra (cod + pork sausage), cabra amb cargols (goat + snails), peus de porc amb cloïsses (pig trotter + clams) and a dozen paella-type rice or noodle dishes with sausage, chicken, clams and prawns. Proteins from land and sea cook together so that their flavors merge, with white wine generally serving as catalyst. In this case the result is quite nice. The briny funk of the octopus, sourced from nearby Ametlla de Mar in the province of Tarragona, dominates the mild sweetness of the rabbit, whose juicy and moist lumps of flesh soak up the latter flavor and provide the perfect canvas upon which to project it. It’s a bizarre sight though, to say the least. Curlicued tentacles stretch lazily over the broad walls of tender bunny flesh, while the chewier bulbs of octopus “head” nestle to nap in the meat’s nooks and crannies. A bright yellow pool of Siurana olive oil collects at the bottom of the bowl. There are no sides or garnishes to distract from the unlikely marriage of the two ingredients and the reaction that this union brings out in the eater. A mound of peppered mushrooms or perhaps a nice cream sauce would’ve maybe made this dish easier to look at and to eat. Nevertheless, I found both ingredients perfectly cooked and, in the end, very satisfying.

For dessert I ordered a 30 year old vi ranci (“rancid wine”), Arrels de Priorat, which happens to be the region’s only sweet wine to have earned a 100-point rating by Robert Parker. It’s packed with wonderfully deep, cozy notes of honey, nuts, dried apricots and prunes. While I’m sure the desserts at La Cooperative are delicious, the aroma alone of this wine is enough to end the meal on a sweet note.

Lunch in Priorat, especially Sunday lunch, is a very important meal, a two or three or four hour affair that brings together family and often involves more than a few bottles of wine. Planning any trip to the region should start with first making a lunch reservation in one of the towns; the rest of the afternoon kind of falls in place after. In the town of Porrera I know of no place more fit for that leisurely lunch than La Cooperativa. Traditional rural fare made with love and attention meets the best the local vine has to offer.