We left the rincón gastronómico area of the Mercado Central de Abastos satisfied but sure that the snacking portion of our culinary journey had come to an end. It was time to find a nice plaza and a restaurant terrace to sit in, with proper wine service and more substantial plates to share. It was, after all, lunchtime. 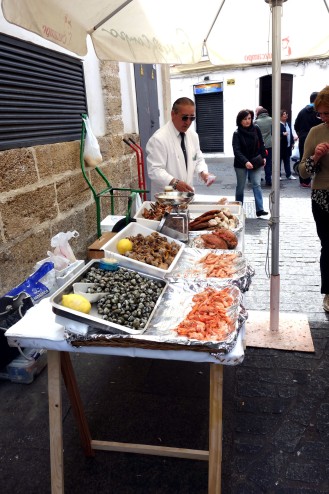 But after walking out the main gate and turning the corner, we discovered Plaza Libertad, a long street with folks selling ready-to-eat seafood and some stuff you might have missed in the massive seafood market inside – cockles, sea snails, crab claws, lobster, shrimp, oysters, etc.

This one guy in a white coat was especially loud about what he was carrying, calling people over to try his stuff. I had previously heard that Cádiz is the shrimp Mecca of Spain so I moseyed over and was easily convinced to buy a cone of tiny shrimp, his most popular item, for €1.50.

These shrimp, of the species Palaemon longirostris, are native of southwest Spain and quite difficult to find outside the province of Cádiz. They are only about 3 cm long and light pink in color, with shells that are so thin that they can be eaten whole. The shrimps are not de-shelled or cleaned before cooking and they are most commonly consumed boiled as a snack or fried up in a batter of chickpea flour (tortillitas de camarones).

With their slippery smooth carapaces these little guys are quite difficult to grab onto without causing them to tumble out of their cone. They´re very sweet in flavor and have juicy, elastic flesh with no noticeable trace of sharp shell or stringy legs getting in the way. Overall, they were delightful to eat, but I would´ve been happy with half as much. There´s something slightly gruesome to me about eating 100 full-grown animals as a midday snack. 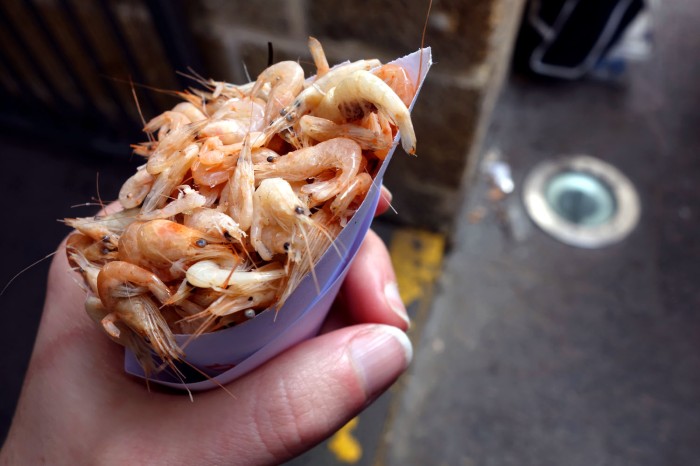 We also tried some sea snails, fresh from the market, simple boiled and served with toothpicks with which to pull the soft bodies out of their contorted shells. They were a bit of a hassle to eat, especially standing up and holding the plate in one hand (they´re definitely a two-hand snack). The bodies were chewy and slightly muddy in flavor with a dirty little bit at the interior end that had to be scraped off, along with the calcified “cap” that plugged up the entrance of the shell. Maybe sitting on a terrace with a glass of white wine and some lemon squeezed over I would have had more patience to enjoy these little mollusks. But they were pretty to look at, anyway. 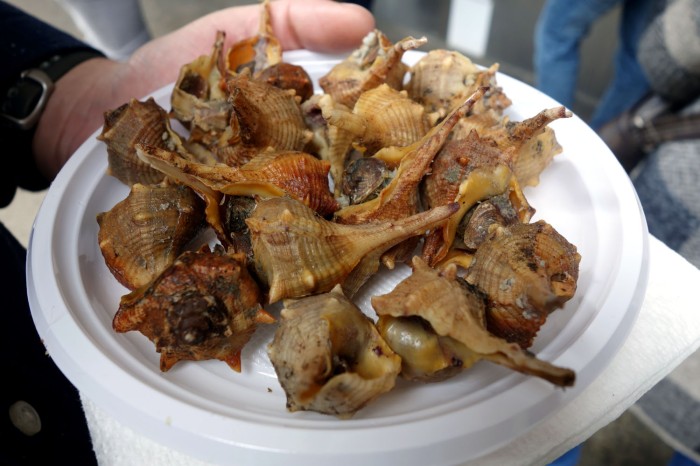 Next, we walked by these two guys chopping live sea urchins and selling them on the half-shell at a table outside. After hearing the price, 6 for €3, we immediately got in line to try some. One of them set about chopping, grabbing each purple-green urchin from a tall pile, laying it down on a wooden cutting board and, amidst its inaudible sea urchin screams, separating it into halves with one deft move of the knife. The other guy arranged the halves carefully on a plate with a half of a lemon to squeeze over and a little plastic spoon to eat with. He handed them out to hungry customers.

There were some regulars who had the foresight to stay at the table and use it as a bar to on. We, however, wandered off and struggled to find a way to hold the plate, while also holding the urchin shell in one hand and scooping its soft, quivering gonads out with the other. (This is another two-hand snack.) Word of advice: Make like the locals and don´t leave. 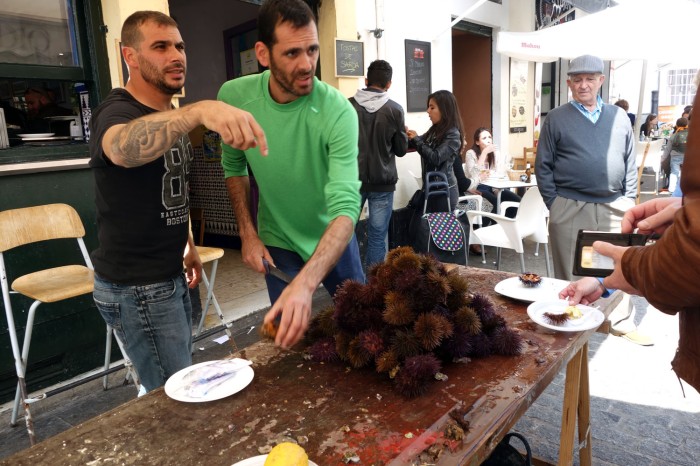 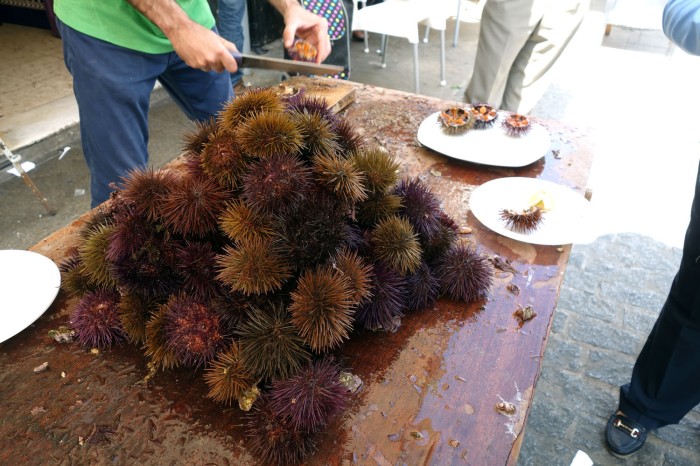 The urchins were absolutely delicious, like shots of murky seawater but in creamy roe form. They were, I think, still alive as we sipped on and swallowed down their private parts, some bright red and others a paler orange in color. They were also, of course, gloriously uncleaned, which did not seem to bother the portly local woman in front of us, who took down about a dozen on her own without even looking at what she was eating. It certainly didn´t bother me, either. We scooped up the roe sacs and left the blackish brownish sludge of half-digested urchin breakfast in the shell. There were also a few coated with a mess of white, creamy stuff and, although it is usually best practice to not eat unidentified white, creamy stuff from seafood being sold on the street in a city that you´re unfamiliar with, we did it anyway. It wasn´t too bad at all. Each spoonful carried that wonderful flavor, so unique to uni: that stinky, seaside brine mixed with that seductive sweetness, somewhere between ripe and rotten. It´s a flavor that no one has lukewarm feelings for – you either love it or despise it with equal passion. 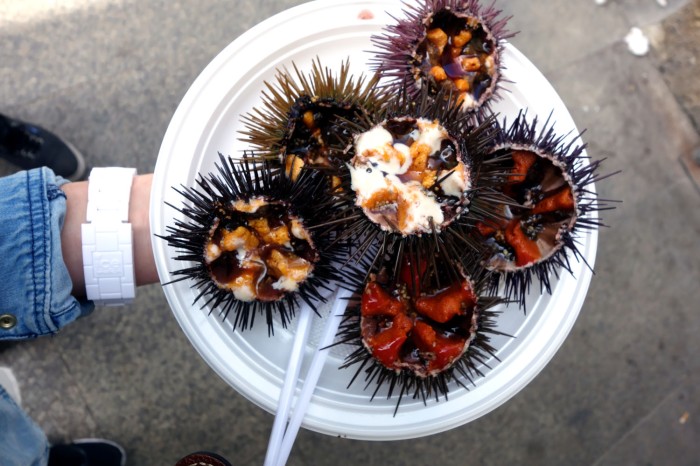 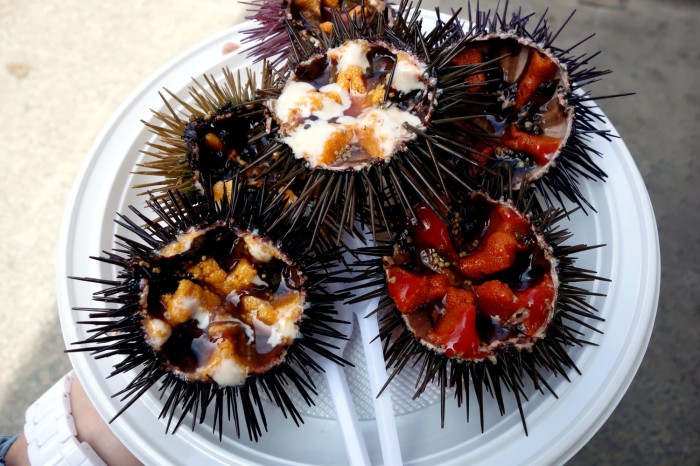 It was good fortune that brought us to all this delicious (and very cheap) street and stall food at the Mercado Central de Abastos, as it kept us energized for the rest of the day, enough so to carry our backpacks around and enjoy the wonderful city of Cádiz on foot.

Stranded in a carelessly chosen AirBnB in the crappiest neighborhood of some middle-of-nowhere little industrial town called Puerto Real (doesn´t get much more “real” than this place, that´s for sure…) later that day, we would be having dinner at the only “restaurant” that was open at 10 and didn´t look like someone had been shot in the head in front of it just minutes before, Burger King. As we feasted hungrily on our Whoppers and Crispy Chicken Sandwiches, thankful that the BK Lounge – at least – existed in this creepy little commuter town from hell, we remembered all the wonderful seafood we had seen at both the market and at restaurants in the epically beautiful Cádiz just 15 km away. But no car, no train back after 22.30 and no desire to spend €80 on a taxi meant onion rings and french fries instead of crispy fried anchovies and gambas a la plancha. It wasn´t until the next day, our nutrition-free dinner fully digested, that we would return to the ancient port city for what would perhaps be the best meal of our trip to Andalucía…