I only learned about Belle Isle Seafood Restaurant a few years ago, only a few years after having spent almost three years living a ten minute walk from it, and a ten minute walk from not much else. I spent three years commuting daily for an hour from East Boston to Cambridge, from Orient Heights to Harvard Square with a heavy laptop bag and backpack in tow. During this time I neglected my pristine Quincy House dorm room for a three-bedroom suburban den of college boys that forever reeked of weed and hangovers, sacrificing my social life for what I misunderstood to be love. I was 20-ish then and thought that’s what you were supposed to do. It was my not-so-great first experience living with a guy. Anyway, East Boston was not all bad. El Paisa Colombian restaurant made a kick-ass bandeja paisa with crispy chicharrón and plantains. Rincon Limeño was great for ocopa arequipeña and braised goat stew (not to mention it was the only Peruvian spot in Boston where I found leche de tigre as its own dish). And Donna´s around the corner was good for enormous and ultra-caloric Sunday morning brunches. We even went to Santarpio´s once or twice. But most of the time it was the PuPu platter from Great Chef – the spareribs, the egg rolls, the fried shrimp, the chicken wings, the pork strips, the teriyaki beef, the scallion pancakes, the cheese rangoons – that would win out over all else, even over cooking at home. For so long I pretended I didn´t mind. But I really did.

And we never went to Belle Isle. I had to move away from Eastie, away from Boston, away from the U.S., live in a handful of countries only to find someone to bring home with me as a Thanksgiving date and to take with me to East Boston, someone who would trust me enough to take that hour long outbound journey on metro and on foot, cross the Saratoga bridge and enter an abandoned looking industrial structure overlooking the Belle Isle inlet in the sleepy seaside town of Winthrop, Massachusetts. I told him it would be worth it and he believed me. 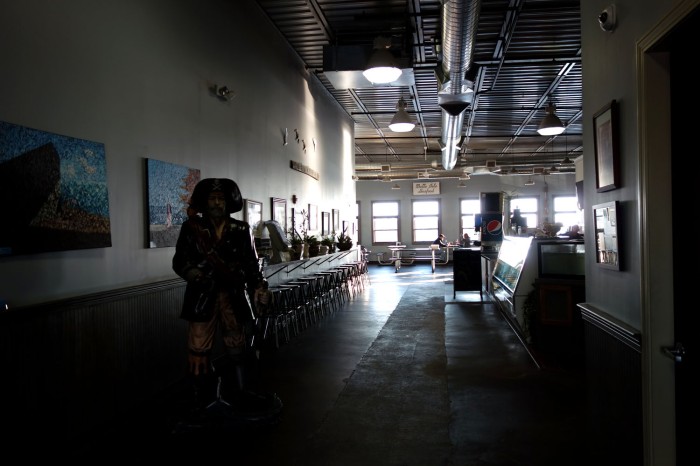 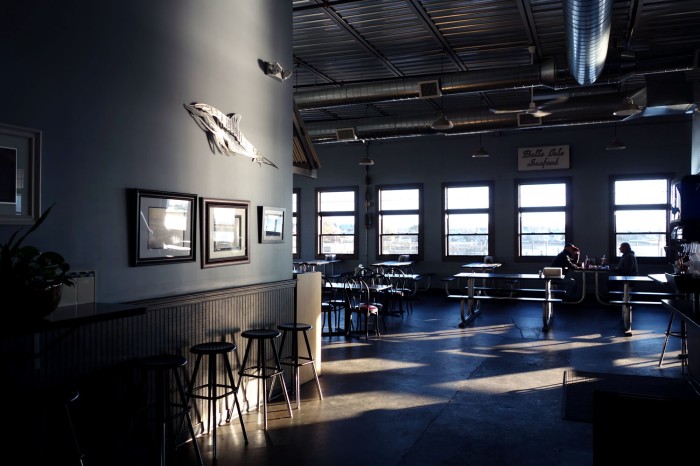 Starting out as a much smaller seafood shack in East Boston, this place became so popular that owner Jim Costin had to adopt a larger venue in a rusty metal warehouse in Winthrop. It looks intimidating and a bit empty from the outside, save for the plastic sandwich board promising “Live & Kicken’ Lobsters” just outside. Upon walking in you´re greeted by a pretty creepy life-sized pirate figure, no doubt put there “for the kids”. The counter is to the righthand side, with a huge board displaying the menu. Further down are the benches lined up alongside large windows that allow the late afternoon sunlight to filter softly in, casting an eerily beautiful pattern of shadow and golden light across the space. The view is spectacular. You can see everything from the Bunker Hill Memorial to the Zakim Bridge, the entire skyline of Boston and the airport nearby. Every time a plane takes off it looks like it could fly right through the window. For those not used to this proximity, it´s pretty damn cool. There´s also an outdoor terrace right on the inlet to enjoy the view during the summertime along with the soft breeze of the ocean from which all those fresh products came. Due to the size, remote location and sheer majesty of its surroundings, the place could be an ideal event venue, but I’m sure someone has already thought of that. If I still lived in Boston it’s where I’d be turning 27. 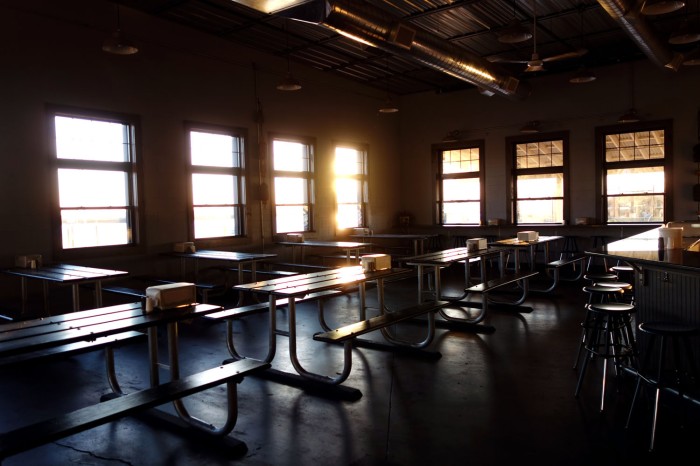 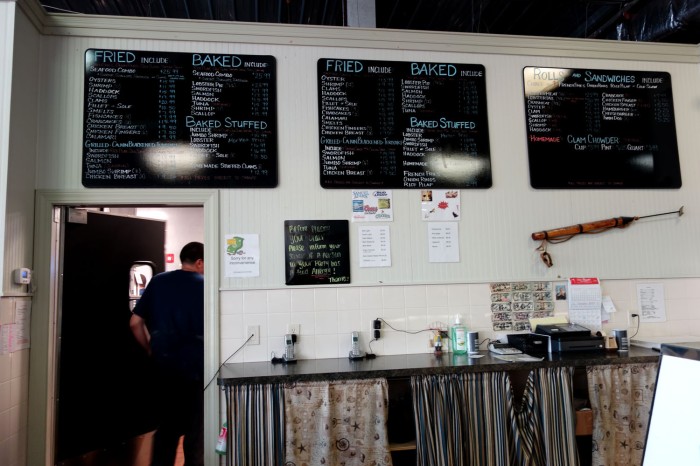 The menu is beautiful, the seafood fresh, the prices right. The signature is their massive lobster roll but they´re also known for their lobster pies (baked with butter and bread crumbs), their fried clams and oysters, their plump crab cakes, blackened swordfish, and their fried/baked scallops, shrimp and haddock. Side orders are homemade (coleslaw, tarter sauce). So is the chowder. The restaurant doubles as a seafood market, with fresh things including shrimp, clams, lobster, crab, calamari, scallops, oysters, steamers, cherrystones, littlenecks, mussels and fish. It´s all there when you walk in. And they got beer and wine too, Sam Adams on draft. We got one of those, my man’s first ever Sam. When you order you get a big plastic lobster that buzzes when the food is ready. We took a seat and stared at it hungrily. 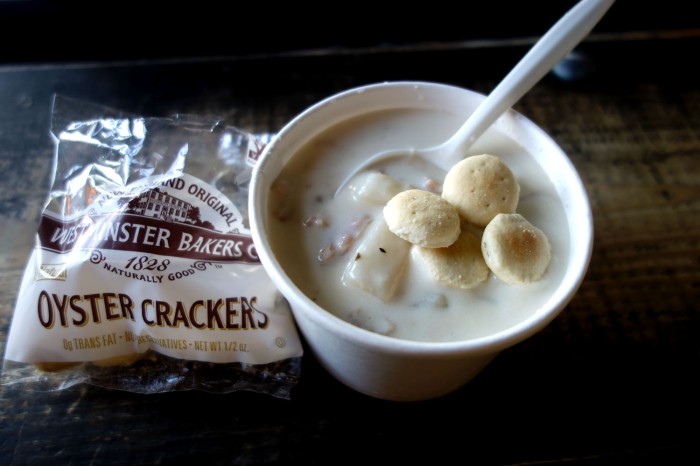 A steamy hot bowl of New England clam chowder on a windy, cold winter day in Boston. There´s maybe nothing better in the world. I remember a chat with a good friend a while back in which we discussed the cliche ¨traditional Boston dishes¨ and whether or not locals actually ate them (or even liked them at all). Boston cream pie, no. Boston baked beans, yuck. Creamy, thick clam chowder with crunchy oyster crackers sprinkled over the top. Yes, any time. Bring it on. I was itching to show my boyfriend this dish and luckily Belle Isle Seafood´s version shines bright in quality and authenticity. The consistency of the chowder is fantastic, velvety smooth and just viscous enough to coat your throat with its rich, milky texture without choking you after two spoonfuls. The potatoes are cooked to a delicate, tender texture, skinned and diced into consistent little blocks. They´re more glossy and soft than waxy or starchy, and they go perfectly with the barely traceable shreds of onion and celery in the broth. This chowder is loaded with cherrystone clams, chewy and wonderful, only slightly gritty with sand. The flavor is a beautiful symphony of marine brine, sweet mollusk flesh and a very feint hint of smoky, salty bacon all wrapped into the clean blanket of cream. If I were only there now instead of in my apartment in Barcelona I would eat a whole bowlful instead of sharing it with my boyfriend to keep light for the rest of the day… When in Boston, chowder. Always. It´s cliche I guess, but with just cause. 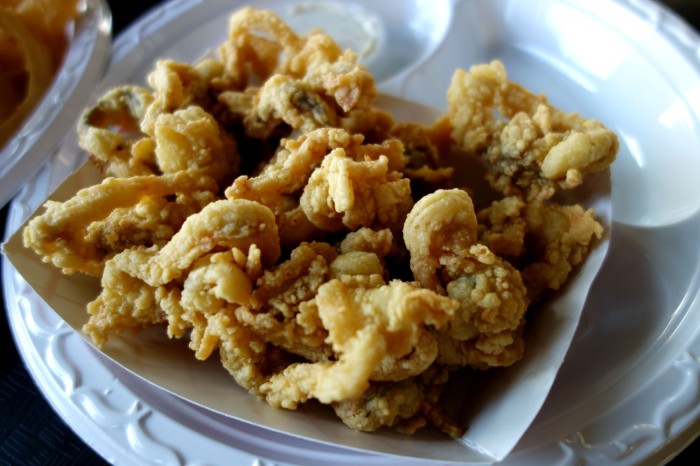 Besides their famous lobster roll I also decide to order something fried. At the counter I asked the girl “I´m trying to decide between the fried oysters and clams. Which is more like -?¨ and made a vague gesture for “juicy” with my fist. I was looking for a specific texture, that crunchy fried coat bursting forth marine juice when bitten into, that fatty little belly jiggling funky ocean brine within its golden brown shell. That. The girl seemed to understand immediately what I wanted and told me that the clam bellies are more likely to give me that. “The oysters are a bit smaller right now; they´re not in season.” We got the clams, the smaller order that turned out to be plenty for both of us. They weren’t the juiciest clam bellies I´ve ever had but that explosion of juice and mushy belly meat was still there. They were by no means dry. The coat was crunchy but light and the flavors were just right. The briny, stinky clams went perfectly with the tart, creamy tartar sauce. The side of onion rings that came with our lobster roll were a good fried thing too, definitely worlds apart from from the crap we´re used to at burger joints in Barcelona. 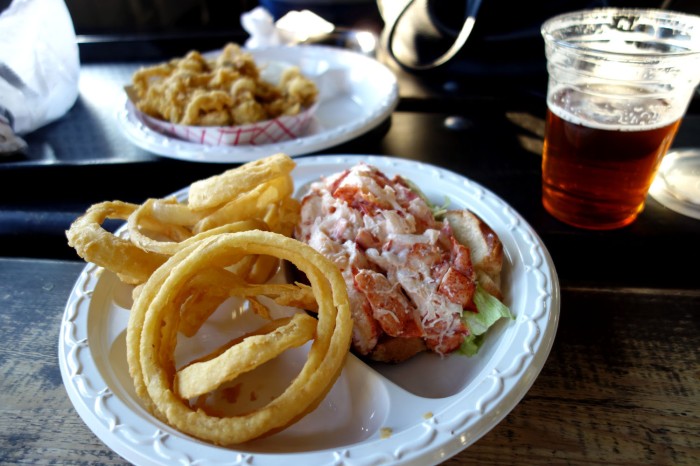 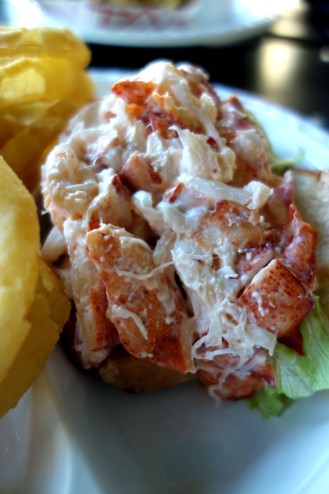 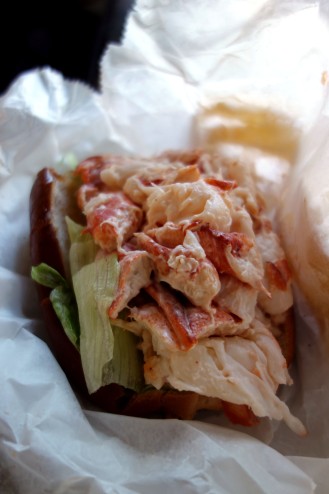 As this was to be my Frenchman´s first experience with a New England lobster roll, I thought long and hard about where it would take place. It boiled down to two options: 1) an elegant oyster bar with dark oak counters, a signature burger and a carefully curated white wine list (B&G, Neptune Oyster, Atlantic Fish Co.) OR 2) a crunchy little crab shack out on the water where you can smell the murky, low-tide brine in which the lobster once did whatever the hell lobsters do (The Barking Crab, James Hook, anywhere on the North Shore). The second category won. If it were up to me I would´ve driven up to Rockport and picked a guy out at Roy Moore, had him boiled up on the spot and cracked him open myself, teaching my man how to do it too.

And while I do prefer the hot and buttered original, the cold and mayo-based version with celery ain´t bad either; especially when you get it at Belle Isle Seafood Resto. The slightly sweet, New England style hot dog bun is quite literally overflowing with lobster meat – half knuckle, half tail – a half pound altogether loaded onto a bit of bread with a (quite unnecessary) little leaf of iceberg lettuce laid in between. It´s messy but just enough for it to be extra appetizing, not to the point where it´s frustrating or gross. The meat is cool, juicy, tender and mixed with just enough mayo (very little) to make it glisten in the setting sun. The flesh is tight and snaps beautifully under each bite, only to melt into tender little fibers after a few chews. Each bite is heaven. Each bite requires a moment of silence, followed by a pensive sip of Sam Lager to truly comprehend, savor and store away the experience in order to fully remember it later on. The slippery smooth filling goes great with the crunch of the slightly toasted roll. It´s a symphony of flavors that takes time to appreciate. 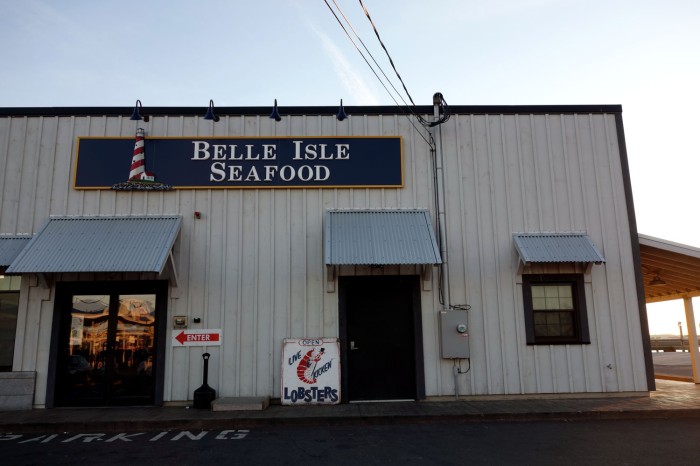 In the very densely packed 4-day sequence of events that was our Thanksgiving trip to Boston, our visit to Belle Isle Seafood Restaurant stood out as one of the most memorable moments. It was a chance to break from sightseeing and enjoy stunning views of the city from the outside. It was a chance to warm our bones, relax our jet-lagged and overstimulated brains and eat good, eat real good in the neighborhood. For the price to quality ratio, for the friendly service, for the down-to-earth vibe and the spectacular vistas I will not hesitate to recommend the place to the next person who asks me where they should get their first lobster roll in and around the Greater Boston area. The best? I’m not sure. I’ve heard good things about B&J and Neptune too. And nothing can replace a trip to the Cape. But for my man’s first and my first in 3 years Belle Isle hit the spot just fine. And for the first time in a long time I got on the Blue at Orient Heights with a big smile across my face.