I really enjoy spending my Sundays hiking to small, very very old towns in the mountains of Catalunya. It´s a great way to burn calories, be under the sun and to collect Instagram snaps of plazas that look like they were taken in the 16th century. These towns are usually pretty similar: they each have a Romanesque church and a plaza right in front of it with either 1 or 2 cafes, depending on the population size (which doubles in the summer). Walking up the narrow streets of these towns is usually more difficult than the hike itself due to the slope. Yet there´s always at least one little old lady tiptoeing up to her own house, but only before 11am of after 4pm. Between those hours nobody wants to deal with the sun, except, of course, the burly French or German mountain bikers clad in their ridiculous neon-yellow and black body armor, chilling with a lemonade or clara (beer+lemonade) at a table outside.

I especially enjoy these hikes when there is good local food involved, the type of stick-to-your-ribs, hearty Catalan grandma fare that is typical of these mountainous towns. This genre of comfort food reminds me of the months spent living in a masía country house in the Priorat and going to one of the same two restaurants every day to get one of the following: grilled chicken, grilled rabbit, grilled sausage, grilled lamb ribs with escalivada (roasted eggplant, peppers and onions) or samfaina (Catalan ratatouille) or mongetes (white beans cooked with bits of smoky pork) on the side. Sometimes there would be peus de pork (pork trotters), other times cargols (snails cooked in a spicy sauce). During these meals I would always be peer-pressured into getting the “lunch menu”, which added to the main dish and side a porrón of red wine, some pa amb tomaquet (bread rubbed with tomato), a salad (usually with a carpaccio of bacalao salt cod thrown in), a dessert (usually crema catalana, which I´m not too found of, or mel i mató, a soft raw goat cheese drizzled with local honey that I absolutely adore), and a coffee. This was always way too much food, the type of meal meant for burly vineyard workers who consumed maybe 10 times the amount of energy tending to the vines as I did typing on my computer in an air-conditioned office. I guess that explains why I gained 7 kg in just 2 months of living there and kept it on until my first week hitting the gym hard in Barcelona. But anyway… This type of food makes me nostalgic now and it makes me really miss those lunches which always left me so satisfied and always just a little bit tipsy. 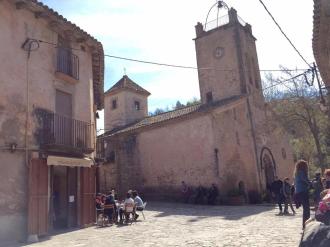 I was excited when a Barcelona-based hiking group posted an event to visit the town of Mura, about an hour and a half´s drive from the city. While the hike itself would take only about 3 hours (which I would usually consider way too short to be worth going) we would be stopping in the town for a short tour and lunch at a place called Hostal de Mura, a gorgeous little restaurant inside a very, very old building with sturdy wooden beams and rough stone exposed in the vaulted ceilings. I checked the menu in advance and was pretty quickly convinced to join the hike. Their kitchen offers all that good rustic stuff I miss in Barcelona: broad beans and ham, black sausage coca (Catalan flatbread), lots of salt cod, pig trotters with snails, roasted pork cheek, and then the grill: chicken, rabbit, lamb, beef, entrecot steak, txuletón steak, five types of sausage, etc…

When we got there, the group sat at a long table and ordered a set menu each. As I already knew what I wanted and as I did not want to make the mistake of ordering too much at a restaurants I suspected of having gigantic portions, I offered to split a salad and a main with my friend and ordered a Trinxat de la Cerdanya, a dish I had been dying to try an authentic version of. I´m happy to announce that I got it. But before that there was a salad…

Since both my friend and I had picked rather filling and meaty firsts and seconds, we decided to split a salad with just veggies from l’Hort del Molí (a nearby orchard). It was perfectly fresh, vibrant and colorful, sprinkled with dry herbs and some walnuts as well. The greens were so flavorful that we actually forgot to add oil or vinegar. Truly a pleasure to both look at and consume. 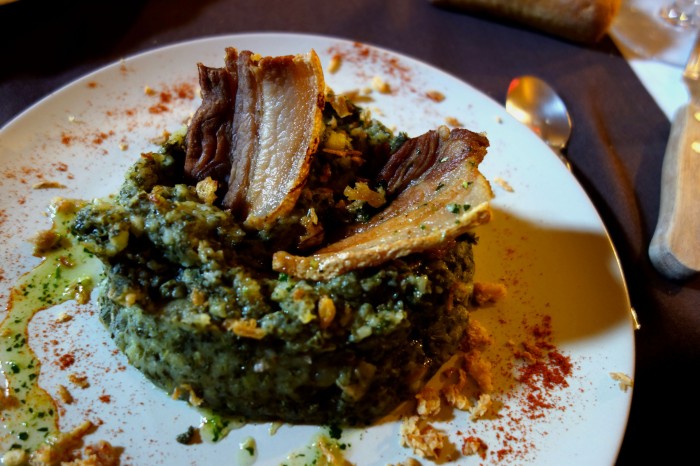 And then the Trinxat de la Cerdanya, the dish for which I had come. I first tried it at an awesome little restaurant named Santagustina in the Plaza Agusti Vell, tucked away on the quieter and less touristy streets of el Born. This traditional comfort food comes from the Cerdanya region near Andorra in the Pyrenees. It consists of potatoes, winter cabbage, garlic and oil mashed together until creamy (though still quite lumpy) and often served with some sort of salty pork. I´m particularly fond of the stuff because it reminds me of a Hungarian nostalgia-inducing socialist-era cheap-food named főzelék made by adding a thick roux to boiled veggies. Santagustina´s version had bits of butifarra negre (blood sausage) mixed in, adding an herby, funky flavor. It was a nice way to jazz up the otherwise mildly flavored dish, but it also took some attention off the natural sweetness of the cabbage.

The trinxat at Hostal de Mura was divine. It was soft and warm and unnecessary to chew, with the subtlest flavors of cooked cabbage and potato jazzed up with garlic and very good quality, light green olive oil. Sticking out of the high pile of mash were two thick slices of bacon, very salty and smoky in flavor. Some parts of the meat were a bit tough and difficult to cut, but some of the fattier areas were tender, melting in the mouth readily and adding some sharp salty meat flavor and grease to balance the otherwise very clean and modestly flavored trinxat. I loved the dramatic presentation of the dish as well: the plate was sprinkled with bits of pork crackling (chicharrón) and bright red paprika powder, and also drizzled with good quality oil. 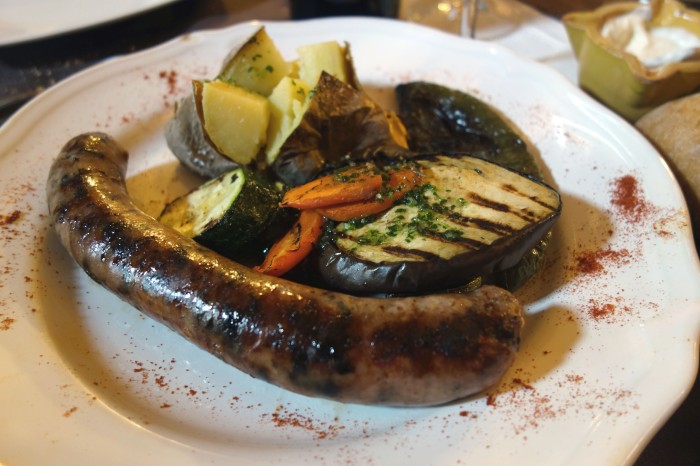 For our second course my friend and I shared a Botifarra de la Trompeta de la Mort, a grilled pork sausage made with black trumpet mushrooms locally foraged in the mountains of the Sant Llorenç del Munt i l’Obac natural park that surrounds the town. Like Priorat, this region is perfect for mushrooms – rovellons (pine mushrooms), ceps (Porcini mushrooms) and camagroc (yellow-footed chanterelles) are never in short supply…
The sausage was wonderfully juicy, with the tight natural casing snapping loudly when sawn into and plenty of steamy, salty meat juice flooding forth from the fracture. The sausage was grilled to a perfect texture, crunchy and charred on the exterior and very moist inside. The flavors were great too. The filling carried the deep, earthy flavors of the trumpet mushrooms, which added a great umami essence to the otherwise clean, sweet flavors of the ground pork. There was maybe a tiny bit too much salt in the mix for me, but that´s if I´m being very picky about it. Plus, we ended up asking for some aioli on the side and got a rather large amount of the garlicky condiment to slather onto our sausage. The sting from the garlic masked some of the excess salt, but did not overpower the strong funk of the mushroom.
Served on the side was an unexpectedly gorgeous little salad of roasted eggplants, zucchini, carrots and potatoes drizzled with the same awesome herbed olive oil that adorned my trinxat. The vegetables were perfectly cooked, not overcooked but just caramelized enough and not suffocated by too much oil. 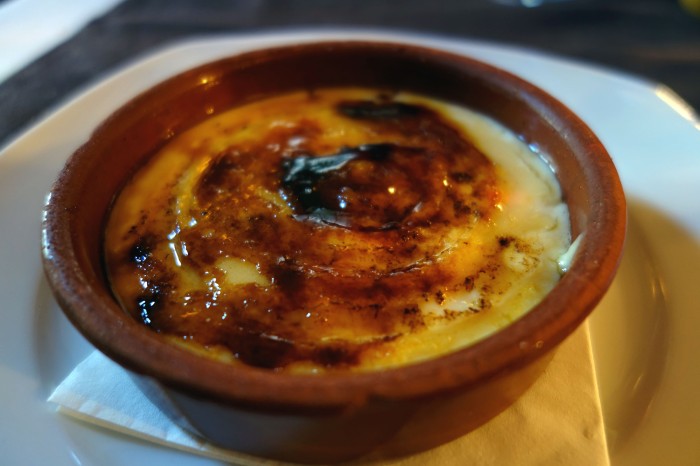 We didn´t want dessert but the lactose intolerant woman sitting next to us (who had nevertheless opted for the menu) offered us her Crema Catalana (Catalan crème brulée), and we took it to share. I´m not a major fan of the stuff. It´s rich and creamy, sure. But the flavors are too dull for my taste and the burnt caramel on the top always seems to leave the impression of burnt fuel on my palate. It´s fun to break through the top layer and to lick the eggy custard slowly off the spoon in layers, but that´s about where my enjoyment of this dish ends. I´d trade it in for a nice cheese board or even a few bites more of that sausage any day.

Catalan mountain food is a fantastic choice for the après-hike meal, when you need something substantial and robust to help you recover your energy. This meal was a great example. We left Hostal de Mura very full and pleasantly buzzed, though not too weighed down by either food or wine to continue exploring the little town.