There had been a lot going on in the month of October with a trip to Barcelona, getting back to work, back to school, going to Rioja with school, and the next day leaving to Boston with a 22-hour layover in Lisbon. Somewhere in the middle of all that I met a friend from work in Bordeaux, whose last day at said work had also just been a few days before, to take a breath and catch each other up on all of the things that had happened. So we grabbed a beer and headed over to Chez Boulan near the Halle des Chartrons for a light seafood dinner.

We sat at the bar, across which three aproned gentlemen in quirky straw hats moved around, one assembling small plates, another shucking oysters, while the third arranged the mise en place for larger dishes. Between us and them was a counter overflowing with fresh local produce – a veritable cornucopia of pumpkins, cabbage, kohlrabi, kale, tomatoes – next to a baskets of fresh seafood on ice – bulots, palourde clams and wild shrimp. There is also a little family of sprouts growing on wet tissue in a bowl and cute stuff like that all over the place. The assembly line is completely open for scrutiny, but the place clearly has nothing to hide.

We sat and ordered a dozen oysters each, 3’s and 4’s of Ferret Capienne, sourced directly from Cap Ferret nearby. And with the briny, salty little things a Chateau Peyrat 2005 from Graves. Alongside we also ordered some bulots, which came generously seasoned with herbs like rosemary and thyme. And, of course, the mayonnaise whose bright yellow glow expressed plenty of fresh egg yolk and hinted strongly at having been made in house. Absolutely perfect for dipping purposes.

Needless to say, the mollusk portion of the meal was great. The oysters were still a bit on the milky to fatty side, but that’s how I prefer them anyway. And the bulots were nicely cooked and even more nicely seasoned.

When reviewing raw or just boiled seafood, though, I’m really commenting on the terroir, the farmer and the guy at the restaurant who chose that farmer to source from. Same goes for a steak served rare. And while I could rattle on about the feeling of sitting in the middle of Bordeaux eating such fresh oysters, still dripping marine brine with each last exhale, I prefer to focus on how a restaurant transforms its raw ingredients rather than on the beauty of just leaving them as they are. So, moving on to prepared dishes… 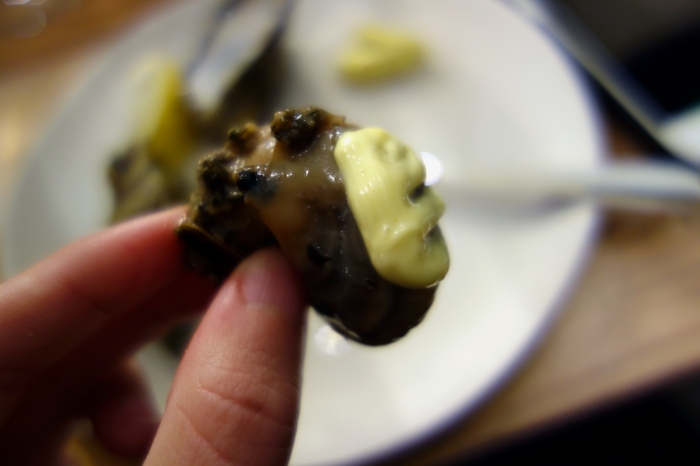 For my main I ordered Chez Boulan’s Classic Ceviche, which comes with slippery little lumps of white-fleshed wild sea bream swimming in a tangy leche de tigre, surrounded by uneven cubes of sweet potato, cancha (toasted corn), some pickled bits of red onion, slices of radish, aji amarillo and leaves of coriander over the top. A gorgeous plate of food to look at and photograph. The fish was perfectly tender and the sweet potato pleasantly rare with a bite that offered textural complexity, along with the crunch of the corn. Overall a delicious dish, though the sweetness of the potato was a bit overwhelmed by the acidity of the juice.

I also tried the fish special of the day, which was a gorgeous filet of cod topped with a verdant spinach cream, slices of scallop, all mounted on a bed of julienned carrots, tomatoes, fresh spinach leaves and walnuts. The fish slipped effortlessly into tender flakes, melting in the mouth, a blank canvas for the subtle vegetal flavors and sweetness of the scallop. I also really appreciated the walnuts at the bottom, which offered a pleasant crunch along with a toasty flavor to complement the flavor of the spinach. 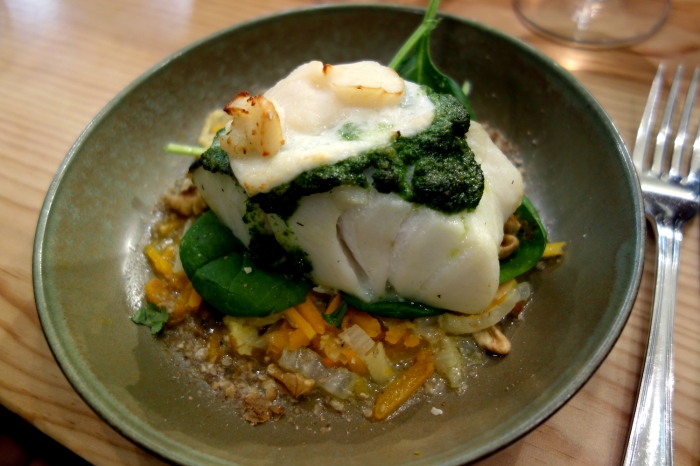 On the side we also got Chez Boulan’s sweet potato fries, which came with this frothy, fluffy, wonderful Morbier cheese sauce and dried wakame sprinkled over the top. These were nothing short of phenomenal, a definite must-try Chez Boulan. The tangy cheese balanced the caramelized, roasty-toasty sweetness of the potato perfectly. The fries were crisp around the edges and creamy smooth inside, while the cheese foam offered a velvety smooth, yet surprisingly light texture to the mix. 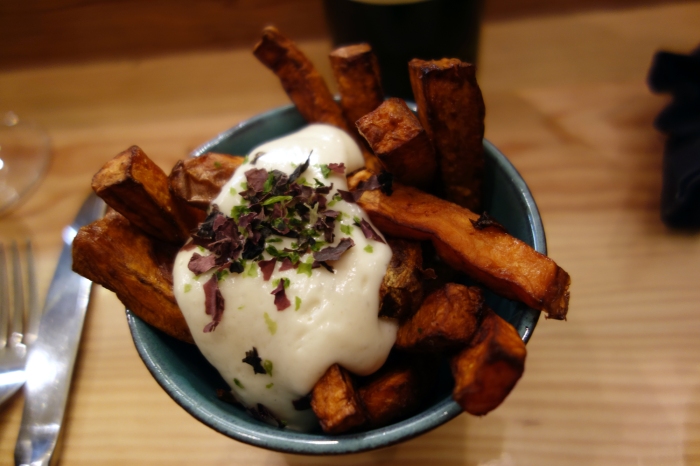