After a scenic and vigorous hike in the Parque Natural Posets Maladeta, my brother, my boo, my sister-in-law and I returned to our apartment in the peaceful mountainous village of Benasque, hungry for something hearty and rich. It was also the night of the Germany-Russia game of the Eurocup, one of the most anticipated matches of the first round and one that all four of us were eager to watch, preferably while hacking away at a mountain of beef or local lamb. TripAdvisor was vastly unhelpful, as always, recommending only the flashier spots, “fine dining” and some Tex-Mex joint named the Hot Chili Grill. Neither of those did we want in a sleepy town in the Spanish Pyrenees. What´s good here? Lamb definitely, rabbit, maybe trout, beef, beans and roasted vegetables like eggplant and pepper probably. Fried calamari? Probably not.

My sister-in-law had remembered passing a cozy spot called Asador Ixarso during the week they had already spent there for my brother´s conference, so we went there, booked a table across from their TV and got a beer at an Irish bar nearby while the reservation before us was finishing up. As it turned out the two guys ended up ordering a bottle of wine and sticking around for quite some time (not even watching the game…) so we were a tiny bit impatient as we approached the small bar between the dining room and entrance. The staff did absolutely everything to make us feel welcome while we waited, filling our wine glasses up quite high and bringing out some complimentary bread with sausage and olives to nibble on. Our host even personally apologized for the situation, one which was quite obviously not her fault at all. Eventually the two gentlemen got their bill and we were seated shortly after, with the table cleared in a matter of seconds. 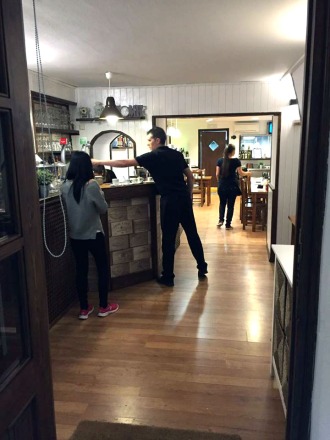 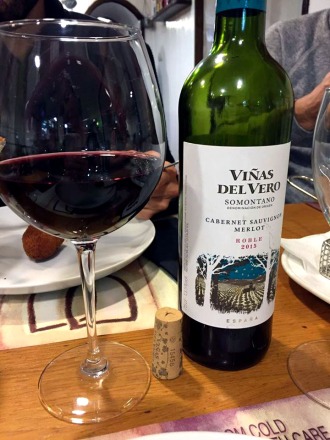 Having suffered through quite a few horrifying experiences with service in Barcelona and having gotten used to that standard in the past year and a half, it was a very pleasant surprise to receive this type of authentic care and consideration from the host of a restaurant that was, by the looks of it, doing well enough with or without our business. For anyone going to Benasque, a hiker´s paradise surrounded by the highest peeks of the Pyrenees, I recommend having dinner here at least once during the trip. The place is simple, charming and smells like heaven as soon as you enter. The waitress was friendly, chatting about the bottle of wine we ordered and making sure we knew which croquettes were which before leaving us alone to eat them. The prices, by Barcelona standards, are very low and the food, as it turned out, was absolutely delicious.

Rustic mountain fare, hot off the grill, with a bottle of ruby-red Huesca house wine on a chilly summer evening after a long day of exercise and breathing fresh mountain air. Yes. A memorable evening among good company, lively conversation and friendly debates. Exactly what we had all been hoping for out of this first dinner together in months. 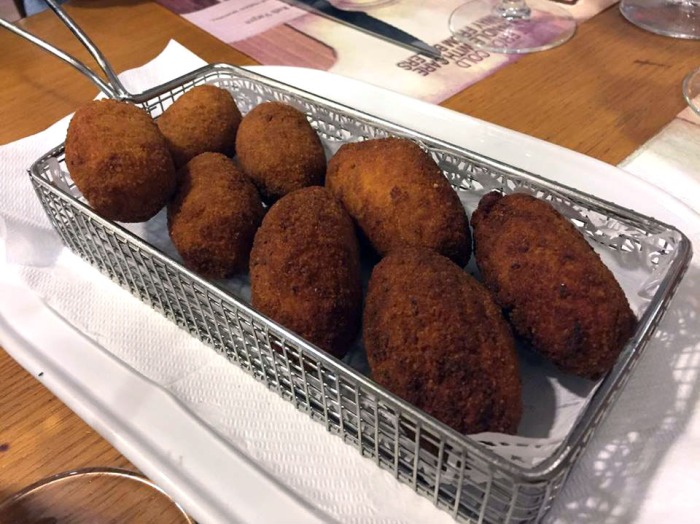 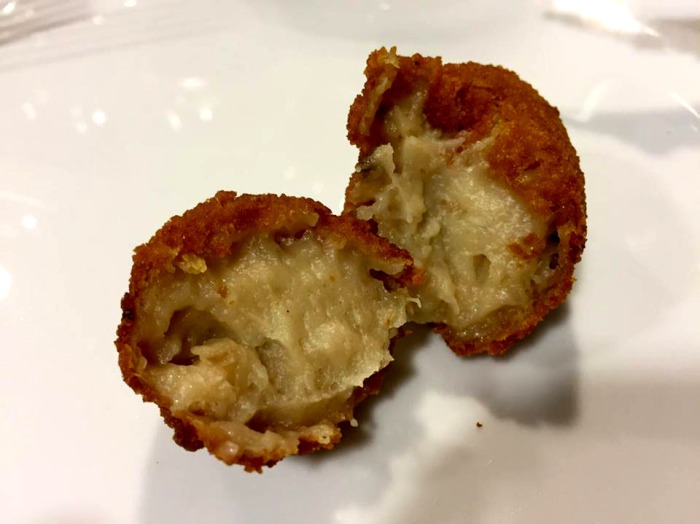 To start our hearty meal with a hearty appetizer we got their signature croquetas, half with wild boletus mushroom and half with cured ham. As far as croquettes go they were delicious – rough and grainy on the exterior with a pleasant crunch when bitten into, creamy and thick on the inside with tiny bits of ham or mushroom running through. They were fried golden brown and served piping hot, no evidence of excessive grease anywhere. Not a bad start. 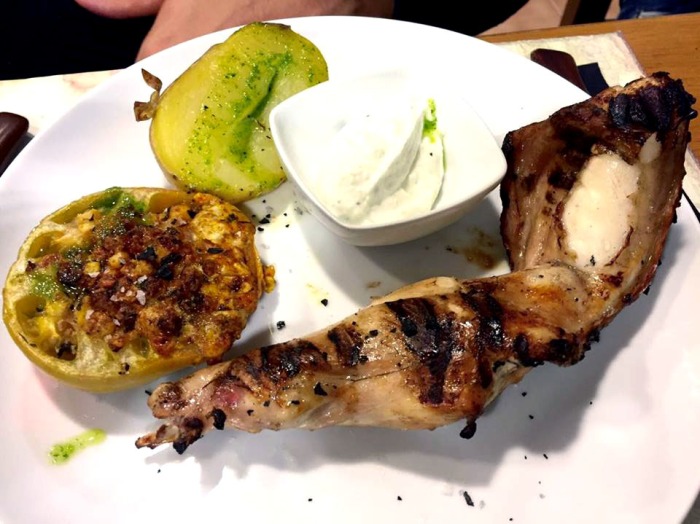 My brother got the char-grilled rabbit, which came with a grilled potato, half of a gratinée tomato and a rammekin of creamy, garlicky aioli. This is for sure one of the leaner options on the menu but very satisfying, as the animal had quite a bit of meat on its bones and was cooked to a great juicy consistency. 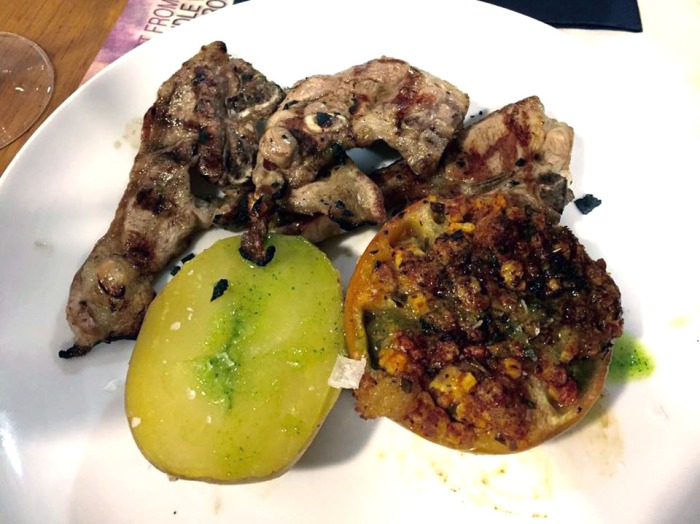 My sister-in-law had the grilled cordero (lamb) with the same house garnish of tomato and potato. From the bite she shared with me I gathered that it was properly cooked, with a wonderful combination of fat and smoky char from the grill. 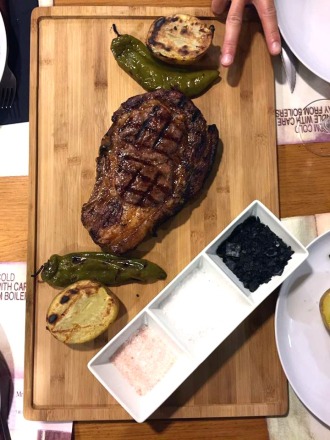 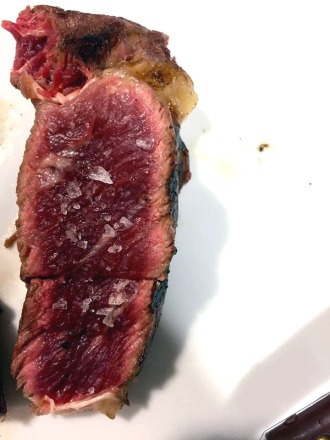 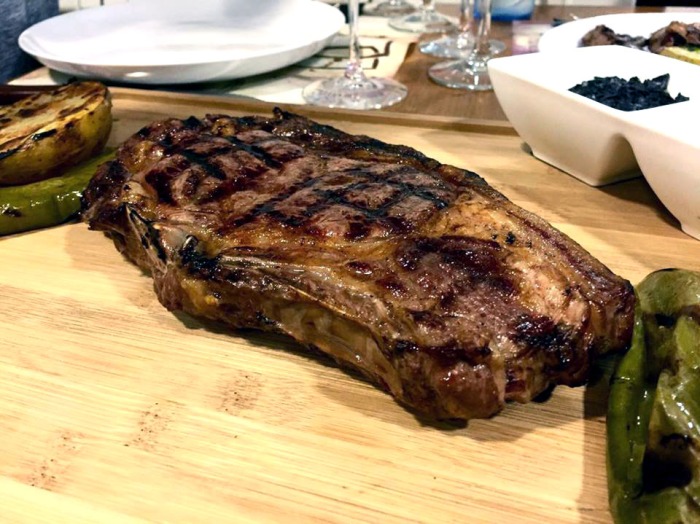 And for the bae and me, a chuletón para dos, a majestic oxen T-Bone served on a chopping board with some grilled green peppers, potatoes and a trio of salts (black rock, white sea, himalayan). The cut was first brought out and introduced to us in its raw form. As we nodded approval, it was rushed away, seared to absolute perfection, served with a smile and then taken back to be reheated after we had sawn off about half of it. It was perfectly juicy and rare on the first round, and only slight more well-done on the second. Good quality to begin with and treated with care to coerce the most satisfactory texture and flavor out of the flesh.